Fuente de Piedra was like the North Sea
Mick Smith, Ellie Wallbank, Juliet and I travelled to Laguna Fuente de Piedra Nature Reserve on Saturday to meet up with fellow members of the Andalucia Bird Society for our January Field Meeting and to attend our annual Financial General Meeting. 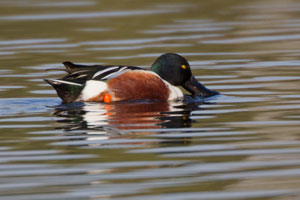 The plan was to meet at 09:00, do some birding and then assemble at the Visitor’s Centre at 11:00 for the Financial General Meeting.
As the weather forecast was very bad a number of members had decided to miss the birding and only attend the Financial General Meeting.  As I was leading the day I decided to be at Laguna Fuente de Piedra in case there any members turned up at 09:00 and wanted some birding.
The weather forecast was correct as the weather, initially, was dreadful with torrential rain and gale-force winds and a temperature of around 6C.  It was coming from the west and the clouds were solid, grey and low, which meant that the light was very poor.  Around 11:00 we noticed brighter periods were beginning to appear in the solid grey clouds and around 12:00 the cloud had broken and patches of blue sky appeared.  It remained like this for the rest of the day with large dark grey clouds being blown across the sky bringing very heavy showers.  Between the showers we had blue sky but the wind did not weaken and it remained cold throughout the day.
Mick and Ellie immediately went to the hide overlooking Laguna Del Lagueneto.  They choose that hide because it was totally enclosed and provided protection from the weather.  Juliet and I waited in the car park until 09:30 but no-one did turn up so we decided to join Mick and Ellie at the hide. 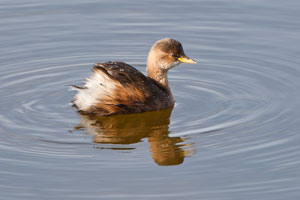 There were about fifty Northern Shoveler on the laguna sheltering against reeds on its western shore and the number slowly grew to about 100 birds as more flew in to join those already there.  Other ducks included a pair of Mallards and nine Common Pochard.  There were also three Little Grebes and about twenty Eurasian Coots swimming and feeding on the laguna.  Also feeding in the laguna were three adult and two juvenile Greater Flamingo.  The water was deep enough to completely cover their legs and the lower part of their bodies.
Flying over the laguna there were five adult Black-headed Gulls still in their winter plumage, a single Common Snipe, about twenty Spotless Starling and about eighty Jackdaw who seemed to be having a lot of fun flying in the gale-force wind.
Ellie and Mick had also disturbed a Little Owl when they initially approached the hide and while we were watching birds from the hide we were entertained by several rabbits running around in the rain. 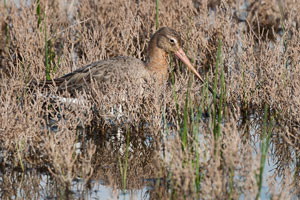 At 10:30 we left the hide for the Visitor’s Centre to prepare for the Finance General Meeting.  The wind was still howling and the rain was almost horizontal but we did have a quick look at the main Laguna.  It looked more like the North Sea.  It was overflowing with water and the wind was blowing the surface into waves and most of them had white horses riding on the their crests.  The water was coloured a cold grey and some areas were a muddy brown.  There were three large groups of Greater Flamingo, each  containing at least two hundred birds, positioned in shallow water where the birds were getting some shelter from the weather.
After the Financial General Meeting most of the members went for lunch but a few of us (the more hardy types   ) continued birding.  The time was now around 13:00 and the weather had changed.  The wind was still as strong as ever but the rain had turned into heavy showers.  We visited the laguna called Los Juncares – it is the one with the boardwalk across it.  We walked across the boardwalk and along the path on the other side.  On the laguna there were about ten Black-winged Stilt, three Black-tailed Godwit and three Common Snipe.  From the path, on the other side of the laguna, we saw over twenty White Wagtail, a Robin, Stonechat, Chaffinch and a flock of fourteen Lesser Short-toed Lark.  We also saw a pipit but could not identify it because we could not keep the scope still in the wind. 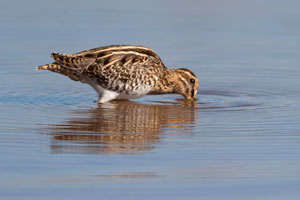 Flying above us were at least twenty Eurasian Crag Martin feeding.  They were enjoying flying in the strong wind and I was surprised that their flying prey was also able to fly in such a strong wind.  Among them were definitely two, probably three House Martin.  I think this is the earliest in the year that I have seen this species in Andalucia.  Also gliding overhead was a solitary adult Common Crane.
Among the shallow pools between the path and the main laguna we saw Little Egret and Cattle Egret, a solitary adult, Yellow-legged Gull standing, Mallard, Northern Shoveller and Eurasian Teal.  Returning to the car we saw Common Chiffchaff feeding in the tall reeds on the Visitor’s Centre side of laguna Los Juncares.
We then headed to Laguna Dulce and followed the road on the western side of Laguna Fuente de Piedra.  Along this road we saw a Black Kite, a female Western Marsh Harrier, several Crested Larks and a Lapwing. 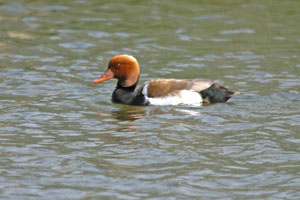 Also, we saw several hundred Common Crane feeding in an area of open farmland and close to them was a huge flock of Spotless Starling flying and feeding in a grass area.  We were not close enough to determine whether there were Common Starling among them.  There were also about fifty Lesser Black-backed Gulls standing in a sheltered valley and as we got closer to Laguna Dulce we saw several hundred more Common Cranes feeding in farmland.
Laguna Dulce was similarly affected by the weather as Fuente de Piedra so most of the birds were around its edge.  However, swimming in its middle were two male and two female Red Crested Pochard and close by were three male and three female Pochard.  Around the edge were about thirty Northern Shoveller, about sixty Eurasian Coot, and a few Mallard.  We also saw a Moorhen, a male Black Redstart, and a White Wagtail.
To the right of the hide along the edge of a shallow pool in a farm field we watched two Otters playing.