Up before daybreak and in time to see the Yellow-legged Gull and Lesser Black-backed Gulls feeding on the shore as I breakfasted but it was not long before Mick Smith and I were on our way to Jerez to meet up with the other members of the Society for a day’s birding along those marvelous sites adjacent to the eastern bank of the Guadalquivir.  The journey produced a pair of Carrion Crows and a Common Buzzard plus a few Cattle Egrets before we twenty members, including three officers of the Society, set off in four vehicles under the impressive guidance of fellow member Stephen Daly.  The previous night, local television had predicted thunderstorms, lightening, rain and all sorts of tempests.  In the event, whilst we saw distant cloud and rain, the little cloud quickly cleared, there was no wind and the day grew warmer and warmer as each hour passed. What a cracking way to spend a day birding at terrific sites and in good company.

Travelling via Trebujena to the river we had many Wheatears and Spotless Starlings plus a small party of Red-legged Partridges, Common Buzzard and Willow Warblers.  The first pool produced the expected Little Grebes and Little Egrets and even a departing Common Snipe.  Then, in the clear waters adjacent to the road, our first stop and the chance to see a wide range of water birds and waders; we even had a Red Kite pass over to see what was happening below.  Lots of Mallards and Northern Shovelers and, of course, very many Greater Flamingos.  The great majority of the last were juveniles in their dull brown and white feathering but we were to see hundreds of handsome adults a little later on when we reached the salt pans.  There were scores of Avocets and Black-winged Stilts plus Eurasian Coots and Moorhens.  More searching produced a sleeping Northern Pintail, a pair of Black-tailed Godwits and a couple of Teal.  Meanwhile, behind us in the fields, there was a very large flock of Calandra Larks and regular sightings of Stonechat.

Then it was on to the track that took us down past the salt pans and all the way through to Bonanza.  Before long we were recording a variety of waders including Redshank and Common Sandpiper with Western Marsh Harriers all around and numerous small flocks of both Short-toed Larks and Lesser Short-toed Larks.  A Green Sandpiper flashed by and then, as well as both Little Egrets and Grey Herons, a solitary Great White Egret made its way over the fields.  A small number of Eurasian Spoonbills were disturbed up ahead and then we found our first of many Ospreys of the day.  Rather lovely to see the bird perched on top of a dead tree and, later, flying, fishing and eating.  No sooner had we tuned in than we had both a resting Common Kestrel followed by a rather leisurely departing Peregrine Falcon.  Wow!  The next raptor was a Booted Eagle, more of a “mid-range” rather than either light or dark morph.

Nearing the end of the grass and sand mix, as we approached the working salt pans, the first Black Storks.  Not many but after lunch we were to see a flock approaching ninety in number plus a very large flock of Eurasian Spoonbills. Also in the area was a small flock of feeding Lapwings whilst, over the river, we had first a Caspian Tern quickly followed by a Slender-billed Gull, Whiskered Tern and a Sandwich Tern.

The last stop before a well-deserved lunch in La Algaida was at a couple of near-empty salt pans which were heaving with small waders.  Dunlin, Little Stint, Ringed and Kentish Plovers plus a couple of Grey Plovers for good measure soon had us drooling through our bins.  The fact that we also had Black-headed Gulls, Common Greenshank and lots of Black-tailed Godwits seemed almost incidental!

Lunch at La Algaida was also impressive – and tremendous value for money.  I am not sure when I last saw so many servings of fresh fish and chips!  Following lunch, we moved on to the back of the small pool at La Algaida rather than view the water from the hide accessed through the woods.  This certainly gave a much better impression of the whole pool (I always thought, based on viewing from the hide, that it was a relatively small sheet of water) and revealed just how much was to be seen.  Not only Mallards, Eurasian Teals and Eurasian Wigeon but, to cap the lot, at least ten Marbled Ducks.  All three Grebes (Little, Black-necked and Great Crested) were present along with the Moorhens and Eurasian Coots and in the reed at the back a couple of individual Night-herons.  Swallows fed over the water and a Common Kingfisher flashed by on two occasions.  There were both Iberian and White Wagtails plus Common Chiffchaffs and Willow Warblers in the trees at the side of the water.  Some were fortunate enough to see the Spanish Sparrows in the tree on the island whilst others had a good view of a small number of Common Waxbills.  Back to the water and we were able to locate a Northern Shoveler plus a few Gadwall and, as hoped for, a number of White-headed Ducks.  A Penduline Tit was heard by a few and seen by one member; the rest of us content with more Goldfinches and Lapwings.  But all the time, the ever-present Ospreys and Western Marsh Harriers circling around.  One little extra; just to make a change from the birds we all had a very close-up with a rather large Mediterranean Chameleon Chamaelon chamaeleon which Steve had found in a nearby bush.  Lots of photographs taken so there may even be full body shots out there waiting to be published! 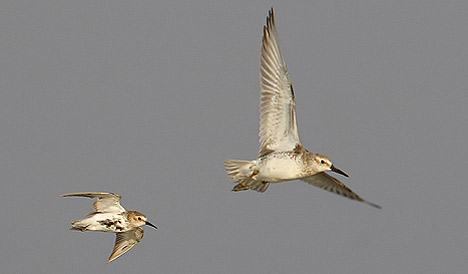 Our final stop took us back to the pools where we had seen all the waders just before lunch.  Whilst many of the birds had moved on, we soon found more at a neighbouring pan.  Much the same as before until we found a Redshank, Common Greenshank and Whimbrel together; great for comparing sizes, etc.  At this point, a male Hen Harrier, having completed his slow flight along the top of the fence bordering the road, decided it was time to cross the track.  Never mind close, if Stephen Fletcher had left his back doors open the bird could have easily flown straight through!  For most of us, it was as if the bird was too close to even get into the camera’s view finder.  But for me, watching a Sardinian Warbler feeding on the bank is one thing but when the bird is suddenly replace by a Dartford Warbler then things can only get better.  We even managed to find the missing Little Ringed Plover in a mixed plover flock and a group of a dozen Bar-tailed Godwits feeding in front of us.

But, eventually, for most of us, all good things must come to an end and it was time to work our way back to Jerez, collect our respective cars and start the long journey home.  But, all was not finished.  No sooner had Mick and I got on to the new motorway south towards Los Barrios than we had another Carrion Crow and then, about half way, a quartet of Griffon Vultures passing overhead followed by a Jay near the reservoir at Medina.  Finally, approaching Los Barrios, most of the stork nests seemed to have a pair of White Storks in residence.
Excellent birding with a final tally of 88 species seen during the day by the combined group.