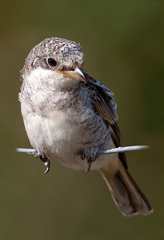 The first field visit of the Autumn by the Andalucia Bird Society saw 22 members attending a very worthwhile and enjoyable morning at the Guadalhorce in Malaga.  Meeting at the mouth of the western arm of the river, we even had a lone Honey Buzzard drift over westwards in addition to at least fifty plus Monk Parakeets as we gathered to walk along the beach, up to the Sea Watch and then via the Rio Viejo, Laguna Casillas, Laguna Escondida to finally finish at the large hide overlooking the Laguna Grande.  Was it worth it?  The answer must be “Yes” with Barrie and Jan travelling down all the way from Murcia, but is that further than Janet Dixon and Ceri and Jackie Levi, from Lancashire and London respectively, who had timed their breaks in Andalucia to coincide with the Society’s field trip?  The weather was perfect and all the birders were keen and enthusiastic and, although the water levels are getting desperately low and much in need of rain, between us we managed to record 57 species.

House Martin was seen as we left the buildings behind and on reaching the beach we had a good view of a Common Sandpiper and the first of many Mediterranean and Audouin’s Gulls.  A party of seven Kentish Plovers were feeding near the blocked mouth of the western river and then a group of three Sanderlings chasing the water’s edge.  On the coastal fence a Northern Wheatear and then a lone Sandwich Tern drifted west along the shoreline.  Looking inland from the Sea Watch we had sightings of both Crested Lark and Greenfinch and a short sight of a lone Western Marsh Harrier towards the back of the Laguna Grande. 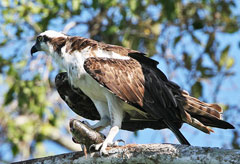 As we walked inland toward the Wader Pool we had yet another view of the solitary Osprey (still eating his fish breakfast), whilst on the old river’s banks were a good number of Little Ringed Plovers (mainly juveniles), Ringed Plover and a trio of Black-winged Stilts. At least one Wood Sandpiper and an immature Redshank which caused a little excitement for a few minutes as thoughts of “Lesser Yellowlegs” sprang to mind.  Naturally, plenty of Spotless Starlings to be seen, indeed at one point they looked as if they were waiting for scraps from the Osprey’s proverbial table, but the call of a Cetti’s Warbler and sightings of both Sardinian Warbler and Stonechat soon brought out attention back to the river bank.  And just as well as we were able to pick up a single Little Stint and Curlew Sandpiper on the far bank. 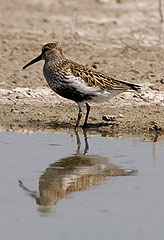 Reaching the Wader Pool, with some having seen the single Hoopoe and a Wren, we discovered the amount of water that had been lost in the previous week; resulting in very few birds.  A handful of Little Egrets, a pair of Little Grebes, passing Goldfinches and a Iberian Wagtail plus a single Common Greenshank at the far end seen only by the early arrivals were the main attractions. Laguna Casillas was equally devoid of birds albeit more water available.  Common Coots and Pochards were the main attraction here with a couple of Grey Herons. Our walk around the reserve was punctuated by several sightings of Zitting Cisticola.

So on to the Laguna Escondida which very often lives up to its name of the “Secret Pool!”  This morning was no exception, for having noted just a handful of Eurasian Coots and a similar number of White-headed Ducks some small disturbance at the back right of the water resulted in an influx of birds from “round the corner”; first a pair of Gadwall quickly followed by a single Shoveler and a few Mallards.  Yet more Coot, a couple of Moorhen, a handful of Little Grebes and three Little Egrets who seemed to have dropped in to see what all the fuss was about.  The great shame was that most of the party had already departed so not only missed this little addition to the numbers but also the Common Kingfisher that made a couple of flashing appearances as it first flew across the back of the pool and then right in front of the hide. 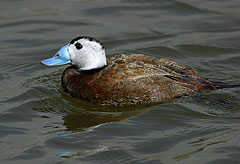 Arriving at the Laguna Grande we were greeted by hundreds of gulls all ready for identification.  But, again, the first arrivals had also picked up the Black-tailed Godwit which then departed over the back of the water to whence we had just come!  Most of the gulls seemed to be of the Black-headed variety but there were also good numbers of Mediterranean and a few Yellow-legged Gulls.  More searching revealed a couple, at least, of Lesser Black-backed Gulls but then, the pick of the bunch, a single Caspian Tern, with its huge orange-coloured mouth, showing signs of heavy head moult.  Resting, then flying round the pool before returning to its multi-gull company, somebody, hopefully, will have manage to get a great shot of the bird.  Also present to the left, a single Avocet and then, low and behold, a pair of juvenile Greater Flamingo put in an appearance on the far side.  All was not done, though, for by now most had seen the single Whimbrel to the left of the hide and, probably, the same individual recorded a week ago, plus a late-discovered Black-necked Grebe.  In the distance, we had a handful of Swallows and so the morning ended with members returning to their various corners of the Andalucia.

Birds recorded on the day, 57 species (Shown in sustematic order) 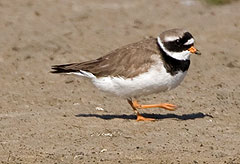