My mental picture of a Spanish landscape has to include a Corn Bunting on a wire, pouring out his jangling song

There are a lot of great things about earning a living working for Bird Watching magazine, but none better than the opportunity it creates to travel to some of the world’s best birding locations.
You don’t need me to tell you that Spain is very high on any list of such places, not least because it boasts all manner of extraordinary species that British birders can only dream about.
Take my first visit as a birdwatcher. In Aragon, close to Belchite, we peered between tussocks to glimpse the elusive, elegant Dupont’s Lark, in the midst of a landscape that wouldn’t have been out of place in a John Wayne western. A stop at an old quarry brought Black Wheatear and Black-eared Wheatear, both smart variations on one of my favorite species, that fearless globetrotter the Northern Wheatear.
The following day further north, we gazed at a Lammergeier (a bird I’d wanted to see since I was seven years old) gliding right across the horizon without once seeming to move a feather, watched glorious Blue Rock Thrushes perched photogenically on medieval castles, and finished up in the hilltop village of Alquézar. I was waking at times during the night to the sound of more Nightingales that were so loud I was at times convinced that one had found its way into my room. It was easy to understand where they get their Spanish name, Ruiseñor, ‘the noisy man’.
Next morning, Griffon Vultures and Egyptian Vultures were so numerous that we lost count after the first hour.
Next time I was in Spain, it was to discover the wide open spaces of Extremadura. In Monfragüe, raptors were the highlights, from the Cinereous (Black) Vultures soaring out of the mist just after dawn, to the Eagle Owl watching us from his hillside hunting perch in the gathering dusk. Add the Lesser Kestrels nesting in the bullring at Trujillo, and I could have gone home happy at that point.
But there was much more. Another early, misty start the next day had us peering into what looked like an empty field dotted with clumps of grass, weeds and small bushes. Except, as the day lightened, dozens of the clumps were revealed to be Stone-curlews, eventually stirring from sleep to dart after their food. But they were just the starters.
The rest of the trip brought close-up views of Great Spotted Cuckoos, huge flocks of Common Cranes, White Storks everywhere (and the odd Black Stork too, just for variety), and of course, the Great Bustards. Nothing can quite prepare you for the sight of a squadron of such bulky birds winging their way overhead, but once you’ve seen it, it sticks in the memory.
I haven’t even mentioned the Bee-eaters and Hoopoes that add great splashes of colour to any birdwatching trip to Spain. They’re great birds when they turn up as vagrants in the UK, with their beauty magnified by their sheer difference from our native species, but they’re even better under blazing Spanish sun, when their plumage positively ignites.
But great as every one of these encounters has been, there’s one that sticks in the memory more than any other, and it involves a dull, brown and seemingly unremarkable bird.
We were watching Cranes in former rice fields in Extremadura, when a Merlin appeared from the left, dashing low above the ground in search of prey. Suddenly, that prey was visible, a Corn Bunting, fleeing towards a little group of trees.
The raptor caught up with it and made a grab, but at the last second the Corn Bunting showed surprising agility to evade its grasp. So the Merlin tried again, and again, and each time this chunky passerine (so plump, in fact, that it’s known in Scotland as ‘The Fat Bird of the Barley’) produced aerobatics that enabled it to survive. Finally, no doubt with a sigh of relief, it dropped into the heart of a bush, and the Merlin turned its attention elsewhere. I felt like clapping.
So, why so excited over this one bird? Well, that Corn Bunting was one of thousands I’ve seen in Spain. Indeed, my mental picture of a Spanish landscape has to include a Corn Bunting on a telegraph wire, pouring out his jangling song. Dull as they look, they give me as much pleasure as any other species, so its survival felt like proof of its robust health here. 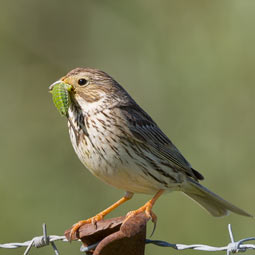 In my mental picture of the UK landscape, though, the Corn Bunting is sadly absent, despite the fact that 50 years or so ago it would have been every bit as familiar. And that’s because, while we have superb reserves, we’ve paid too little attention to what’s in-between. Or rather, too much attention. Every roadside verge, every bit of waste ground, seems to be a candidate for a ‘tidy up’ project. And although that might look a bit neater, it’s squeezing out birds like that Bunting, as well as Turtle Doves, Sky Larks, and more.
That Bunting, then, is a symbol of what, for me, really makes Spain great for birdwatching. It’s evidence of a landscape that still has room for the marginal, specialist species that are fast disappearing elsewhere. Long may that continue, but be prepared to fight to make it happen.

Matt Merritt is the editor of Bird Watching Magazine (www.birdwatching.co.uk), and a published poet whose latest collection is The Elephant Tests (Nine Arches Press).
He blogs at http://polyolbion.blogspot.co.uk/