A tale that knows no boundaries

A bird shall know neither bounds nor confines of man, remaining a free spirit to brighten our lives, a symbol of peace, fostering friendships for those who share in their joy. Peter Jones

We seem to be forever hearing of conflicts throughout our world with doom mongers peddling their political wares and none expected to sit on the fence without making allegiances. I guess we all have opinions on the world’s woes and I have uncertainties of how we can best meet the challenges posed for peace where conflict appears to have no solution. And so it all seemed to me on a recent birding tour in Israel. It was an interesting foray into an area rife with conflict according to and if you believe all media reports. Here birds from three bio-regions converge to reside, migrate or winter, demonstrating a blissful ignorance of political boundaries. Is there any hope peoples of the region can learn from these wonders of nature and each respect the right to their own and their neighbour’s existence? I’m a great believer that there is always hope, so witnessing the close cooperation between Israel and some of its neighbours with the monitoring of birds in the region, I came away with some very positive feelings.

Birders, just like birds, tend to go a wandering no matter the political climate, whether they are made of sterner stuff, self-indulgent or just plain crazy who’s to say? When I was invited to attend the week’s activities promised by the Hula Valley Bird Festival, it must have taken me all of 10 seconds to say yes. The chance to revisit Israel, after an absence of over 25 years, was hard to resist and the lure of such an array of birdlife was impossible to ignore. Did I have any problems? Well yes I did. My tour began with the sound of ‘fools rush in where wise suitcases never go’ ringing in my ears. Good old Iberia Airlines decided it was too much to expect for my suitcase to accompany me on my long journey, so they simply didn’t load it on the plane! After 3 days wear several items of clothing were beginning to protest and I had to weigh down my socks to stop them doing their own tour of Israel. When eventually my suitcase caught up with me I felt strangely grateful, even forgiving towards Iberia Airlines, quite why I’m not sure, it seems perverse on reflection. 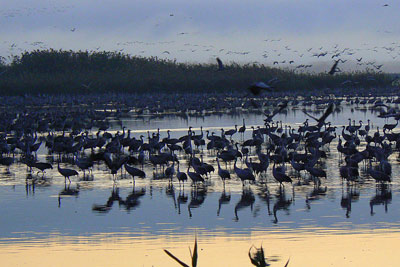 My week’s birding began by joining, what was to become, a tight knit group of avid and likeminded nature nuts. Good humour, shared moments, serious discussion and a bonding that grew with each passing day made for a memorable week. Our first day entailed of cranes and yet more cranes as we left very early morning to catch sight of some 30,000 cranes departing from their night time roost at first light. Wow, what an experience and pure spectacle, such beautiful birds creating a scene I will never forget and the deafening calls of so many individuals just added to the amazing atmosphere. Have you ever experienced a personal and almost spiritual moment, when the hairs on your neck stand-up and you are touched by some unseen force sending such a sense of wonder and well being through your body? Well, this was my moment and as humbling as it was spectacular. Of course the Agamon Hula Park and Hula Nature Reserve host an impressive number of wintering and migrant birds during late autumn, but my memory of the first day will forever be dominated by the grace and splendour of 30,000 cranes. 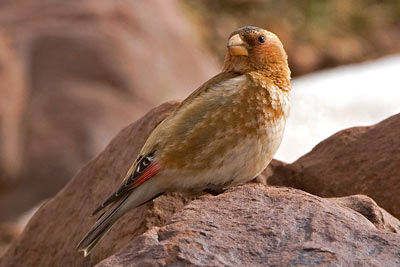 Our group had an extensive programme for 6 days and apart from being based in the area of the Hula Valley, we visited other prime birding locations. The second day was spent in the scenically impressive region of the Golan Heights, where snow covered mountain glistened in contrast to green valleys and painted wonderful vistas against clear blue skies. Birding on our journey to the first port of call Mount Hermon, we soon proved the worth of that age old birding adage of more eyes more birds! Having been a bit of a globe trotter and birder for some fifty years plus, it gets harder to find new species, not that I am any kind of lister harrumph, and one of the first birds sighted was Sombre Tit, a great little bird and one which has eluded me on so many other occasions, so Peter was one very happy bunny. The next trek up to the top of the Golan Heights was breathtaking, quite literally, as we huffed and puffed our way to the high ridge, where a few of us got onto a small group of Crimson-winged Finch, but apart from Woodlark, Fieldfare, Brambling and Northern Wheatear nothing much was doing at the top, mind you we did find a laden apple tree, which I have to tell you harvested one of the best apples I have ever tasted. A very major highlight to the day was seeing a couple of wolf on our descent, a privilege and wonderful sighting. 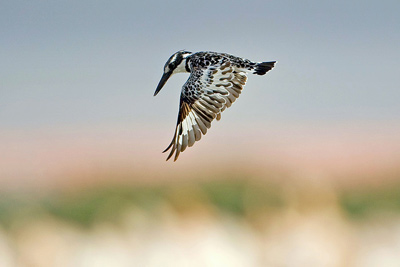 The third day of my visit saw us head to the seaside on the Carmel Coast and Ma’agan Michael. The area had lush golden sand beaches, calm waters of the Mediterranean lapping its shore, whilst sand dunes separated large manmade fish lagoons from the sea. The mix of fresh water lagoons and the seashore produced a wide variety of bird species and also Egyptian Mongoose were common. Gull species were wheeling overhead in very large numbers, Slender-billed Gull were plentiful with Armenian and Black-headed Gull making-up the bulk of flocks overhead. We did manage Mediterranean and Caspian Gull with waders also present in good numbers. As with the Hula Valley, the 3 kingfisher species presented an added reminder of the strategic position of Israel in terms of birdlife, acting as a bridge for three bioregions; Africa, Asia and Europe. Here you could watch the common Pied Kingfisher hovering over the still and fresh water of the lagoons reminding you of Africa, whilst the Asian White-throated Kingfisher would dash across your path in a blaze of colours as it searched for invertebrates, amphibians as well as a fish meal. Europe’s representative, not to be outdone, could be seen darting from one perch to another, it’s blue mantle vivid in the bright sunlight and showing well in all its glory perching often close to our group. The European Kingfisher is the only winter visitor of the three species with the others breeding here. 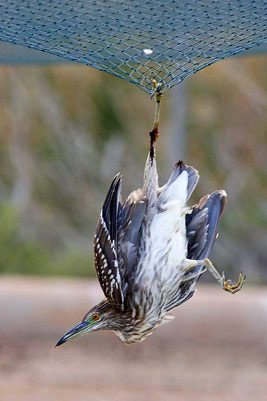 Day four and we were off to the Bet Shean Valley via the Sea of Galilee, and as an aside we saw lots of signs warning ‘Swimming not permitted’ although, presumably, it was okay to walk on it? We explored areas around Kfar Rupin and Tirat Zvi with some veritable successes which included 2 lifers for your man here, Dead Sea Sparrow and Pallas’s Gull, superb!! In fact the fish ponds that we visited were incredible for their variety of birds, especially gull species that included Armenian, Baltic, Pallas’s, Caspian and Heuglin’s Gull. In the surrounding area other birds to capture our attention were Desert Finch together with other large flocks of seed eaters. On a sad note, it was distressing to witness various heron species snagged in netting used to cover fish lagoons, although the same netting mesh size was also used at the fish farms in Ma’agan Michael, they at least had patrols to release trapped birds. It was appalling to see on immature Black-crowned Night Heron ensnared by its tarsus and foot whilst still alive, too far for us to reach; we could only look-on as it faced a long and tormented death. 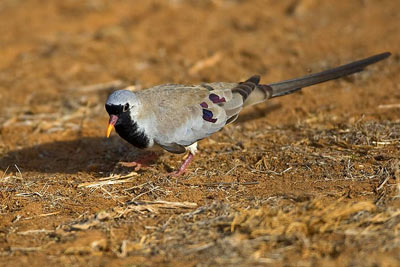 A dilemma, should I attend the conference and lectures being held over the next two days, or should I go a birding. Seems clear enough given the last few days, birding! Actually that’s a little unkind on those speakers at the conference. I would especially have liked to sit-in on Keith Bildstein’s lecture dealing with the geography of raptor migration, a global perspective, but decisions made I accompanied my group, the class of 2011, out into the field. In truth, anyone who knows me will also know I have a deep interest in wheatears, I could not resist the day’s mission of finding Finsch’s Wheatear. In every way this tour was exceeding my expectations, the variety of habitats, the number of bird species and the expert guidance of Jonathan Megrav was proving to be an unbeatable combination, but no Finsch’s Wheatear! We searched the likely and well known Valley of Tears, a terrain of grazed grasslands amidst a rock strewn landscape, looked perfect for my wheatears and yet not a sign, although we managed several other bird species. And so we made our way to the scenic outpost of the Unit 77 memorial site, group photographs, some snacks and at last a Finsch’s Wheatear, in fact 2 males and 2 females! Satiated we made our way to Agmon Park to see our friends the cranes and as a bonus we found a male Namaqua Dove. Another great day in Israel.

After just a smidgeon of self-indulgence during the previous day’s activities, I made the conscious and fortuitous decision to attend some of the lectures on offer for my final day at the festival. It was fortuitous because of the quality of both speakers and subjects available. Just some of the choice lectures included conserving birds and their habitats by Ariel Brunner (Birdlife Europe), tourism and conservation linkage by an old friend Tim Appleton, environmental education program in Palestine by Imad Atrash and so the list went on, informative up to the minute briefs on what’s happening in our natural world from top line experts. The lectures were followed by a group discussion where we could all chip-in and get to talk to various leaders and decision makers, a down point was going for lunch on a last visit to the Haelot Reserve in the upper Galilee and thus arriving too late to listen in on Pete Dunne’s talk on monetary rewards and conservation payback of birding tourism, another day I hope Pete! For me the whole week had been so worthwhile, rewarding and at all times a great pleasure. If you have not visited Israel or considered it as a destination for birding, then I can only say you are missing out, it has top species and pure spectacle to offer, I thoroughly recommend it.

Understand that life should be a source of experience to be lived up to, not survived through. 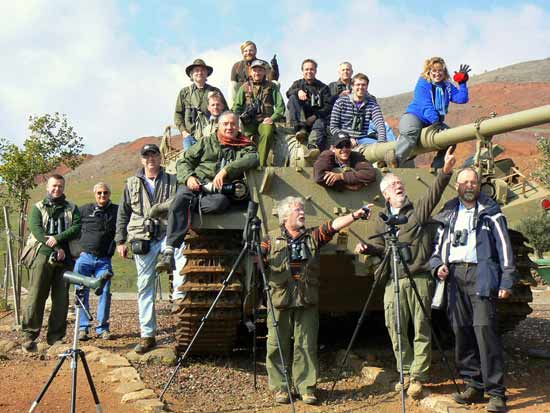