Portrait of a Wilderness

In the Spring 2013 edition (Volume Two, Issue Two) of Birds of Andalucía, a small panel on P15, headed ‘Did You Know?’, pointed out the fact that there is no obvious physical recognition anywhere of the pivotal role played by the English naturalist Guy Mountfort in saving the Coto Doñana back in the 1960s. 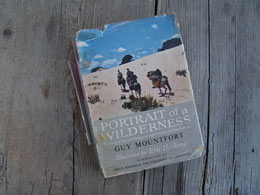 It was a timely reminder that, but for the efforts of Guy Mountfort and a few other key players such as Don Manuel González Gordon and his son Don Mauricio González Díez, the Doñana might easily have been destroyed by development at a time when few people even knew of its existence. What the short piece in Birds of Andalucia  did not mention, no doubt through lack of space, was something that brought the wonders of the Coto Doñana to a significant audience, the book Portrait of a Wilderness, published in 1958 and written by Mountfort himself.

Portrait of a Wilderness, to quote from the inside flap of the dustcover: ‘is an account of the work and adventures of three scientific expeditions to the fabulous Coto Doñana in the wilds of southern Spain, which took place in 1952, 1956 and 1957.’ It goes on to add: ‘The region was for 350 years the hunting reserve of the Dukes of Medina Sidonia and has remained completely isolated and unspoilt. It is today the most important wildlife refuge in Europe’. The book in its original form is a hefty hardback of some 240 pages, lavishly illustrated with photos, nearly all in black-and-white, taken mostly by the legendary Eric Hosking who was at the time Britain’s leading bird photographer.

I am aware of the book because my father bought it for me, way back, as a Christmas present. Assuming this happened in the year of publication I would have been just eight, rather young for such a book, so I’ve always suspected there might have been an ulterior motive; not that I mind that. My dad’s no longer with us so it’s too late to ask him about that now and anyway he had already enthused me with his interest in birds. The book was then on his shelves for decades until I reclaimed it and re-read it a few years ago, having by then been to the Doñana myself. Sadly, my father never even visited Spain, much less the scrub, open woodlands and wetlands of the Parque Nacional de Doñana. He would have loved it, despite the quirky belief he seemed to have, which strengthened as he got older but was usually unspoken, that somehow birds outside the UK were not quite as valid as those seen in the UK.

Mountfort, an advertising executive in his day job, was already a well-known ornithologist when he led the expeditions of the 1950s. He was the author of A Field Guide to the Birds of Britain and Europe (Collins, 1954), illustrated by Roger Tory Peterson and with distribution maps by Philip Hollom, both of whom were on the Doñana expeditions. Subsequently, in 1961, Mountfort was one of the founders of the World Wildlife Fund, now the World Wide Fund for Nature. In 1970 he was awarded the OBE for services to ornithology.

He also wrote Portrait of a River about the Danube Delta and Portrait of a Desert about Azraq in Jordan. Interviewed at the age of 94 in 2000, he was “surprised and gratified” when he was told that his Portrait series was among the most frequently cited in a ‘best bird books’ debate on the UK Birdnet internet mailing list.

Doñana is no longer quite the wilderness it was 60 years ago but Portrait of a Wilderness remains both a glimpse into a strangely distant, privileged world and a memorable tribute to the Doñana itself. Guy Mountfort died in 2003 but his wonderful book is still available. If you go onto www.abebooks.co.uk and put in the author and title, you will find many copies available from specialist booksellers. Prices start at about £12; add in postage from the UK to Spain and you are talking around £20 for the total cost. This seems to me a very good deal for such a classic volume, especially given the relatively high price of even run-of-the-mill modern books if bought in Spain.

And meanwhile, to go back to the catalyst for my article, what can the Andalucía Bird Society and its members do to push for a permanent memorial to Doñana’s early champion, Guy Mountfort?