“The following article is written by two of our Spanish colleagues and ABS Members, who are actively involved in the conservation of this wonderful and important place. With the assistance and experience of our Patron, Tim Appleton, we at the Andalucía Bird Society are committed to participate in the restoration of La Janda and to offer, political, financial and scientific support to the objectives as set out below. Furthermore, we wish to place on record our gratitude and respect for the invaluable work already undertaken by this team and to all at the Association of The Friends of La Janda. At the end of this piece, you will find two links that allow you to sign the ‘pact for La Janda’ and this is an excellent opportunity to help us raise awareness and to show the relevant authorities that public opinion is changing.”  Neil A Hill Conservation Director ABS

La Janda is one of the most important bird watching hotspots in Andalusia and indeed in the Iberian Peninsula. This is the result of its strategic geographical location in the Strait of Gibraltar and the rich mosaic of natural and semi-natural (farmed) habitats which includes seasonally flooded rice paddies.

Numerous sources attest to the conservation status of the avian community and the resulting interest for the birdwatcher. However, this is just a mere glimpse of its former splendour. Well into the second half of the twentieth century, La Janda used to hold the largest seasonal lagoon in the Iberia and was one of the most important wetlands on the European continent.

The depression was created by tectonic forces which resulted in an extensive flood plain, fed by the Barbate river and its tributaries. This way, during the period of maximum flooding, La Janda expanded to over 50km2. During the dry part of the year, its surface shrank to approximately 4000 hectares and formed a part of a wider network with seven adjacent smaller lagoons, namely: Rehuelga, Espartinas, Cabrahigos, Alcalá, Jandilla, El Torero, Tapatanilla y Tapatana-La Haba.

In general terms, the wetland systems of La Janda comprised permanent and temporary endorheic (water bodies with little or no outflow) lagoons with swallow waters which, to a large extent, were covered by extensive reedbeds. No doubt it was a world class avian haven! 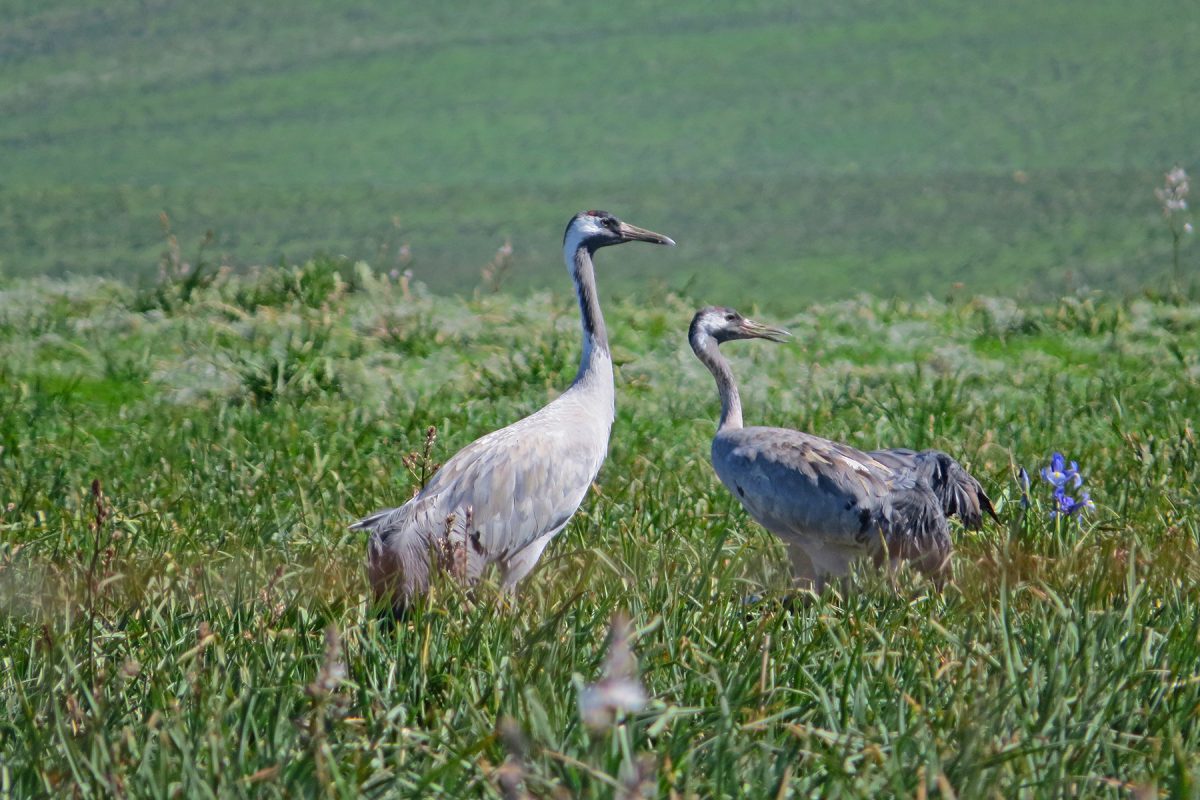 The richness of the avian community in the former lagoon had caught the attention of the human inhabitants of the region from time immemorial. This is manifest, for instance, by the birds depicted in the rock art at the nearby Archaeological site of “Tajo de las Figuras”. Indeed, this has been considered an “early practice of bird watching” at La Janda dating from the Neolithic period! (Lazarich et al. 2019)

More recently, during the 19th and 20th centuries, the unparalleled richness of the avian community in the wetland, drew the attention of wildfowl hunters and European naturalists. Among them, the following British authors deserve special mention: Irby, Verner, Buck and Chapman, and Riddell. All of them comprehensively described the ornithological value of La Janda in their respective reference works. We encourage you to read these authors to get a better insight on the former splendour of La Janda and its birdlife.

More recently, Professor Francisco Bernis, pioneer of modern Spanish Ornithology, still witnessed the importance of the wetland. He recorded, for instance, the last breeding pairs of Common Crane in La Janda and the Iberian Peninsula in 1954. Equally noteworthy is that the edges of the Lagoon held the last known population of the Andalusian Hemipode in Spain.

Tragically, nothing could prevent the wetland from being drained.

From the end of the Islamic period, La Janda was held in Royal Ownership. Next, in 1307, King Fernando IV gave the Village of Vejer, including La Janda, to “Guzman el Bueno”, thereby acquiring Ducal jurisdiction. This created a constant source of conflicts with the inhabitants of Vejer claiming their rights over the land. In 1566, the “Real Chancilleria de Granada”, settled the case by giving the neighbours of Vejer the ownership of La Janda.

In 1822, the Spanish Government ignored the communal ownership of the land and mandated the drainage of the wetland. This way, in 1830 the first attempts to drain the lagoon were carried out.

However, these proved unsuccessful. The drainage channel built for the purpose soon became clogged and the wetland survived. Since the mid-19th century, the idea that wetlands were unproductive land and potential sources of disease strengthened in Spain. This concern led to the passing of the devastating Cambó Law in 1918, which gave legal backing to the already strong trend of wetland drainage. In this context, the Franco years arrived including a large array of development projects of immense negative environmental impact. Unfortunately, the drainage of La Janda, along with other foremost wetlands such as La Nava in Palencia and Antela in Galicia were among them.

In 1946, the Spanish Head of State appointed the company “Colonias Agricolas S.A.” for a new project to drain La Janda. Given the administrative drawbacks, they didn’t manage to complete the task within the deadline. Therefore, in 1954, following a Ministerial Order, “Colonias Agricolas SA” was forced to transfer the ownership to “Lagunas de Barbate SA”. In 1964, the later company undertook a new attempt to drain the lagoon. At this time, it was stated that a significant part of the drained terrain, 8474Has, would be considered State Property. This situation was ratified as per the Spanish Supreme Court judgement in 1967.

Unfortunately, the prolonged inactivity of the relevant authorities, could not prevent the drained domain from being intensively managed as private agricultural land in hands of a few major landowners. The judgement of 1967 was never enforced and the public domain was never recovered.

This way, the natural wetland disappeared during the late 60s of the last Century and a confused administrative situation has remained until today.

Nowadays, the nearby reservoir of Almodóvar (east of Facinas) along with a large outflow channel regulate the flow of water into the basin. However, during periods of exceptional rainfall, La Janda re-floods repeatedly for a short period of time. 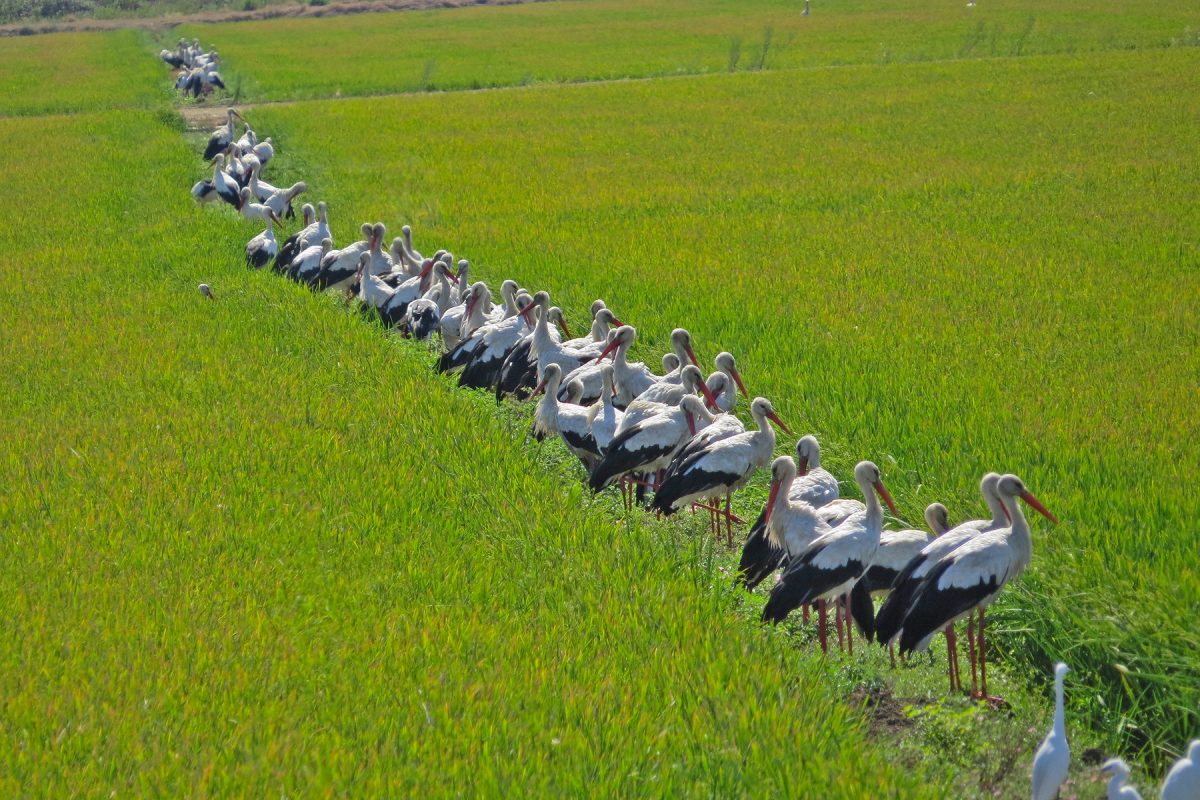 The NGO was created in 1994 on the initiative of Paz Lerma and Cristina Parkes, who were privileged to witness the uniqueness of La Janda as one of the most important wetlands in Europe during their childhood. Cristina is nowadays the Honorary President.

The main goal of the Association is the restoration of a representative part of the former wetland based upon ecological criteria. This includes the conservation of its flora, fauna and natural processes and its declaration as a protected wildlife site.

During its 25 years of existence, Amigos de La Laguna de La Janda has promoted a number of campaigns to keep alive the memory of the wetland and to highlight the interest of its recovery. To achieve this, with a special focus on the local population, the organization participates and promotes: bird surveys, workshops, exhibitions, protests, articles, etc. In addition to this, the Association raises awareness by means of social media and a dedicated website and blog, which can be accessed here. 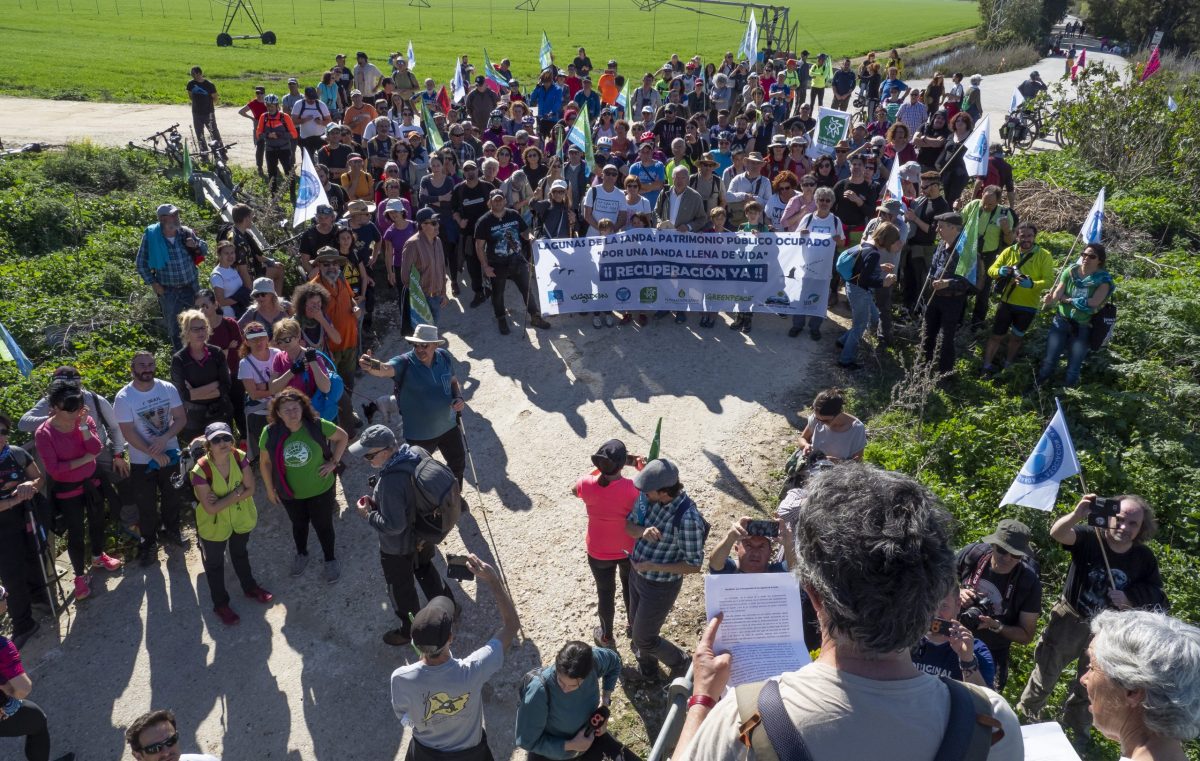 After many years of dealing unsuccessfully with the Andalusian Government, the Association sought support from the foremost national conservation organizations. Today, Ecologistas en Acción, SEO/Birdlife, WWF, Greenpeace, Nueva Culture del Agua, Ríos Con Vida, and Fundación Savia, to name but a few, work shoulder to shoulder with the Association. At this point, the central target is to persuade the Spanish and Andalusian Governments, to regain ownership over unlawfully occupied land that totals nearly 9000Ha.

Only when (and if) this is achieved, will come the time to think and move towards the ecological restoration of the former lagoon.

A significant achievement of the Association has been that, over the last couple of years, the municipalities of Barbate, Conil, Medina Sidonia and Tarifa, have officially asked the  regional and national governments to restore La Janda.

More significantly, in June 2019, Teresa Rivera, head of the Spanish Ministry of Environment, officially expressed her commitment to work towards the restoration of La Janda. At present, the ministry is working to disentangle the conflict of land ownership and to decide what is public and what is private.

The Association, with the support of the previously mentioned organization, is keeping a close eye on this process to ensure that it continues.

Despite the encouraging achievements, Amigos de La Laguna Association is acutely aware that the final goal is still remote, though not impossibly so. We are aware that the interests of the unsustainable agri-businesses are still powerful enough to block the process towards an open access wetland of true ecological richness and importance.

This is where we need your help, you can join us and become a friend of the Lagoon of La Janda and you can also sign the petition in support of our objectives, both of these can be found on the website here and the pact of La Janda can be signed here.

Together with the members of the Andalucía Bird Society we can take another step forward in realising our goals and re-establishing one of the most important nature conservation areas in Europe.