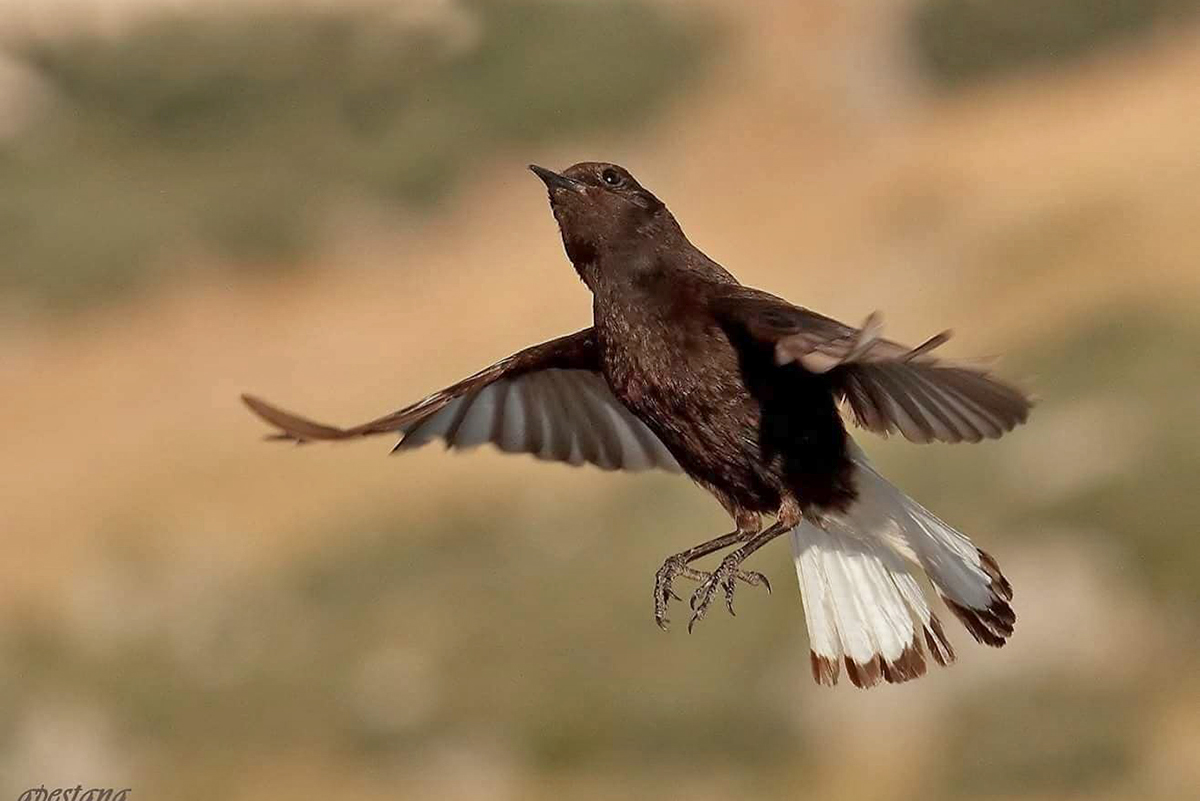 “Wheatear a folk etymology of white and arse, or more simply put ‘white arse’, never was this more appropriate than for this LBJ (Little Black Job) the Black Wheatear, where the white arse is among the most prominent within the family of wheatears”. Peter Jones

A dull plain bird, almost unicolour black apart from a white rump, vent and white on the tail, I wonder is this how people think of Black Wheatear (Oenanthe leucura), the plain Jane of the wheatear family? Visitors to my area, La Serranía de Ronda in Andalucía, rank this bird as one of their most want to see birds, I guess not surprising given its restricted range where it is confined to the Iberian Peninsula, SW France (now very rare) and Northwest Africa. So not just an avid bird lister’s target bird, but there are actually also bird watchers who just want to see and observe this unusual wheatear, which is comforting to this self confessed and obsessed wheatear nerd.

An unusual wheatear? Well yes, in many ways too. It is our only resident wheatear in Western Europe and whilst there is some evidence to suggest partial migration of northern birds, they are largely sedentary apart from altitudinal dispersal in cold winters. Whilst those familiar with the wheatear family are used to seeing birds in short, fast dashing flight, these birds are more likened to the flight of an overloaded bomber at take-off, their short wings in relation to their large and heavy bodies produce a whirring of wings rather than short strong flaps associated with other wheatears. It is a feature that adds to the fun of watching these superb birds. Other major differences is in lifelong pairing and some unique activity whilst nest building, both of these points I will come to later. 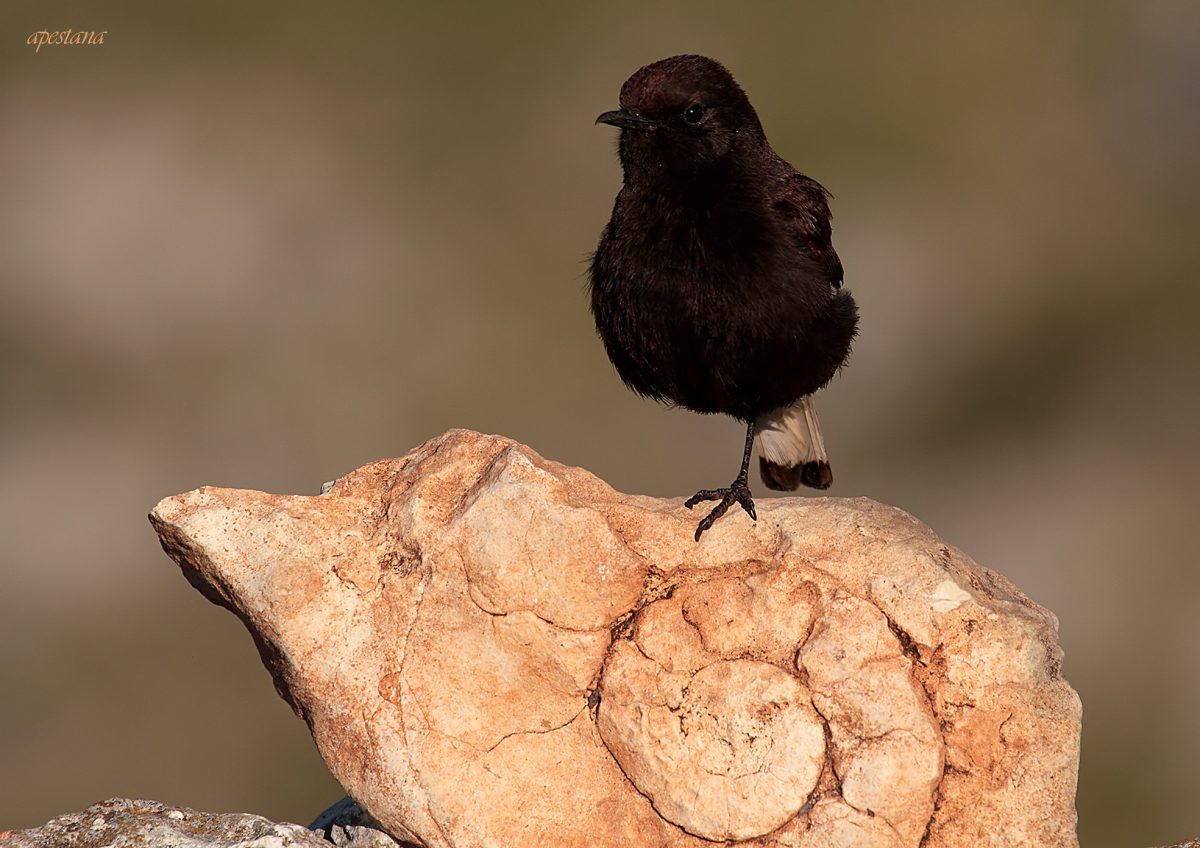 A pair of adults can hold a wide area as their own and although the territory can be extensive it is only really defended with any serious degree during the breeding season. In fact, in my study area, I found considerable overlap in neighbouring territories and holding pairs tended to be tolerant of each other and sometimes seen feeding in close proximity outside of the breeding season. Most other territorial disputes involve younger birds seeking to usurp the resident pair; this is met with the combined efforts of the resident male and female in the defence of their territory and this defence was always successful in my experience. Rivalry with conspecifics always becomes frenetic during the breeding season, surprising the observer after the apparent lack of interest by the territorial pair at all other times of the year. In my mountains the main species to bear the brunt of this aggression is Blue Rock Thrush Monticola solitarius, they are harried and chased from territories and sometimes well beyond, other species are also not tolerated during this period and these include Northern Wheatear Oenanthe oenanthe, Black-eared Wheatear O.hispanica, Rock Thrush M.saxatilis, Black Redstart Phoenicurus ochruros and to a lesser extent Stonechat Saxicola torquatus.

Being a resident bird and holding a territory all year round has several advantages. The pair is familiar with every rock and other vantage point as well as prime feeding areas, something essential for survival and successful breeding. Interestingly the feeding areas are visited on what appears to be a rotational basis as if to preserve food stocks, especially areas containing higher densities of insect life and larvae. One of the features to watching these birds was the time they spent doing very little, even when feeding broods of young, they are the absolute masters of finding food on demand, obviously something made possible by knowing the territory well. These birds are omnivores and during the autumn will actively eat fruits such as blackberry, ground elder and the locally common haws, plus other fruiting plants. Insect wise they can catch on the wing such things as butterfly, moth and other flying insects, but will also take mantis, crickets, beetles, scorpions and spiders. I have seen them take very small young frogs, but they have a taste too for small lizards, in fact one of the most amazing strategies I have witnessed is for them to attack much larger lizards than would be possible for them to kill and eat, yet they deliberately attack these reptiles waiting for the victim to drop it’s tail and hence a free meal! It is an amazing strategy shared by its rival the Blue Rock Thrush.

My birds appeared to pair for life and were constant companions during summer and winter, both active in defending their territory. Much of the evidence for this and a pair’s relationship with neighbouring pairs was made possible by fitting colour rings to each bird, making the identity of each individual through observation an easy task, although catching these smart birds was never easy. One of the interesting outcomes to this individual colour marking was to witness how pairs were socially monogamous, but sexually permissive. It wasn’t unusual to see either the female or the male indulge a little bit of hanky panky on the side!

Another unusual and fascinating aspect to watching these birds is to witness males demonstrating their strength and attraction to watching females. These males are the equivalent to our interior designers and decorators, they decorate nesting places with stone platforms, with individual stones weighing up to 28gms (2 thirds of their own body weight) and the older the male the more likely the heavier the stones will be, it appears these demonstrations of strength and art help to cement bonds between pairs and also advertises the superiority of some older males over potential rivals. The number of stones can vary dependent on how old a nest is, some use the same nest site each year and these are renewed annually, some with a few hundred and some with thousands, it is remarkable and another endearing feature to discovering the world of this species.

Breeding starts in my mountains at the beginning of March, with plenty of display and pair greeting leading up to this period. The male can be seen in flight display and regular song as early as January and February. It is an amusing time observing the meet and greet ceremony between the pair, a bowing and tail fanning as soon as one or the other alights near to the other. Nest building begins in early March; material being mostly carried to the nest by the male, where the female will often go after the male departs to maybe better organize the structure. Nearly all the nests I found were in crevices with the nest sometimes built upon carefully placed stones and always had the entrance decorated by many stones almost exclusively placed by the male, on one amusing encounter I saw a female taking a stone into the nest crevice shortly followed afterwards by the male, who promptly removed the stone placed by the female. Seems we are not alone in having differences of opinion on decor! The eggs are brooded almost exclusively by the female and the male frequently accompanies her when she leaves the nest to feed, she is also promptly chased back to the nest if feeding takes too long. Fledging normally takes around 15/16 days and the young are cared for after they leave the nest for a similar period. My local birds are double brooded; although I did have one instance during 2017 when I had a pair successfully raised 3 broods. I found most first clutches contained 5 eggs, but subsequent clutches were between 3 to 4 eggs. Young birds are normally tolerated in the territory until late autumn, sometimes through the winter, but are then dispersed by both parents.

I hope this brief account of the black beauty has given you a small insight into this species and why I am so fascinated by it, who knows it might even inspire you to venture out to find and spend time with this bird? Take it from me, a little time spent with these birds will more than reward you for your effort and patience. Andalucía is a particularly good region for seeing them and there are many well known sites you can visit to fill your boots with these lovelies, El Torcal, La Serranía de Ronda, Sierra de Grazalema, Sierra Nevada, Sierra Morena and so many more areas too many to name here.

For those with an interest not just to observe them at close quarters, but also to have the opportunity to take photographs, then I would recommend getting in touch with Antonio Pestana. Antonio is an official and approved wildlife guide with the Andalucía Bird Society and has a hide set-up specifically for this species. He can be contacted via Email here: ajpestana@hotmail.com or via his website here: www.antoniopestana.es

Locally common, especially where areas are arid in mountain regions up to 2000m. Up to 4,000 to 16,000 pairs estimated in the year 2000 for Europe.  I estimated between 400 and 450 pairs in the areas of Serranía de Ronda and Sierra de Grazalema.

World distribution. Scarce in France, Libya and Tunisia. Common to locally common Spain, Portugal, Morocco, Mauritania. Morocco is most probably the stronghold for this species. 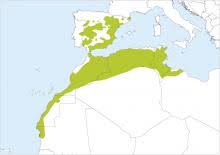 Colour ringing always involved just a single colour ring fitted to the opposite leg to the coded metal ring. Never more than one was fitted. Varying leg side and two-tone colour rings allowed endless combinations.

More questions than answers? It is normal to start a research project with a single question, in this case why was Black Wheatear decreasing? Of course what is also normal is one question soon becomes more than a 100, then it is almost like a process of elimination working backward through all these extra questions. During and after the main study period the local population was increasing.

One mystery arose from the trapping and ringing of this species. The average male wing length recorded during the study was 92 to 100mm with an average weight of 32 to 35g. I was totally thrown by catching a male during winter with a wing length of 112mm and a weight of 50g, and yes I not only double-checked, but triple checked both measurements and measuring equipment. Could this have been a northern bird having migrated south? Perhaps I will never know.