A question often asked of ornithologists is “How long do birds live?” There is no simple answer to the question as survival varies from species to species. An examination of the latest British Trust for Ornithology’s ringing report (Coiffait et al 2008) in which longevity figures were listed and the EURING web site (Fransson et al), revealed the following: 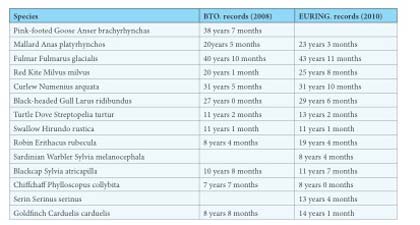 It is clear from the above that the trend is for larger birds to survive longer than the smaller ones. Obviously we have insufficient data to make any comparisons with most of the above, but we do however have sufficient, collected over a period of years, for some of the smaller passerines. Thus we are able to calculate minimum survival rates for the more common species to see how they compare with the longevity records.

Catching and ringing a bird is only the beginning. The age, sex, wing length and weight are all recorded. (Marchant J.H.et al. 2008)
Some we have ringed previously, “retraps”, and these are equally important, especially if the same site is worked over a period of years. Regular study inevitably results in a wealth of data for the same birds, which with the use of some basic statistics can be used to calculate the minimum survival rate of that species. No ringer will claim 100% trapping efficiency so the longer the study period, the greater the sample size and hence the accuracy.

The study here at Casares, Málaga province, began in November 2002 and with the help of members of Grupo Ornitologico del Estrecho, a local bird study group, is still continuing. All species vary in the numbers ringed and have their own particular points of interest. Here I deal with one of the most common, the Sardinian Warbler Sylvia melanocephala. No BTO longevity figures are available for this species as it is rarely recorded in the U.K. 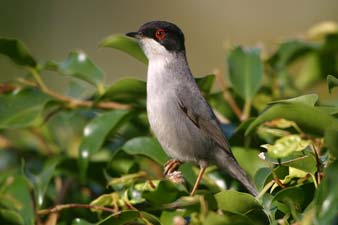 The Sardinian Warbler is a breeding “resident” but there is a distinct post breeding movement in June and July.
Most of the birds leave the study area in August until January. (Fig 1)

Birds ringed in the June-July period are a combination of those reared on the study area and others attracted primarily by the abundance of berries on the numerous Pistacio lentiscus bushes. Where they all go to in August onwards is a mystery as none have been recorded by other active ringers within a 50 kilometre radius. Many reappear from February onwards; together with some birds that are new to the area. Clearly it is not as residential as supposed as we had more than one sighting on St. Agnes Isles of Scilly in the spring during the years when we were resident there!
An examination of the data for all the Sardinian Warblers retrapped in the study area produced a sample of 342 individuals, many retrapped on more than one occasion. To determine minimum survival rate, the number of months from the date of ringing to that of the last time the bird was caught was tabulated and the totals for each monthly increment was plotted. As was to be expected, more birds were caught nearer to the date of ringing. (Fig 2) Looking at the results the graph would appear to be an exponential, so natural logarithms were used to test the point and improve the accuracy. (Fig 3) Clearly it is, and with a correlation coefficient of 0.994 gives a truer figure for the older birds. 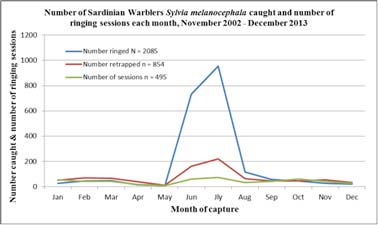 Figure 1. Number of Sardinian Warblers Sylvia melanocephala ringed and retrapped each month during the study period November 2002 – December 2013 together with the number of ringing sessions. 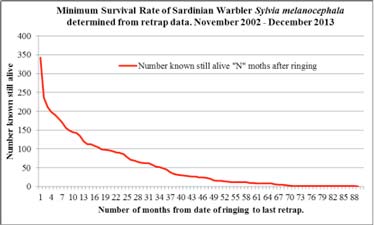 Figure 2. Number of birds known to be still alive “N” months after being ringed, 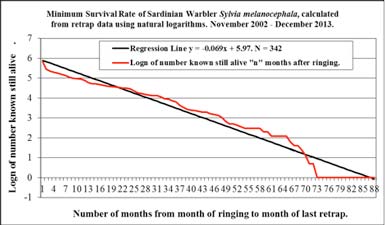 Figure 3. Number of birds known to be still alive “N” months after being ringed, together with the regression line for the whole sample using natural logarithms.

In spite of predation, both avian and mammalian together with the slaughter by “hunters” the species seems to be surviving. Long may it continue to do so!