I am sure we have all been shown collections of fuzzy photographs taken by amateur photographers.  The reasons for these blurred images could stem from a number of causes; the subject may have been moving and the shutter speed was too slow to freeze the movement.  This can easily be corrected by using an appropriate faster shutter speed.  Sometimes, however, the blurring caused by subject movement can be used deliberately to artistic effect to give the impression of movement.  Unclear images can also be caused by excessive camera shake, as we have seen the image stabilisation technology is a great help in this regard, but even this can be overwhelmed in certain circumstances.  The solution once again is to use a faster shutter speed; in lenses without image stabilisation the rule of thumb is to use a minimum shutter speed that is the reciprocal of the focal length ie. for a lens of focal length 200mm a shutter speed of  1/200 sec.  This of course does not apply if the camera is supported on a tripod or on a stable surface when slower shutter speeds can be used.  The final cause of blurred images is lack of accurate focusing.

Modern digital cameras have highly effective auto focus systems, but even these are not foolproof and we need to be aware of how they work and how they can be used most effectively.  The auto focus system is based on finding differences in contrast between the subject and the background, therefore if you try to focus on a green bird standing in front of a green bush there is almost certainly going to be insufficient contrast for the camera to focus.  This will be exemplified by the lens ‘hunting’ ie. focusing backwards and forwards trying to find the correct focus.  In such difficult circumstances it may be possible to switch off the auto focus and use manual focus particularly if the camera is supported.
Another important point to bear in mind is that you have some controls over the auto focus system of your camera.  On telephoto lenses it is possible to limit the focus range that the lens uses eg. if you know your subject is going to be more than 10 m distant the lens can be switched to ignore its close focusing range and to only search the distant range.  This makes focusing more rapid.  The other control that is often overlooked is the selection of centre-weighted focusing, which uses only the central area of the frame for focusing and ignores the background.  If the subject is a small stationary bird in the centre of the frame this is the best option to select.  Some cameras also allow the central focus area to be displaced laterally and vertically so that the subject does not need to be in the centre of the frame. If you select a larger auto focus area the camera will give the best overall focus for the image and the small bird in the picture will inevitably be out of focus.  A slightly different situation applies when flight shots of birds are attempted, here the subject is not stationary and centre-weighted focusing is almost impossible to use because the subject cannot be retained within the small focusing area.  Using a larger area works effectively here since a bird flying against a blue sky provides the only contrast object in the field and the lens is able to focus satisfactorily.  The final selection to be made on many cameras is the choice between single and continuous auto focus.  For a bird sitting still, single autofocus and single shutter exposures provide an opportunity to achieve a range of slightly different critical focus shots; for the flight shots continuous focus and continuous multiple exposures may be the best option.

IS MY IMAGE IN FOCUS?
We might imagine that the modern technology of cameras will always give acceptable, sharp, in focus images.  Unfortunately this is not true, particularly for wildlife photography.  One of the major problems is that the exact plane of focus is critical for a perfect photograph and generally if you take 10 shots of a bird sitting on a branch only one or two will be in the correct attitude with perfect focus.  What is perfect focus?  For a bird photograph unless the eye is sharply in focus the picture will always be unsatisfactory, the fact that other parts of the bird eg. the tail go out of focus will not detract too much from the image.  The main cause of the difficulty of getting perfect shots is the phenomenon of depth of field which we will now consider.

DEPTH OF FIELD
This is a complex subject but can be explained and illustrated quite simply.  Depth of field can be defined as the range of distance between the camera and the object which gives an image in acceptable focus.  For a given lens and camera system depth of field is dependent principally on the aperture used.  The wider open the aperture the smaller the depth of field and as the lens is stopped down the depth of field progressively becomes greater.  This effect can be clearly seen in the photographs below taken with a 105 mm Macro lens on a Full frame DSLR at f3, f8 and f18.  For comparison the fourth image is one taken with a compact camera with the aperture open (f3.2) and it is immediately obvious how much depth of field there is in this image.  How do we best use and manipulate depth of field to take good photographs?  At first sight we might believe the best option is simply to stop the lens right down and have the maximum depth of field.  The penalty for this is that closing the aperture reduces the light entering the camera eg. closing 2 stops reduces the light by 4x and 4 stops reduces it by 16x, to keep the exposure constant the shutter speed would therefore need to be reduced by the same factors.  As we have seen slow shutter speeds will give problems with camera shake and subject movement. 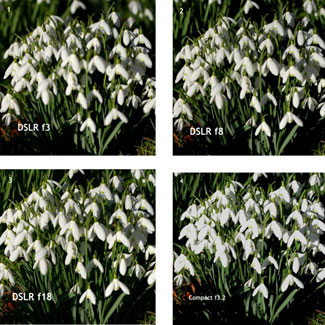 The reduction of light entering the camera can also be compensated for by increasing the ISO value ie. the sensitivity of the sensor (this is like using a faster film), but there are penalties associated with using high ISO settings which we will discuss in a future article.  The other issue to consider is that we may not always want maximum depth of field since a nice potrait of a bird with the background suitably blurred is often what we are aiming for.  Also stopping a lens down too far reduces the performance of the lens in terms of resolution.  How can we summarise the topic of depth of field?  Basically it is a balancing act, stopping the lens down to achieve sufficient depth of field to have the subject all in focus, without sacrificing so much shutter speed that the image is blurred by movement or having to use such a high ISO setting that the image becomes noisy.  The compact cameras, which have a very large intrinsic depth of field, have great advantages in some applications eg landscape photography, but this characteristic may not be ideal for some wildlife shots.  As we shall see in later articles images can be manipulated extensively in software packages like Photoshop and this includes deliberately blurring backgrounds, however, taking the best image initially should be the photographers aim.
One small final observation about depth of field.  Depth of field extends both infront of and behind the actual plane of focus, sometimes the photographer may wish to manipulate this in a different way.  Hyperfocal distance (the focus distance which places the furthest edge of a depth of field at infinity) allows you to do this.  With the camera set on manual focus and with a table (which can be downloaded from the web) the aperture setting for the lens can be used to calculate the focus point which will give acceptable focus throughout an image from the foreground to infinity.