This is the first of a projected series of articles aimed at providing background information and techniques to help novices and those with some experience to obtain high quality photographs of wildlife, birds and animals, as well as plants.  In this opening article we will deal with the camera equipment that is available and what might satisfy the requirements of different photographic aspirations.
Before we delve into the detail a few words of warning.
Photography can become addictive, just like birding, and the standard of photograph you achieve initially may not continue to satisfy as time goes on and, since individual aptitude and equipment both have an influence on results, an urge to upgrade equipment is a common symptom of the addiction.  The second warning is that the camera manufacturers are extremely smart and once you enter the world of cameras with interchangeable lenses and accessory equipment you encounter the brand specificity of fittings ie. you cannot use the lens or flash gun of one manufacturer on the camera of another.  Unless you are a professional photographer and replace all your equipment regularly you will be locked into one brand indefinitely, so make your initial choice carefully!

TYPES OF CAMERA
We will deal here only with digital cameras and only those most likely to be encountered by the amateur photographer.  At the present time many portable electronic devices include cameras, eg phones, tablets etc., these are capable of producing excellent images but have limited use in wildlife photography.  The simplest, and cheapest, dedicated cameras are the compacts without interchangeable lenses.  These often have a significant optical zoom capability on the lens and are small enough to carry at all times to capture elusive moments.  Inevitably they have drawbacks, principal of which is the relatively small area of the sensor.  The sensor is the recording device that has replaced the film of traditional cameras; it comprises a solid state device with individual pixels each of which records  an area of colour information which is converted to the digital signal forming the entire image.  If a sensor has few pixels the individual pixels will become visible as the image is expanded during processing for printing.  If the pixel count is increased to counter this each pixel has to be smaller and the resulting sensor suffers from greater electronic noise in the image (colour distortion) and the dynamic range is reduced, that is the ability of the sensor to record an image over a wide range of light intensities.  This is manifest in blown highlights and lack of detail in shadows.  The basic lesson to be learnt from this is to choose a compact camera with a larger rather than smaller sensor.  Recently the manufacturers of compact cameras have introduced versions with interchangeable lenses which makes them more similar to Digital Single Lens Reflex cameras (DSLR) without the penalty of weight and size.  The big difference between the compact camera and the DSLR is the means of framing the image you wish to take, if the compact has a viewfinder it is not the exact image seen through the lens and the main tool for framing the image is the screen on the back of the camera.  Seeing people with a camera held at arms length trying to frame a moving object is a common sight.  In the DSLR the image through the viewfinder is exactly the image that will fall on the sensor when the mirror is raised during exposure.  Many DSLR cameras now also include a ‘live view’ image capability for the screen. For photographing small or moving subjects, particularly in high ambient light conditions, the DSLR viewfinder is the most satisfactory system. 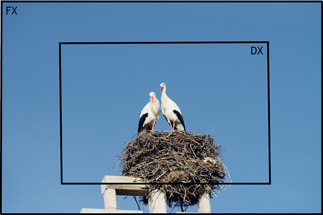 The DSLR camera is perhaps the best starting point for someone who expects to increase and maintain an interest in photography.  Even if you are starting with one of the entry level cameras it is important to remember that the lens on this camera can be used with a more sophisticated (and expensive) camera providing you remain with the same brand.  There are two major manufacturers who provide the greatest range of equipment, Canon and Nikon, but other makers have high quality products that can be used to produce outstanding results.  Most DSLR cameras come with either an FX (full frame) sensor, which is the size of the frame on 35mm film, or the slightly smaller DX sensor.  Care needs to be taken at this point with the choice of lens since one labelled DX will not be compatible with full frame although the reverse is not true and an FX lens will cover the DX sensor perfectly.  One confusing aspect of the sensor size is the crop effect produced for a single lens.  Because the sensor is placed in the same position in relation to the lens regardless of its area, the image created by the lens is identical but the DX sensor only records the central portion of this image.  When the digital image is displayed on the camera screen or is imported into processing software the image fills the entire screen.  This produces the effect of an apparent magnification of the image from the DX sensor of approximately 1.5.  Similarly if a wide angle lens is used the FX sensor appears to give a wider view than the DX sensor (see illustration).

HOW MANY PIXELS DO I NEED?
The marketing information for cameras often makes a big point of the number of pixels in the sensor, which now ranges up to 35 million, as we have already seen larger pixels may give better dynamic range and less noise so that 16-25 million pixels could be more than adequate.  Certainly at this pixel density the quality of the lens is the limiting factor in resolution, however, more pixels prevent the image pixelating (breaking up to reveal individual pixels) as the image area is increased or the image is heavily cropped (as is often necessary with distant photographs of birds).  The advice might be therefore that if you intend to print very large poster size images more pixels are better, but for most applications 16-25 million pixels is more than adequate.

WHAT IS THE ADVANTAGE OF A MORE EXPENSIVE CAMERA BODY?
Any of the DSLR cameras from the major manufacturers will produce stunning pictures under the right conditions, and this is the key. The more sophisticated the camera and therefore the greater the ability of the photographer to manipulate the parameters for taking the photograph the wider the range of conditions under which perfect photographs can be taken.  The more expensive camera bodies, often referred to as ‘professional,’ are also designed to withstand more extreme conditions ie. the body is mechanically stronger and the water and dust seals allow them to be used in more extreme environments.  Camera bodies from the major manufacturers do have significant trade-in value, providing they have not been abused, and so a gradual move up the range of bodies available can be contemplated.  Manufacturers are also continually improving their offerings and a desirable feature introduced by one manufacturer will inevitably appear in the products of others in due course.
In the next article we will deal with lenses and how to select the most suitable for each application.