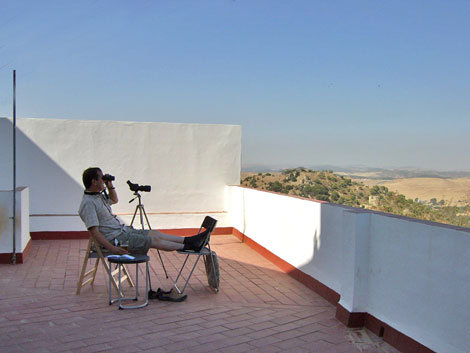 I’ve always denied having a birding ‘patch’, but it’s gradually dawned on me that the terrace of my house in Alcala de los Gazules is a patch, albeit an extremely small one. I’m being a little disengenuous here since the terrace has an 180° view across open countryside stretching from the Alcornocales park to the right and Medina Sidonia (c18 km away) to my left. Risking life and limb by leaning out a little further than’s comfortable I can even see Vejer de la Frontera (c32 km away).  Naturally, for me the big advantage is that to get from my bed to my patch I have to walk all of 10 paces and then up a dozen steps. As indolence has always been my strong suit as a birder, it couldn’t be more ideally placed.  In the morning the terrace is in shade which makes for ideal viewing conditions (light behind me and blissfully cool) and although the shade disappears for much of the afternoon it sneaks back in the evening.  The downside is that the steep slope in front of the house means that the first bit of terra firma fully in view is 250 meters  below and that the tall shade giving wall behind me also entirely blocks the view.  Hence ground and bush hugging birds can be in short supply unless they happen to fly over and sometimes I have to be quick to identify birds going over fast.  As a result, I still haven’t seen Woodchat Shrike (common birds just along the valley) and I’ve seen more ‘possibles’ than I’d like.

From mid February, usually our first visit of the year, through into mid-summer I’m awakened every morning by the urgent, incessant but  thankfully cheerful, ‘chay-chay-chay!” of our local Lesser Kestrels.  They are around all year, but the numbers thin out in the autumn and number only a handful of birds in winter.  We have between four and five pairs of this entertaining little falcon nesting in a crumbling tower, part of the old town walls, which abuts onto our terrace.  They are up at dawn, thankfully not too early this far south,  as they do make a bit of a racket.  In the day they tend to make themselves scarce feeding over distant fields and pastures, but come the evening they return in force.  Most evenings 30 odd birds, mainly males, noisily play chase above the house.  Seeing 60, 70 or even 100 birds there isn’t unusual.  Although the large Tree of Heaven across the street obscures the view to the north, it makes a splendid perch for resting Lesser Kestrels.   Later in the year for a few weeks from early April onwards, the kestrels’ role as an avain alarm clock is challenged by the rippling bubbling of passing Bee-eaters.  It’s a hard call to resist and always gets me up to the terrace in double quick time.  The third string as a wake up call is Spotless Starling whose burbling, interspersed by mimicry, is always a joy.  I vividly recall one morning hearing one bird chortling away giving a splendid imitation of Golden Oriole.  Its seemingly extraordinary talent was quickly explained when, on the terrace settling down with my morning coffee, I realised  that behind the starling there really was a luminescent yellow male Golden Oriole in full song!

Rewarding though it is to see (and hear) Bee-eaters and Golden Orioles, what really keeps me watching are those birds of prey.  Despite a fairly modest terrace list of a hundred species, a fifth of them are raptors (or a quarter if you include owls). I’ve already mentioned my favourite, Lesser Kestrel, but there’s a lot more to see.  You’ve really got to be alert to pick out the odd passing Common Kestrel with a few dozen Lessers wheeling around although the Lessers sometimes help by mischievously mobbing their cousin.  Unless you’re careful distant Hobbies – I usually see a few migrants in spring and autumn – can get lost amongst the kestrels too. Bulkier Peregrines are harder to miss and if you don’t see them the Lessers will, once again, make sure you know one’s about.  The single Merlin I’ve had, though,  powered through late in the season with no protests. Sparrowhawks, most common as autumnal visitors, are always watched carefully and usually chased off.  For sheer panic and mayhem, though, nothing comes close to Goshawk.   I’ve only seen one pass close over the terrace, but when it came barging through it couldn’t be missed as every single Lesser Kestrel became vocally hysterical until, and even a little after, it was lost to view.

Not being a threat, Lessers tend to ignore larger birds of prey like Griffon Vultures although they’re not beyond playfully teasing them as they glide over.  Griffons mostly come over in ones or twos at great height during the day, but in the mornings they may come over low and mob-handed. They sometimes form large ‘kettles’ (500+) that lazily spiral around until they drift out of sight.  By lowering and twisting their long sinuous neck they’re one of the few birds that can get a good view behind them as they cruise around; useful for checking possible carrion although disconcerting if it’s you they’re looking at!  I’m still hoping for a definite  Ruppell’s (despite several ‘possibles/probables’) or the smallest whiff of Black Vulture, but despite their sharp decline Egyptian remain tolerably regular on migration.  Larger eagles get the same treatment as vultures.   If there’s a more handsome eagle than the dandyish pale morph Booted, I’ve not seen it. They breed close by and on a good day during migration I might see 80-90 birds passing through. Pale morph birds are easy to identify, but high flying dark birds can be easily confused with Black Kites, Buzzard or even Marsh Harriers. Short-toed Eagle are tolerably frequent with 20 or 30 in a morning during passage being nothing out of the ordinary.  Hovering at truly remarkable heights above the valley their visual perspicacity is reflected by their massively broad head which must help their stereoscopic vision.  Other large eagles are rare; a single Bonellis Eagle (an immature) and only a handful of Aquila eagles: a single juvenile Golden Eagle and 4-5 distant ‘possible’ Spanish Imperial Eagles (they breed nearby).
Naturally Black Kites are the commonest of their tribe although far less frequent than they are lower down along the A 381 near Medina.  They usually come through in dribs and drabs although late one September evening about 1,500 birds dropped into the valley below the house to roost.  Red Kites never appear in large numbers  with 2-3 birds being my daily maximum.  The same applies to Osprey even though they now breed nearby.  Harrier numbers are understandably dominated by the elegant waif-like Montagu’s which slip through in handfuls during spring and autumn. Marsh is much less common and my only Hen Harrier brazenly flew low over my head one October – an unlistable 70m from my front door!   Common Buzzards breed locally, but although I’ve had a couple of ‘possibles’ I’ve never been able to convince myself that I’ve seen a bona fide Long-legged Buzzard here. 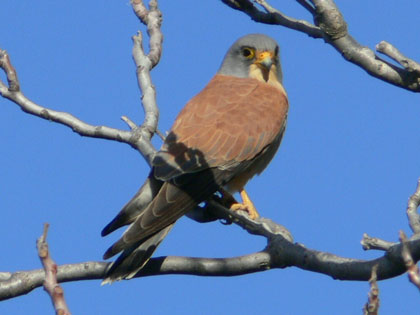 The final raptor I see from the terrace vies with Lesser Kestrel for my own personal top spot: Honey Buzzard, a gorgeously variable pigeon headed raptor. They could be taken for Common Buzzard by the unwary except that, unlike that species, they’re most often seen here in lose flocks rather than odd birds. I mainly see them in early May, as they head north, and again in August/September, as they flood south. I’ve seen up to 2,000 birds head north in a morning, but it’s the memory of  finding 600-700 emerging from their overnight roosts in the valley below the house that is my most enduring memory.  I can do no better than quote my diary for that day “With light, elastic wingbeats and sometimes faltering action in strong winds, they give an impression of weakness and vulnerability. Yet they also display a steeliness and determination to keep going when other species have given up.  They slip, almost unnoticed, low amongst the trees gradually aggregating into small loose flocks before speculatively attempting to circle upwards.  Sometimes they succeed, but often they waiver, stall and drop …. only to come beating up, undaunted, once more.  Yet once they feel the breeze beneath their wings they can spiral up with surprising speed.  Most birds prefer company so following a lone bird is often a good way to locate a small flock. Once a flock begins to consolidate then, wraith-like, more birds suddenly materialise out of the ether.  It is this ability to surreptitiously hug the canopy before suddenly, and rapidly rising high in a giddy spiral, that makes them seem almost spectral in their sudden manifestations.  As suddenly as they appear then so too do they vanish.  A moment’s distraction and you find that the flock 50+ birds has suddenly vanished into thin air making them seem as much ghostly sprites as flesh-and-blood birds”.

There’s not the space to do justice to the kettles of hundreds of migrating White Stork that not infrequently enliven the day nor the much smaller groups of Black Stork that add a little spice.  Scythe-winged swifts, mostly Common, but also a sprinkling of Pallids and, on the right day, hundreds of Alpines also deserve more acknoweledgement.  It’s hard too to dismiss the autumnal flow of passerines with its promise of Pied Flycatchers, Redstarts or the unexpected (including Long-eared Owl one year).  Even  late autumn/winter with its Black Redstarts, Blue Rockthrushes and flights of larks demand serious consideration, but there’s no disguising the fact that it’s the raptors that keep me glued to the terrace scanning the skies.  So, despite the promise of La Janda, Tarifa and other spots nearby, I find that lethargy has distinct benefits!