We all know that Andalucía is a great place to be a birder. But there are some misguided fools, who live here or visit in order to whack a small white ball, into a very small hole, on very big golf courses. I try to do both and surprise, surprise they’re not exclusive. In fact, golf courses are often good sites to see birds because they generally have some fresh water ponds, and also the open spaces mean that the birds are generally more visible than in the countryside.
My course is Aloha near Marbella­, we have ponds, streams and wild areas that attract all manner of birds, and which in fact ought to be recognised in the rules of the game. The rules allow you 5 minutes to search for lost balls, sadly they do not allow you any time at all to search for that dratted Cetti’s or to discover what bird is making that distinctive call from out-of-bounds. Nevertheless I contrive to bird surreptiously as I hack around the rough with my 8 iron. 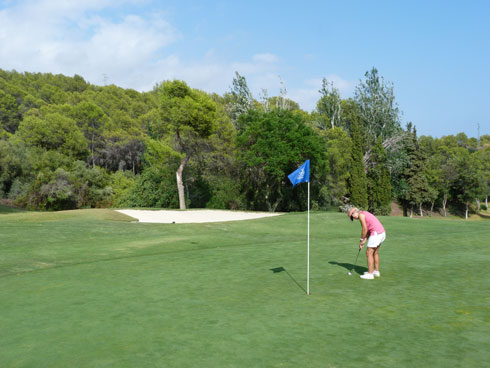 I know that golf courses get bad publicity because of environmental impact and I, like many, am horrified by developments which destroy acres of virgin woodland in order to construct courses. But there is a place for everything, and down here on the Costas the golf courses are green oases in the urban landscapes. In the same way that town gardens attract birds, the fairways and artificial ponds provide niche habitats for many species. OK, perhaps not the stars of Southern Spain’s avifauna but still a varied selection nonetheless.

The stars at Aloha are probably the raptors. In summer we often see a Booted Eagle soaring overhead, gliding effortlessly with very few wing beats. Whilst they will choose nest sites up in the nearby hills and valleys, the edges of the open fairways are ideal hunting grounds for them. They seem to ignore the golfers completely as they scour the ground for lizards, voles and mice. Of course we have our resident Common Kestrels and occasionally a Sparrowhawk comes into view, trying to spot an unwary passerine as it strays from the cover of the trees.

The old trees attract Great Spotted Woodpecker, Short-toed Treecreeper and Owls. When I first arrived in Andalucía I thought that the strange calls I heard on the course were cats, now I know they’re Little Owls who can sometimes make such a din calling to each other, that play stops.  At night I hear Tawny Owls on the courses around my house, not often, and I’ve never managed to see one yet, but I’m more upset by ‘dipping’ (twitchers term apparently, for when you miss seeing a bird that you know is there) the Long-eared Owl which stayed around for 3 or 4 weeks one winter, a few years ago. It had a very strange and unmistakeable call; a hollow HOOO, exactly like a short blow into an empty bottle. I searched the trees on the course for hours during the day, but never did spot it.

I guess the call I like best in the night time is that of the Red-necked Nightjar, they seem to like the olive trees which are often put on courses for landscaping. I really feel that summer is beginning when I first hear the ‘Jars’. I had to laugh when I first got to know my pals, Alison and Phil; we were sat on their terrace, next to another golf course, when a Nightjar started-up. They said, “Oh, sorry about the noise, we think it’s the course watering system doing that.” After hanging around with me for a while, they know a bit more about our birds now.

Aloha has the usual suspects: Woodpigeon, Chaffinch, Great Tits, Blue Tits and Crested Tits are in the pines which border the Northern holes. Finches are represented by Greenfinch, Goldfinch and Serin. The Hoopoes do a fine job of aerating the greens looking for worms and leatherjackets, but I don’t think the green keepers are over fond of them. The Starlings (both species) do likewise but don’t make such a mess. Spotted Flycatchers, Firecrests, and the odd Woodchat shrike are in the wilder areas, and throughout the day the Barn Swallows seem to have slalom races as they weave in and out of golfers as they hawk low over the fairways. Martins are around the clubhouse, along with a multitude of uninvited diners – the Sparrows. We’ve banned them from the club a long time ago, but they take no notice.

Is it my imagination or is there an explosion of Blackbirds just now? I can look out on to the golf course from my kitchen window and regularly see 20 plus. I don’t think they’re families either.

The ponds and streams provide some of the more interesting sightings because we have a good growth of reeds and bulrushes in shallow running water. The normal Mallards, Coots, Moorhens, and Little Grebe are there, delighting the members each spring with their rafts of youngsters.  And Little Egrets and Grey Herons often put in an appearance. But I’ve also seen Kingfishers quite often, and Wigeon once. The ever-so-hard-to-spot Cetti’s are there in the undergrowth somewhere, and Chiffchaff, or is it Willow Warblers (I can’t tell) hang precariously on bulrush leaves then dart out to catch the midges over the water. In the winter we get Cormorants on the larger ponds and sometimes Common Sandpiper and Little Ringed Plover.

Back on the fairways, Cattle Egrets are common at times of passage and three species of Gull descend on the fairways after each rainfall, more so in winter, which also applies to the Black Redstarts. We get both species of introduced Parakeet; Monk and Rose Ringed, though thankfully we don’t have any over-noisy nest sites as yet.

I have seen Turtle Dove but sadly not for a few years now, my theory is that Collared Doves are elbowing them out. Did you know that the first Collared Dove seen in Britain was in 1956? It was in north Norfolk apparently, though at the time the record was so hush-hush that the location was kept secret; little did they realise that it was just the start of a massive westbound invasion.

I’ve saved my two favourites for last; the common-as- muck Sardinian Warbler, such a cheeky chappie scolding me from his bush as I ferret around trying to find my b****y ball, and  that surprising master of camouflage, the Golden Oriole. We have an area behind the 15th green which borders the wilderness of Turtle Lake; the Orioles like it and sing beautifully from there, but can someone explain to me how a 25 cm. bird which is startling yellow with jet black wings and a bright red beak, can be so totally invisible in the trees?