How quickly we become blasé about the birds we once considered exotic! When we first arrived in Andalucía I got Tom (my husband) to abandon the car in Arahal high street for me to jump out and take a photo of a White Stork on its nest. When we continued to Marchena, where I realised that there were Storks’ nests on the town hall, every church and any available tall structure, I felt somewhat foolish. Storks continued to impress, particularly the magical sight of them roosting in the neighbouring cork oaks silhouetted against the setting sun. These days I am more likely to take note of a Chaffinch (rare in our area) than a White Stork! Nevertheless, I derive great enjoyment from the birds I see in and over our garden all year round – so many of which would have seemed exotic before we moved here. 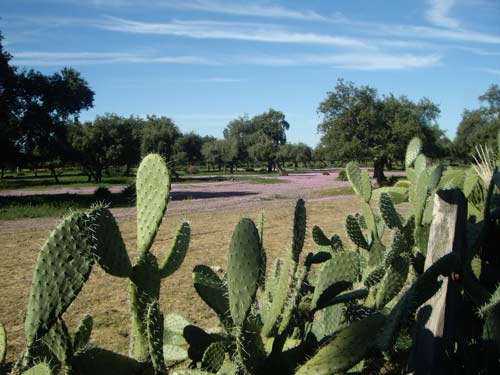 My patch is our garden (and most interestingly the skies above it) which, together with 18 other properties, each with a large garden and orchard, comprises an area of lush vegetation with palms, pines, elms and well-irrigated fruit trees, hedges, shrubs, and lawns. With summer temperatures often in the high 30s, small birds must think this is an oasis in the desert.  Our garden is bordered by a lane with prickly pears and then a hacienda with cork oaks and arable fields beyond. The cork oaks offer nesting sites to a range of birds, the abundant rabbits feed Buzzards and Tawny Owls, and the cows attract Cattle Egrets. The other gardens back onto olive groves with stands of eucalyptus dotted about. Unfortunately our patch is completely flat so we don’t have great visibility into the surrounding fields (although Tom has promised / threatened to build a tree house, and has been seen up a ladder with binoculars on occasions).

We are situated close to the A92, 10 km from La Puebla de Cazalla, about 130km due north of Gibraltar, 60km from Seville, and a few kilometres south of the Guadalquivir basin, which is an area of intensive agriculture picked out on bird maps as being devoid of most small birds. Six kilometres away is a rubbish tip which attracts hundreds of Black Kites, White Storks, Cattle Egrets, and thousands of Gulls (depending on the season) and Red Kites. In February scores of Black Kites squabbling and dodging pursuers can present a traffic hazard on the autovia. 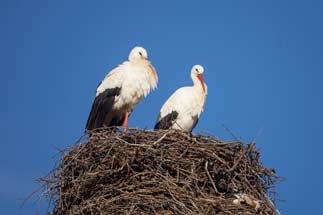 We moved to Spain in August 2006. Bee-eaters perched on branches and wires all around, though they have been less abundant, though still common, in the years where wet springs have rendered the banks of the stream in the adjacent field too wet for nesting. The pair of breeding Woodchat Shrikes obviously did not like the new owners as they have not bred since. Hoopoes are common residents and in early September a Western Olivaceous Warbler, Melodious Warbler and Orphean Warbler spent a week in a damp, shady corner flitting from grass to oleanders.

My son arrived in early September, set up his sun bed and declared it was not a bird-watching holiday. Minutes later he was racing for his camera to video 50 White Storks, and kept it handy for the Griffon Vultures (common all year), 2 Eygptian Vultures on 14 September (not seen again until 2013), Booted Eagles (which grace us frequently from January until September) and the much less frequently seen Short-toed Eagle. Each autumn, (on 21 September in 2013) I am surprised by the striking plumage of the immature Red Kite, common all winter. Rare treats are the sight of a male Hen Harrier in winter and a male Montagu’s in spring quartering over the orchard. Black Kites are common from February to August, with a flock of 400 on 9 August. Common Buzzards are resident in the cork oaks and Kestrels in the olives groves. Sparrowhawks we see only occasionally on migration. Two adult Golden Eagles annoyed our Buzzards on 16 March 2012, and 2014 started well with an immature Golden Eagle on 14 January. I tend to think the absence of a Honey Buzzard on my list must be my failure to check the buzzards in August! When gardening, I always remind myself to look up as you never know what will pass over. One day a Night Heron flew over, honking to declare its presence (was it lost?), and on 21 September a Black Stork glided low overhead. Most of the year we have lunch on the lawn. “Setting the table” means knives, forks, salt and binoculars and we are very often treated to a passing raptor and sometimes to a kettle of raptors joined by Ravens and White Storks. 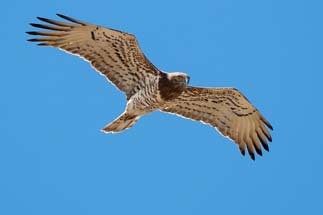 When we arrived here in August 2006 it was a learning curve for me (fortunately there is always a lot to learn about birds). Day after day at about 3 p.m. I grabbed by binoculars and hurtled to scan the cork oaks to discover what made the angry “keeking” for the few minutes until I arrived. I never saw anything, but eventually I realised it was a female Tawny Owl, presumably grumpy at being disturbed, perhaps by the Buzzards taking flight after their siesta or by one of the many Green Woodpeckers. Another afternoon I searched for the owner of the strident, piercing, persistent “Ke …ke …ke …ke”, which I hoped would be a rare bird of prey, before realising it was a young Common Buzzard angrily demanding its parents return to feed it. And was that a barking dog or a Raven? Answer: a Raven. And was that a squeaky wheelbarrow or a Raven? Answer: a Raven. And that hissing / spitting noise (described much more decorously in the bird books)? Answer: a Hoopoe.

Although the stars of the show may be the Egyptian Vultures, Golden Eagles and Black Stork, the winner of the long-service award is undoubtedly the Red Necked Nightjar. These birds have arrived on cue most evenings from the beginning of May until the end of September each year. Fifteen minutes after sunset, and five minutes after the appearance of the first bat, they suddenly appear and glide soundlessly over the pool and do their circuits. In summer we usually have friends and family staying, who have also become enthralled with our Red Necked Nightjars. In May we watched one Nightjar on its perch (previously on a cork oak, but more recently on our neighbour’s dead poplar) repeating its “chokka-chokka” call, falling silent as the partner flies in and they fly off together performing their wing-clapping courtship. A great sight! My first sighting was at dusk on a slip road onto the autovia where there seemed to be a dead bird laid out on the tarmac. When I was within a few feet it startled me by flying off and 20 yards further on a second Red Necked Nightjar did the same. I later read in the bird book “Aves de España” that this is typical behaviour. In 2006 and 2007, and possibly subsequently, I think they bred in the Eucalyptus woods 400 metres from the house. We would look in vain from the path until one would rise from almost under our feet and fly about 30 metres, remaining camouflaged only to startle us again as we were almost treading on it. Was it trying to lure us from the nest? Certainly the Sardinian Warblers employ a similar tactic when I accidentally approach their nests in the hedge. 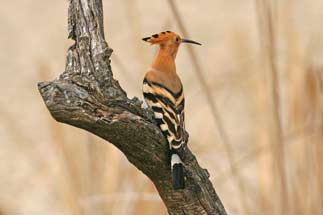 They creep along in the hedge calling to lure me away, rather than flying away as they would do at other times of year.
I enjoy the plaintive call of the Stone Curlews as they fly over at dusk. They breed in the olive groves close by and neighbours complain about them becoming raucous in spring! A neighbour with a garden backing onto the olive groves finds them drinking from her pool.

Another star, which only puts in a few appearances each year, is the Golden Oriole. The Spotless Starlings, (known by our non-birdwatcher neighbours as the “telephone bird” because their accurate mimicry sends our neighbours running to answer their mobile phones), can also do a passable imitation of a Golden Oriole. However, when the genuine article turns up, it is always a thrill to hear its fluty call. Will we find it this time? Two early mornings a male Golden Oriole obligingly sat openly in the top of the pine and sang to us.

The first year we recorded 65 species and surprisingly we have only added 6 species since. But I still enjoy listening to the cacophony of bird calls in spring – the Common Cuckoos, Hoopoes (thank heavens they relieve the monotony of their 3-note call by occasionally adding or subtracting a “hoo”!!), Green Woodpeckers and Nightingales dominating but the Great Tits, Finches, Serins, Blackbirds, Doves and Sardinian Warblers having their say. Friends on the phone find it hard to believe that the birdsong they are hearing is live and real! And after the quiet of late summer the Robins and Blackcaps arrive back at the end of September, bursting into song and prompting the Nightingales to sing for their territory before leaving in early October. 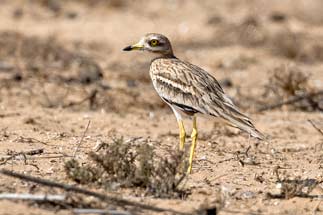 On summer afternoons I lie on my sun-bed in the shade of the pines with a book and my binoculars and watch the Nightingales under the hedges and, in the trees, the Short-toed Treecreepers, Spotted Flycatchers from late May until September, Pied Flycatchers for weeks in September, abundant Goldfinches, Greenfinches and Great Tits, Serins and Blue Tits (though both are more common outside midsummer), Sardinian Warblers, the occasional Spanish Sparrow and Western Olivaceous Warbler, and hope for a new visitor.

I often think of a good day’s bird-watching as a trip to Donaña or the mountains and have looked blankly at people who have described our area as having great bird-watching, but then I realise I may have started to take for granted the wonderful and exotic birds which fly over the garden, and the abundance of birds and birdsong within the garden. When my Spanish friends ask whether I get bored living in the country, I reply “NEVER”.