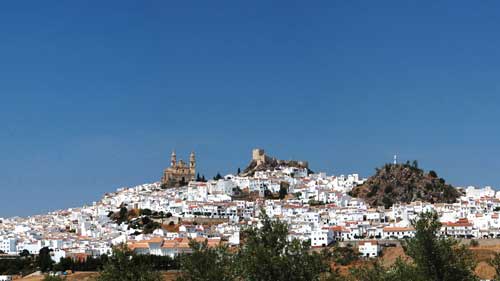 North of Ronda lies my village of Olvera, my local patch; from here I travel west to Campillos and Fuente de Piedra, east to Arcos de la Frontera, north to Osuna and south to Montejaque.  Olvera is a large village with a population of approx. 8,500 and it lies in the province of Cádiz. It is on the northernmost tip of the Pueblos blancos (White villages) route of Andalucía and stands majestically on a hill proudly overlooking thousands of acres of olive groves.
I am going to concentrate on Olvera and the immediate surroundings from the Peñón de Zaframagón to our friends’ pottery just to the south of Olvera. As the summer comes to a close I am wondering where our Lesser Kestrels are by now as they left Olvera at the start of August and will not return until the spring. They nest in the walls of the church and castle and you can see them whilst you are having some tapas in the bar behind the church, or the ones at the side of the Peñón by the market.  Café con leche and a mollete with aceite and tomate as the Lesser Kestrels fly over your heads or at eye level, what more could you ask for?  We have had a White Stork around the church a few times this summer which could be checking out whether here would be a good nest site for next year. We will have to wait and see. 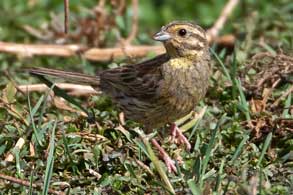 We have a large population of both Swift and Swallow but the House Martin seem to prefer Pruna just to the north, where there are houses full of nests and at the end of the summer there are large roosts on the cables that run along the front of the houses. We do have some in Olvera but not as many. As the summer turns to autumn the Hirundinidaes will be leaving, and our skies will be the poorer for that.
The most important site close to Olvera is The Peñón de Zaframagón, one of the largest Griffon Vulture colonies in Europe and home to a pair of Bonelli’s Eagle.  The Griffons are present all year round along with Jackdaw and Spotless Starling (very clean birds) but during the summer their numbers are swollen by Egyptian Vulture and Alpine Swift.  The Peñón de Zaframagón is about 10km from Olvera by road or 15km if you walk along the Via Verde (walking and cycling route) from Olvera.  From the viaduct which is at the front of the Peñón you look up through the gorge to the east side where most of the nests are to be found.  As you stand on the viaduct the Vultures fly over your head and then go off to find some food for their chicks. In the visitors centre you can watch live views of the nests in the spring and recorded highlights the rest of the year, at a small cost of 1€, expensive for me though as I visit so much to see what they have recorded since the last time I was there!
I have also seen Crested Tit, Cirl Bunting, Chough and Bee-eater. One day last winter I was walking towards the visitors centre from the viaduct and a weasel ran out in front of me heading towards a small bush at the side of the track.  It stopped and looked at me for a moment then ran under the bush.  A second or so later it ran back out from the other side of the bush behind me and back to the other side of the track. 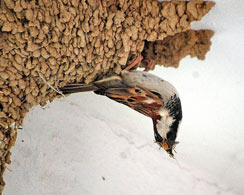 This was the same day I saw the Crested Tit.  Another spot I visit frequently is our friends’ house in the campo (countryside) who have a pottery. I spend a lot of time down there and it is a very rewarding spot with a pair of resident Ravens which nest in the woods by the river. On the way down nearly every day the Little Owl says hello from the top of the “no overtaking” sign but he will not stay there long enough for me to get a photo of him.
Last winter the river changed its course and they now have a ravine running through the middle of their field which was good for me as this year we had a pair of Little Ringed Plover nesting on the river bank and I spent some time watching the parent bird doing it’s “chase me as I have an injured wing” bit.  The banks are now steep and sandy; a great place for the Bee-eater to nest which they did (I spent a long time in a sweaty hide but no photos and as you have guessed as soon as I left the hide they flew straight into the nest hole! Better luck next year). 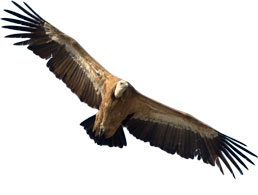 Last year a pair of Red necked Nightjar nested somewhere near the house, and at about 10.15pm every night you could hear a strange noise from the cliff overlooking the river. If you walked to the middle of the field the bird would swoop down and clap its wings at you until you returned to the house, then it would vanish into the night not to be heard again until the next night.  Every year they have a pair of Golden Oriole that nest in the Poplars at the side of the river and they have a fine time feeding on the mulberries when they come into fruit. All you see is a flash of gold and then into the tree where they stand proud and take as many mulberries as they can get into their beaks and then off they go. 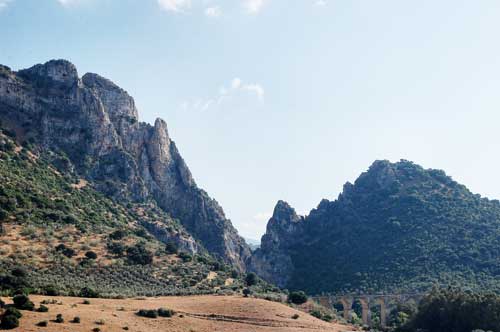 There are always Swallows at the pottery but two years ago a pair of Red-rumped Swallows took over a Swallows nest and built an entrance tunnel on it, but it was too late in the year for them to breed.  During the winter the House Sparrows, which live all year around at the pottery roosted in this nest. The next spring the House Sparrow nested in that nest, and as the season progressed the tunnel that had been built by the Red-rumped Swallow was slowly taken apart until only a small piece was left.  Whilst doing my pool boy bit at the house next to the pottery I heard a Sparrow screaming the alarm call and it flew just over my head and only a few inches behind it was a Sparrow Hawk. They crashed into the hedge that surrounds the pool.  I was not fast enough to run around to the other side of the hedge to see whether the hawk caught the sparrow, but it just shows you don’t know when something exciting is going to happen so keep your eyes open all of the time.
Frank Hair – ABS member
www.birdinginspain.co.uk