La Rondeña sits on a ridge in the Sierra Cabrera, a range of hills some fifty kilometres north east of Almeria city. 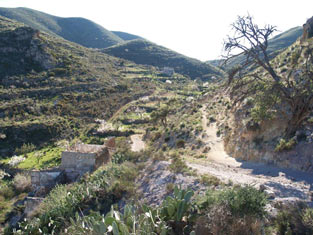 Patchwork, it’s always been a facet of birding that I’ve enjoyed. There’s something rather satisfying about working your own area on a regular basis, finding your own birds, turning up the occasional scarce visitor, monitoring the changes throughout the year and from one year to the next. It does have its drawbacks however, especially if your local patch offers a fairly limited range of habitats and then consequently birds, as does mine, the Millhouses Park/Ecclesall Woods area in Sheffield. It helps therefore if you have a back-up patch. I have, but it lies about eighteen hundred kilometres south of where I live.
La Rondeña sits on a ridge in the Sierra Cabrera, a range of hills some fifty kilometres north east of Almeria city. The coast lies about ten kilometres to the east. At 450 metres above sea level the house overlooks a shallow basin with the land rising steeply to the south to summits at just over 600 metres. The valley floor supports a collection of small olive and almond groves and vegetable patches. Away from the cultivations and scattered houses this is a rock strewn, hilly, semi arid landscape but with one exception, the barranco (ravine). Across the valley from the house and above the fuente (spring), where a stream springs from the rock face, is a narrow ribbon of well irrigated terraces that stretches for a few hundred metres up the narrow cleft of the barranco and disappears from view beyond the ruins of a long abandoned settlement. 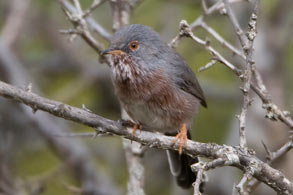 And this landscape, thanks to the hospitality of my friends Kevin Borman and Troy Roberts, is my patch in the sun, albeit one that only gets my attention for a few days each May. It’s easy to work. With vegetation sparse away from the olive and almond trees, and the weather usually conducive to early morning walks, birds are pretty easy to find. Based on the same two kilometre stroll done on several mornings on each visit over the last four years I’ve got a fair idea of the numbers of breeding birds on the patch. It varies from year to year but approximate territory counts of some of the more interesting species go like this:
Common Scops Owl 1,   Turtle Dove 2,   Thekla Lark 10+,   Hoopoe 1,   Red-rumped Swallow 2,   Black Wheatear 4,   Black-eared Wheatear 3,   Woodchat Shrike 3,  Sardinian Warbler 10+, Spectacled Warbler 1,   Dartford Warbler 2,   Blue Rock Thrush 1,   Spotless Starling 5,   Serin 4,   Corn Bunting 5+,   Cirl Bunting 3,   Rock Bunting 2.
There are plenty of other more familiar breeding birds in the valley and several interesting regular visitors that probably breed not too far away. These include Short-toed Eagle, Alpine Swift, Great Spotted Cuckoo, European Bee-eater and Eurasian Crag Martin.
All this is tasty enough but there’s much else besides. We’d been there all of 24 hours on our very first visit when Kevin’s garden list increased by one, a frustratingly short staying Rufous-tailed Scrub Robin, the only record there to date. And then early on our next visit in 2008, a nightjar of Kestrel like proportions lifted from our feet in the barranco. Red-necked Nightjar, again our only sighting to date but a trigger to make as frequent a visit as possible to this ribbon of green in the semi desert and a moment of realisation; this is a place where northbound migrants pause and feed before moving quickly on. 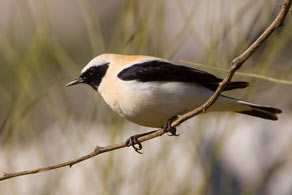 Ten kilometres from the coast with a more or less south to north alignment, the barranco appears to be something of a funnel for newly arrived visitors. No two days are the same. The day after the nightjar find, the trees held Spotted Flycatcher, Garden Warbler and Whitethroat. They’d all gone by the following morning. In May 2009 it got better. On one morning the trees held a Melodious Warbler. The next day it was Redstarts, Wood Warbler and Pied Flycatchers feeding up before moving on. The following day Golden Oriole and Western Orphean Warbler were the star birds. Early May 2010 saw a similar mix but with Pied Flycatchers in the ascendancy though these were brighter Iberian birds, even more contrastingly black and white than British Pieds. The barranco is a joy in early May. Numbers of birds are never high but that means very little gets missed and everything is self-found. There are no other birders around and probably never will be. Indeed, the only human being I’ve ever encountered on my walks is the local goatherd, Paco. It’s wonderful.
And one final ingredient to the patch mix, visible migration. On May 3rd 2010 we’d had a good day’s birding at the coast, enjoying all that the saltpans at Cabo de Gata and the wetlands at Rambla Morales had to offer. Back at La Rondeña the early evening turned cloudy with a north westerly breeze. Cool but not so cool as to stop pre dinner wine being consumed on the patio overlooking the valley. Normally the bins and scope are trained downwards. Not this evening for the sky was filled with Common Swifts, hundreds upon hundreds hammering northwest into the breeze and in the far distance, many raptors, maybe two miles away. But this is a corrugated landscape and their path took them behind distant ridges and out of sight. No matter, I was up early the next morning. The barranco held new arrivals in the shape of several Spotted Flycatchers, a Redstart and a Pied Flycatcher and as the morning progressed the Swift passage resumed, four or five hundred per hour going through until mid-afternoon. And with them, Honey Buzzards, at first, single birds, then twos and then a party of eight low over La Rondeña. And with it a birding tragedy. Kevin and Troy cultivate three terraces below their property, growing an impressive array of fruit and vegetables on a stony slope in the driest corner of Europe. They work hard, too hard, for as they toiled heads down to the soil they were oblivious to the raptor-fest above them and to my shouts on the other side of the valley.
And that was our last day there in 2010 but out of a chance conversation with a fellow Sheffield birder on our return to the UK, came the suggestion that I should look at a Gibraltar birding web site to see what was happening there on that same day. Sure enough, thousands of Swifts and large numbers of raptors were moving north and northwest there in the same period. We were over 300 kilometres to the east but seeing the same event. How broad a front were these birds moving over? What kind of numbers were involved? Add that to the other questions that arise as I get more familiar with the patch. What moves through the valley in March and April? Does a different assemblage of migrants make use of the barranco at other times and if this one little pocket can turn in such a variety, what about the next valley, the next range of hills or similar habitats nearer to the coast?
I’ll probably never know. I’m very content to work my patch in the sun for a few days each May.