It was when a birder commented on one of my photographs that they would not have associated a Crested Tit Lophophanes cristatus with Marbella, that I started to think about the wonderful birdlife that we are blessed with here on the Costa del Sol. Most think of Marbella as big boats and nightlife, accentuated by TV programmes such as “The Only Way is Essex” with their “Marbs” specials. 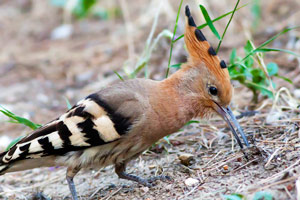 I am so lucky to have chosen Marbella as my home for the past 23 years and enjoyed, with my family and friends, the wonderful sights, sounds and, above all, the countryside that is visible from the beach, but often ignored by the visiting hordes. I have lived on the northern edge of Marbella for the past 12 years, only 10 minutes walk from the main bus station, yet my list of birds seen or heard from the house and garden stands at 80 species. Just some of the highlights include a party of 5 Ortolan Buntings Emberiza hortulana on migration, a Blue Rock Thrush Monticola solitarius on the roof terrace and accepted records of Long-legged Buzzard Buteo rufinus and Eleonora’s Falcon Falco eleonorae!
Most of my birding out of the house is conducted with my faithful companion, Roddy. He is a padenco mix dog that follows me blindly with the utmost trust and companionship. We have several different walks, but our favourite, and therefore my local birding patch, is the walk behind the new cemetery in Marbella. It is also Roddy’s local patch, since he is a rescue dog from “Triple A”, the local dog pound, which is only a couple of hundred metres further up the track! I don’t think he knows how lucky he is, as he often annoyingly frightens off birds that I’m trying to photograph!
It is our preferred walk since it has plenty of shade for those hot sunny days, plus it is the least muddy and sheltered in the winter rains. There is something very un-appealing about the smell of a damp dog and Roddy hates being hosed down before being allowed to enter the house!

And so to the birds.  Obviously, given its privileged position on the main migration routes between Africa and Europe, anything can turn up, and it usually does!  The area is overflown by many species of migrating raptor, including Booted Eagle, Black Kite, Short-toed Eagle and the odd Osprey in autumn. Common Kestrel Falco tinnunculus and Peregrine Falcon Falco peregrinus are resident, being seen regularly throughout the year, the latter recently nesting on a nearby hotel. When the trees allow, I am sometimes lucky to get a tantalising glimpse of Bonelli’s Eagle high over the mountains.  During a normal year we can witness the normal flow of the seasons.  Ever present though, are the woodland birds. 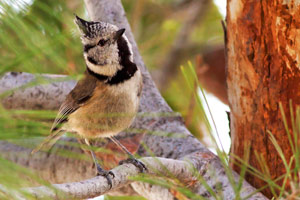 The route is at the foot of the Sierra Blanca mountains and the main vegetation is Mediterranean scrub or matorral, together with pines and the odd Eucalyptus trees. Crested Tits are always there.  They seem to prefer their own company and are best seen during the breeding season, when the young chicks are ever demanding.  However, the most numerous tits are the Long-tailed Tits Aegithalos caudatus, which do tend to associate with others such as Coal Tit Periparus ater, BlueTit Cyanistes caeruleus, Great Tit Parus major, Short-toed Treecreepers Certhia brachydactyla and Firecrests Regulus ignicapilla.  Firecrests are quite common, but they are so difficult to get a decent picture of as they flit around in the canopy of the pine trees.  There are always Jays on guard somewhere along the track and Hoopoes can occur all year.  I have noticed in the last two years that there seems to be far more Jays than I have noticed before.  Lovely colourful birds but very difficult to approach and get a good photograph.
Crossbills have also become more common and they are often heard splitting the pine kernels before they are seen. A dead giveaway  that they are there are the husks of the pine seeds floating down through the branches of the trees.
One bird that I always look forwards to seeing is the Spotted Flycatcher Muscicapa striata.  When they arrive in numbers in mid-May, the temperatures are reaching the high 20ºs, and for me that’s summer!  As a teacher at an international school, I know that the holidays are not far away and I can soon take a step back from the demands of getting pupils on course for their future success.  Conversely, the southerly passage of Bee-eaters Merops apiaster and Honey Buzzards Pernis apivorus means “summer over” and back to work soon!  The good thing about work is the birding never stops.  A male Golden Oriole Oriolus oriolus rescued from the art room and a wonderful location that gives a tremendous view over the Rio Verde means there’s always something to see!  Despite the current euro-crisis, Spain’s wildlife might be the one benefactor of the reduction in construction due to the economic crisis.  Incidentally, the Rio Verde here is the site of a large colony of Monarch butterflies Danaus plexippus.
It’s not just the birdlife that one can observe on this walk.  There is much evidence of the nocturnal activity of wild boar, digging up large areas in the search of food.  I have seen Spanish Ibex Capra pyrenaica, Egyptian Mongoose Herpestes ichneumon and Brown Rat Ratttus norvegicus on the walk and have recently put up a couple of camera traps, to capture any night time residents.  Snakes are pretty rare on this walk I only saw two last year one of which was flying at about one hundred metres in altitude!! Prey to a migrating Short-toed Eagle Circaetus gallicus. 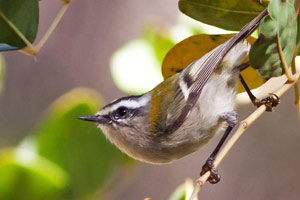 There are many lizards  the Large and Spanish Psammodromus, usually seen scuttling away through the undergrowth.
However, this walk may have a different claim to fame. Orchids, although not numerous, include a very small colony of Ophrys malacitana, the Málaga Dull Ophrys.
These come into flower at the end of November, or the beginning of December, making them some of the earliest flowering orchids (or latest) in the whole of Europe!  At least seven other species of orchid grow here, along with many other species of wildflower, all depending on the winter and spring rains.  Fortunately, the recent destructive fire at the start of September 2012 has left this area untouched but I maybe not so fortunate with my 10x10km square, which is centred around Monda, in which I conduct a common breeding bird survey for the Spanish Ornithological Society (SEO)  But that’s another story.