PJ: Tim, amazingly we go back 37 years and in all that time I don’t think I ever asked ‘what first got you interested in birds?’

TA: Did I say I was interested in birds!?
Guess I am really, but it all started quite by chance actually working with wild birds rather than captive ones. As kid living close to the centre of Bristol, but luckily on the edge of golf course and huge expanse of woods, urban wildlife was always around, although I doubt I would now find a nightjar on a nest 3.5 miles from the heart of the city as I did in 1957!
I did all the things we now frown upon, collected the odd garden bird egg, cut off wings from dead birds, killed poor little butterflies in jars of crushed laurel leaves, but all this was part of learning about how wildlife worked even though some of it was dead!! We didn’t have screens to pore over or Google to search for information, so you learnt about nature in the big dangerous world around one’s home – now forbidden territory sadly for many of today’s kids.
I reared mice, rescued baby jackdaws, kept chickens, even making an early TV appearance on Animal Magic with Jonny Morris with three baby badgers I was hand rearing. But best of all we lived only 40 minutes away from Slimbridge and I was often deposited there by my parents and so a lifelong love of all things wet and wildfowl began. My hero was Peter Scott and in years to come I ended up working for the great man as deputy curator of Slimbridge.
However at this stage in my life I was more interested in aviculture and rearing rare species of wildfowl than actually being involved in wildlife management and wild birds.

PJ: For anyone who knew the area before Rutland Water became the icon for nature reserve development and management, you would have to say the prospects must have been daunting setting up the reserve. How did you approach the task in the early years and what were your immediate priorities?

TA: I came to Rutland in 1975 as the new warden of a wetland reserve with no water; the reservoir and dam were still under construction. A daunting prospect as no-one had ever undertaken the challenge of creating a wetland of this scale anywhere!
The closest example was the Sevenoaks reserve created by the late Geoffrey Harrison and I was lucky to spend a day or two with Geoffrey discussing habitat creation. However, there were many challenges to face aside from having to plant tens of thousands of trees with only a tractor and a dog to help! The area designated for the reserve lay at the western end of the proposed reservoir, which was then still being farmed and was mainly under cereal crops. Planting trees in their wheat didn’t help early relations with the farming community! I started to recruit volunteers and slowly more and more local people became involved several of whom are still to this day part of the reserve volunteering team. Recruiting volunteers with the right skills led to hides being built by carpenters and JCB drivers digging ponds, but my main claim to fame at that time was being always on the lookout for what some contractors saw as waste, but what I saw as essential materials for building a nature reserve.

PJ: Of course many years have passed since you were appointed as warden and later as reserve manager for Rutland Water, what do you see as you’re most important achievement and lasting legacy with your work there?

TA: Perhaps the greatest achievement has been getting so many people involved in conservation in its many different guises.
I started teaching evening classes, organising local and later longer excursions to other wildlife sites and over the years seeing tens of thousands of visitors enjoying the reserve. Taking the reserve from Greenfields to become a Special Site of Scientific Interest, a RAMSAR site and a Special Protection area was equally rewarding and of course bringing ospreys back to England, after an absence of 150 years, was also a massive milestone.
PJ: Since the early beginnings of the Birdfair (1989) it has developed into the largest event of its kind in the world. How much pleasure has the experience of being the foremost architect of the Birdfair given you Tim?
Birdfair has been part of my life for the past 24 years and now seeing Birdfairs spring up around the globe makes me especially proud. With my colleague Martin Davies and a dedicated very small staff we have helped raise awareness of many crucial conservation projects all over the world. I estimate Birdfair has raised and given away in excess of 3 million pounds, but that hardly compares to the 20 plus million that Birdfair monies has raised through match funding for projects in the country. I have been very lucky to be invited to assist at a number of fairs and hopefully helped enthuse others to use this type of event to suit their region and its varied culture to get vital conservation messages across to local people.

PJ: More recently you have become involved in an education project through the auspices of the Osprey Migration Foundation, can you tell us a little more about this programme?

TA: With another colleague Tim Mackrill, who I first recruited as a volunteer working on the osprey project, we realised that here was species with an almost global distribution and enjoys a range of migration routes over many different countries. I have always believed that the conservation message musts start with young people, so I developed the idea of getting kids from each country, over which ospreys migrate, to communicate through modern technology. Setting up education programmes, but with kids where possible taking the lead. Ospreys would be the common factor but I wanted schools to talk to schools about every aspect of their lives and of course where possible to help learn a new language. Tim Mackrill has already been out to the Gambia, and we are receiving encouraging support from Finland to Italy, Israel to Morocco to name but a few countries.

PJ: Finally and I admit to a modicum of self-interest here, this year sees the very first attempt at producing a bird festival that takes its message around to various areas within the Iberian peninsula, the Iberia Bird Festival. We are hoping to introduce the message of conservation and preservation of wildlife through economic benefits to local communities. What advice can you give to help us make the event successful and self-supporting?

TA: I am really looking forward to joining you all at the new Iberia Bird Festival, already as I scroll through Facebook sites or Twitter I feel there is a huge buildup of enthusiasm, which is essential to make a fair successful. My first advice has always been unequivocal, keep it small do not try and emulate the Rutland Birdfair, we have been around the block and back. Involve local communities; start with a local conservation initiative where by local wildlife benefits and local people can see a positive outcome. But most of all enjoy a great weekend! 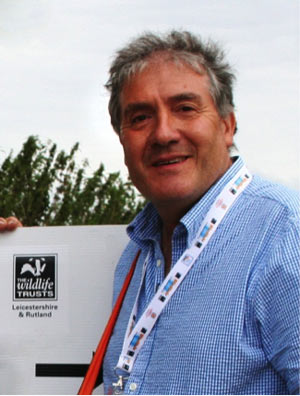 Tim Appleton was deputy curator at Slimbridge before becoming the Reserve Manager at Rutland Water Nature Reserve.  For the past 35 years, he has been responsible for the creation and development of this outstanding inland reserve. It is now a SSSI, Ramsar site and SPA

Tim has had a life-long interest in birds, especially wetland species.  This interest has taken him to almost all corners of the globe, to both watch and study birds.

Co-founder of the British Birdwatching Fair Tim also leads wildlife holidays all over the world.  Tim was the originator of the translocation project of Osprey to England from Scotland.  Vice-president of the BOU, received the Christopher Cadbury medal for Nature Conservation in 1999 and was awarded an honorary degree – Master of Science – by University of Leicester in recognition of contribution to wildlife conservation and in 2004 Tim was awarded the MBE.