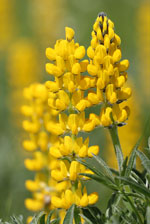 Over the years I have visited the Serranía de Ronda many times through the early spring and summer months in pursuit of my main interest which is butterflies. Hand in hand with this goes the wealth of bird and plant life this area offers, along with the stunning landscapes that adorn this region.There are many things that keep drawing me back to this area, not only my love of butterflies, but the scenery, the quiet, and the friendly people. The weather on the whole is reliable and the light fantastic for my photography. Not many drawbacks, and some great memories!

As soon as the new year ticks over, look out for the Large Tortoiseshell butterfly, in any area with Cork Oaks. Large in size, it is a rusty marmalade orange with black and blue markings. It reappears from January onwards from its winter hibernation. It is a powerful flier, though it’s most likely to be seen basking on bare earth or small rocks.
The Provencal Hairstreak, is a much smaller butterfly that can be seen at ground level flying in between scrub, on low turf, or around flowers like Iris, and Purple Bugloss. It has a restricted range, found only in Iberia and is the size of a thumbnail. It has brown upper wings and striking orange and green undersides. 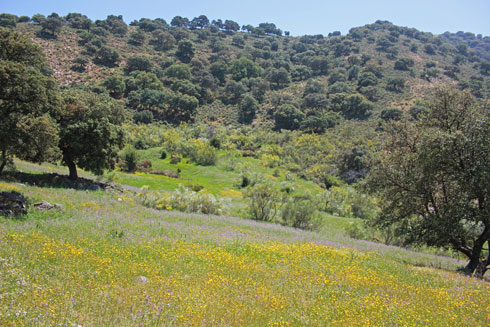 As the days start to lengthen the rocky hills, farmland and roadside verges explode into a carpet of colours. April and May are probably the peak of the spring exuberance, but from February through to late June, when the heat has baked the ground, you will be amazed by the wonderful display of colours. One of my favourite memories was a field full of fresh Yellow Bee Orchids at the start of May, which was down by the railway line on the outskirts of San Roque. A dry footpath yielded a fast-flying Mediterranean Skipper, so easy to lose in flight!  Catching the train, your eyes will be drawn to the amazing number of White Storks, which have their nests on just about every post or perching point, for a few kilometres. 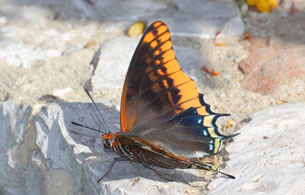 More species emerge through April into early May, encouraged by the rapid growth of the food plants and a ready supply of nectar. Black-veined Whites hog the thistle heads and local species like the Lorquin’s, False Baton and Panoptes Blues all fly in the rocky, dry habitat adorned with flowers. The Lorquin’s Blue is an interesting species. It is restricted to the southern parts of Spain and Portugal. Small in size it has violet-blue upper wings with a distinct black marginal border.

Walking along the country tracks the elusive Golden Oriole is heard but not seen and the numbers of returning Bee Eaters are building up. A splendid dash of colour is added by the Spanish Festoon butterfly. It is chequered yellow/cream with red and black markings, and it’s possible to find them all year in southern Spain. Even more common is the Spanish Fritillary, orange/ brick red colour in appearance. By May time this species can be abundant, especially in areas where the flowering Cistus is present. 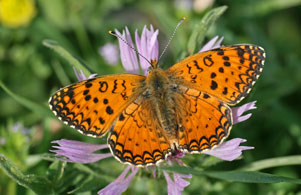 Harder to find is the Aetherie Fritillary. A local butterfly, it flies in fields scattered with yellow daises and its main food plant, the Knapweed. Heading out from the village of Benaoján, there is a great walk across the mountainous hills with superb scenery. Here I’ve always found this Fritillary but its flight period, as with many species, is not fixed to certain dates. The male has deep orange upper wings with black markings. Look out for the female, much duller orange with some greyish suffusion.
By the end of May a lot of blue species are on the wing and the numbers of ‘typical’ Mediterranean blues like Lang’s Short -tailed and Long -tailed are on the increase. Seen most frequently on cultivated areas, with the Long-tailed Blue being fond of ‘mud puddling’ on damp patches of earth.

With the heat building through the early summer months so do the species of butterflies. A great area to look around are the lower regions of the Sierra de Las Nieves. This impressive natural park has benefited from very little human activity and so tends to be rich in flora and fauna. In early June here the butterflies are abundant; from Red Underwing Skippers feeding on the Bellis, to the huge Cardinal Fritillary. The upper wings of this species are tinged with green while the undersides display a distinct peachy pink/red patch. They love thistle heads for a nectar source and can be really numerous here at this time.

The train ride down the line towards the coast is a rewarding experience. Not only do you see so much as you pass through the countryside with scattered ’white’ villages, it also offers you the chance to jump out at one of these places and explore. Jimena de la Frontera is one of the places I tend to spend time. It’s a picturesque village with lots of places to investigate the countryside, surrounded by Cork Oaks and towering Eucalyptus trees. One of the tracks leads me through some superb countryside with fields of rather ’big’ bulls on either side; coming to a turn, a Bee eater colony are nesting on a side bank. Here I watch under a tree with great excitement at their comings and goings.

Stonechats and Corn Buntings are guarding their posts as I walk along and only disperse as I reach them. This being a bit nearer the coast increases the chances of finding the powerful Two-tailed Pasha butterfly, with its flashy orange and brown colouration. It is an impressive sight. It will often find you if you are eating in its area, being strongly attracted to the smells of fruit and alcohol. But the main food plant for this fast flier is the Strawberry Tree (Arbutus unedo). 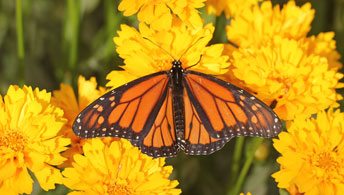 Widely acclaimed for their amazing feats of migration, Monarch butterflies are present here. A delicious deep marmalade orange with black markings, its large size makes it look like a bird above you. If you are lucky you may encounter this species feeding from flowers in cultivated areas, as it survives here in isolated colonies.

There are many things that keep drawing me back to this area, not only my love of butterflies, but the scenery, the quiet, and the friendly people. The weather on the whole is reliable and the light fantastic for my photography. Not many drawbacks, and some great memories!