Twelve years ago when we moved to Spain, like all good ornithologists, we set out to feed the birds and entice them within easy viewing distance. We failed miserably. Spanish birds are not attracted by peanut cages, seed feeders or fat balls; at least here they are not. We had a problem. 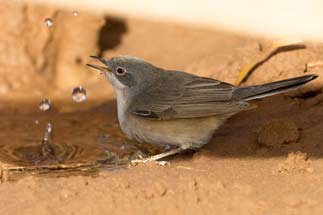 literally, was water. Neither we, nor the birds can live without it.
We now have a large shallow dish we used to stand enormous flowerpots in which we keep topped up daily. Initially sited unsuccessfully near the house but subsequently moved 40 metres away, it provides us with hours of enjoyment as the birds drink and bathe. Visiting birders are thrilled to see a Blue Rock Thrush, one of the regulars, so close.

But what can we do about food?
Our garden is a wild tangle of bushes and shrubs which attract large numbers of Sardinian Warblers in June and July, why? The answer was on hand, literally as I ringed the birds my fingers were turning purple from their droppings. Oh the joys of bird ringing!

It required little detective work to realise it was juice from the berries they had eaten. We have two prolific berry bearing shrubs on the plot, Pistacia lentiscus, the Mastic Tree, due to its sticky sap, which normally fruits in June and July depending on springtime temperatures and Pistacia terebinthus The Turpentine Tree, (smell the sap), which fruits in the autumn. Both have clusters of berries which are eventually purple when ripe, not unlike the Elderberries we picked for wine when in England.  By encouraging both shrubs to expand by the removal of Gorse and wild Olives, a feast awaits, both in the summer for the breeding birds and in the autumn when Blackcaps, Black Redstarts and numerous other migrating species avail themselves of the fruits. But there is a bonus for them from P. terebinthus, which has another slang name of “The Ram’s Horn Bush” due to the numerous large ram´s horn shaped galls which form on it as a result of insect attack. At the end of October and early November, the insects which have been developing within the galls start to emerge and fly. 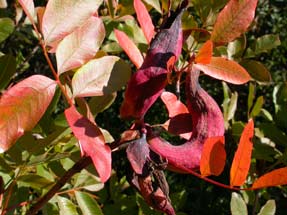 During the last week of October I sat on our terrace and watched 20 plus passerines frantically hawking as the clouds of insects emerged, while just above 52 Crag Martins swooped backwards and forwards over the bush, snapping up what was missed by the birds below.

So, if you want birds in your Spanish garden provide fresh water and plant some Pistacia bushes. Oh and if any entomologist can help me identify the insects causing the galls I would welcome some help please. I am stumped.