Living on the southwest coast in Andalucia certainly has its advantages when you want to go out birding. It doesn’t matter which month you step outside and search across the coastline or valleys of the sierras that almost tumble into the Mediterranean Sea or Atlantic Ocean, there’s always something to see. In springtime we eagerly await the return of our Eagles, Falcons, Harriers and other birds of prey without really thinking of some of the problems they face when it comes to having a successful breeding season.

Birds of prey, or raptors as they are often called, range from the mighty resident Griffon Vulture with over two meters wingspan, to the sleek migrant falcon like the stunning Lesser Kestrel with a wingspan of around 65 cms – a real little and large comparison.

Global warming brings a noticeable change and effect, not only with breeding migrant birds but all other living creatures as well. We are certainly seeing and recording a slight change with earlier arrivals of some raptors during their return to Europe. Here they use the ancient pathways such as the Strait of Gibraltar, the most western European crossover route between the two continents. Taking note of when some species start arriving back in this area, is a useful tool where comparison of annual records can show changing migration patterns. There is of course a link caused by a rise in temperature which itself effects the way all species function especially where the traditional eruption of food sources is timed with breeding, particularly hatching timing. The change may be small but already we are seeing differences in bird numbers and their earlier arrival. This change can cause a certain disturbance to the normal equilibrium of migrants. Let’s stay with the Lesser Kestrels as an example. Lesser Kestrels are migrants that winter in North Africa leaving Europe in August and September each year, to return to breed mainly in the Mediterranean countries of Europe from late February onwards. (There are also eastern European birds that nest in other countries, wintering in other southern parts and some juveniles do stay on in Europe during the winter months if there is sufficient food supply and fair weather.) Spain has probably the largest population of Lesser Kestrels in the world. Earlier migrants can have the pick of nest sites and territories where they will collect food, mainly insects, for their broods. A few days later and the arrival of more of the same species to the same area can cause confusion, stress and the inability to find appropriate nest sites.

Another Problem Awaits – Lack of Nest Sites
The Lesser Kestrel (Falco naumanni) is one of the most endangered bird species in Europe, having undergone a dramatic decline across its breeding range over the last four decades.
During the last twenty years, the number of people who have moved to the warmer south to live has increased greatly, and this has had a detrimental effect on the availability of nest sites for just one communal breeding species, the Lesser Kestrel! I live in the countryside and have seen the conversions, renovations and new buildings go up in nearby white villages of Vejer de La Frontera, Medina Sidonia and Alcala de Los Gazules.

Part of the problem is that people of course, want to live in the numerous white villages or ‘Pueblos Blancos’ dotted around southern Spain. They look so appealing and the way of life is something of a dream for lots of ‘Northerners’. They are without doubt extremely attractive and some people have pulled out all the stops, renovating and updating the antiquated electrics, ancient water and sanitation problems, creating a dream home in the sun. The problem for our feathered friends means that on their return to Europe, they find that traditional nesting sites, such as crack in the red pan-tiled roofs and old stone walls have been renovated, sealed and painted over. Most of the owners are unaware of this effect and although they may have seen or heard the birds flying around don’t appreciate their plight.

What Can Be Done? 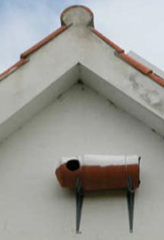 The Castro Verde experience showed that natural nests were sometimes abandoned in favour of the ones provided: this suggests that some of the artificial nest sites might be of higher quality than natural nest sites, affording better protection against potential predators and inclement weather, and reducing inter-specific competition for previously limited, nest-sites.
To take a leaf from this great Portuguese project that has been extremely successful over the last years at Castro Verde, we can all ask those foreigners in the white villages to mount an artificial nest box for Lesser Kestrels on the roofs and eaves of newly renovated properties. Nest boxes or containers can be made from wood and there are various designs and plans available on the internet. I personally like the terracotta pots, specifically made for Lesser Kestrels but have yet to look around to see where I could order a batch and find out cost. They stay relatively cool during warm weather and provide better security against insects or other parasites or predators. 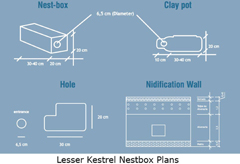 How And Where To Put The Nest Boxes?
– On vertical walls less exposed to the full sun
– Mounting should be at least 3m in height from the ground
– Leave at least 1m between the closest nest
– The entrance hole should be no greater than 6.5 cm in diameter

Perhaps we could all get together and erect boxes ourselves. Let me know if our readers have any thoughts on the matter.