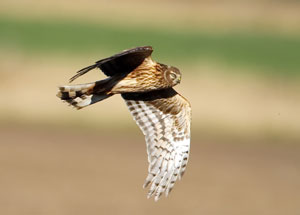 In the UK, we tend to moan about the excesses of bird-killing, much of it illegal, that occur in Mediterranean countries. We ‘tut tut!’ about bird-liming in Cyprus, spring hunting in Malta and southwest France, and bird-trapping in Italy and Spain.  However, we have our own shameful case study of illegal bird-killing involving fully-protected birds of prey; most particularly Hen Harriers, Golden Eagles, Peregrine Falcons and Goshawks.
Birds of prey have had full legal protection in the UK since the government of Winston Churchill introduced the Protection of Birds Act in June 1954 – and yet there are fewer Hen Harriers nesting in England this year than there were in the year they were ‘protected’.  Why is this?
Hen Harriers, and other raptors, are in conflict with a traditional field ‘sport’ – driven grouse shooting – which is a peculiarly British pursuit (although it doesn’t actually involve any running around).  Raptors eat Red Grouse that others want to shoot for fun, and the Hen Harriers don’t pay the thousands of pounds (or euros) which human hunters will pay for a day shooting the fast-flying Red Grouse.

Red Grouse are the British race of the very widespread Willow Ptarmigan. They live in upland areas of poor soils, and mainly eat the shoots and leaves of the ericaceous shrub, heather Calluna vulgaris.  The heather is burned deliberately on a rotation of around seven years to create a mixture of young heather (the best food) and old heather (best for nesting cover).
Anything that can eat the Red Grouse before the opening of the grouse shooting season, named the ‘Glorious Twelfth’ on 12 August, and which can be killed legally is ruthlessly despatched; Red Foxes, Stoats, Carrion Crows are the main species and are killed in their thousands every year on the 147 grouse moors in northern England.  Such management produces very high densities of Red Grouse – at around 100 times their natural densities in the absence of such management.  Medicated grit is also provided for the grouse to eat to rid them of nematode parasites.   These are wild birds, they are not reared or released, but their high numbers are a result of very intensive management which amounts to them being farmed.  The management is implemented by ‘gamekeepers’ employed specifically for this purpose. 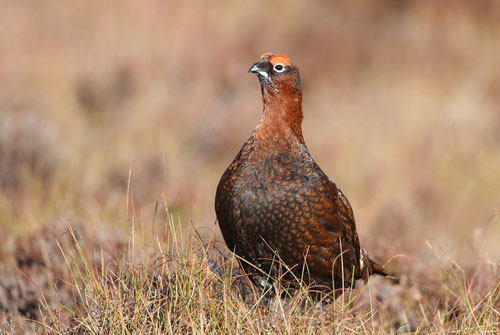 Since the advent of the breach-loading shotgun in the mid nineteenth century it has been possible to fire several shots in rapid succession at these birds and because they fly fast and low, and in tight flocks when flushed by a line of people who ‘drive’ the birds across the hillsides towards a line of ‘guns’ hidden in a line of shelters known as ‘grouse butts’, this form of hunting is highly prized.
As well as the thousands of predators that are legally killed annually on English grouse moors so are protected species too, including raptor species of which the Hen Harrier is the most hated by many involved in grouse shooting.  Although Hen Harriers have full legal protection it is difficult for the law to be implemented in the remote hills where Red Grouse and Hen Harriers live.  All it takes is for a dawn visit to a Hen Harrier nest by a gamekeeper for the pair to fail and the female to be shot.  Increasingly we believe that groups of men visit Hen Harrier winter roost to shoot them too.
There are very few successful prosecutions against this form of illegal persecution but the evidence is pretty clear about what is happening – in fact the situation is blatant! There should, according to the scientists and according to the UK government, be c2500 pairs of Hen Harriers in the UK as a whole but c1600 of them are missing from the hills and mountains where they should live. And almost all of those are missing from those areas of the country dominated by the land use of driven grouse shooting.  In England (an arbitrary boundary in ecological terms – but a real one in political terms) there should be an estimated 330 pairs of Hen Harrier and this year there are just three pairs – around 1% of the number the available habitat could support in the absence of criminal activity.  99% of our Hen Harriers are missing!  Nobody except those involved with grouse shooting has any motive to kill this bird.  You see what I mean by it being a shameful case study of illegal bird-killing?
This year is a better year than last – then there were just two pairs of Hen Harriers nesting, both unsuccessfully, in England.  Scientists have shown that Peregrine Falcons are at low densities and breed with low success on areas dominated by grouse shooting too. We should have many more Golden Eagles in the UK too – but they are absent from areas dominated by grouse shooting, and eagles have often been found poisoned on grouse moors.
Hen Harriers (and Golden Eagles, and Peregrines, and Goshawks, and Foxes, and Stoats, and Carrion Crows and many other things) do eat Red Grouse – they have done so for thousands and thousands of years. Red Grouse and their predators have got by, obviously, long before a technological advance in firearms, and a rise in living standards, allowed shooting of this kind to be an expensive hobby for the rich.  These birds of prey are killed solely because they are a problem for a rich person’s sport.

Mark Avery is a scientist by training and a naturalist by inclination.  He now writes for a living and campaigns for nature as a passion.  He writes a daily blog, Standing up for Nature, about UK conservation issues at www.markavery.info/blog/ .  His book on UK nature conservation, Fighting for Birds was published in 2012 and his next book, about the extinction of the Passenger Pigeon in north America is published in July 2014 and entitled A Message from Martha: the extinction of the Passenger Pigeon and its relevance today.