Vested interests mean wild birds are being blamed for the spread of avian flu, argues Dr Leon Bennun, whereas responsibility really lies with modern farming. Demands for culling and the destruction of nesting sites threaten, he says, to bring rare species to extinction, but will do nothing to halt the disease.

During the second week in February 2006, Western Europe reported its first cases of the highly pathogenic H5N1 strain of avian flu in wild birds.
Across Italy, Greece and Slovenia, more than 25 mute swans died; by Valentine’s Day, the virus had also been found in wild swans in Austria and Germany.
Conservationists, poultry keepers and health officials were bracing themselves for more widespread outbreaks.
Fuelled in part by alarmist press reports and by the attempts of government agencies to draw blame away from farming, there are now calls for drastic measures against wild bird populations.
We believe such measures would put some species at risk of extinction, without having any effect on the spread of avian flu.

The likelihood is that the swans that had died in Western Europe had recently arrived from the Black Sea, driven south and west by freezing conditions that prevented them feeding.
They may have caught the disease from other wild birds; but this is unlikely given the tens of thousands of waterfowl that have tested negative for H5N1 over the last decade.
Much more likely is that before starting out, they picked up the virus from farms, either from infected poultry or their faeces. Mute swans often graze agricultural fields, and are likely to have come into contact with poultry manure spread as a fertiliser.
If wild birds had been spreading the disease across continents there would have been trails of outbreaks following migration routes; but this hasn’t happened.
The “wild bird” theory for the spread of H5N1 also provides no explanation as to why certain countries on flight paths of birds from Asia remain flu-free, whilst their neighbours suffer repeated infections.
What is striking is that countries like Japan and South Korea, which imposed strict controls on the import and movement of domestic poultry after initial outbreaks, have suffered no further infections. Myanmar has never had an outbreak.
In fact, countries which have not yet developed a large-scale intensive poultry industry have also been largely spared. The UN Food and Agriculture Organization (FAO) reports that in Laos, 42 out of 45 outbreaks affected intensive poultry units. 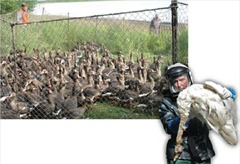 Highly pathogenic avian influenza viruses are very rare in wild birds.
But in intensively farmed poultry, the high density of birds and constant exposure to faeces, saliva and other secretions provide ideal conditions for the replication, mutation, recombination and selection through which highly lethal forms can evolve.
Add to this repeated misdiagnosis, industry and government cover-ups, and panic selling or processing of potentially infected birds, and we have the explanation for why H5N1 is now endemic in parts of South-East Asia.
Factor in the global nature of the poultry industry, and the international movement of live poultry and poultry products both before and after the Asian outbreaks, and we have the most plausible mechanism for the spread of the virus between places which are not connected by the flyways of migratory birds.
The timing and pattern of outbreaks has been largely inconsistent with wild bird movements; but they have often followed major trade routes.
The view that poultry movements have played a major role in the spread of the disease is supported by an analysis of viral strains recently published in the US journal Proceedings of the National Academy of Sciences.
Some of the agencies attempting to monitor and control avian flu, such as the FAO, seem to have been reluctant to draw attention to the role of intensive agriculture, because of the impact on national economies and on access to cheap sources of protein.

Senseless destruction
For this and other reasons, the role of migratory wild birds in the transmission of the disease has been exaggerated, and further sensationalised in the press.
In some countries there has been a backlash against bird conservation, leading to calls for the culling of whole populations, draining of wetlands and destruction of nesting sites.
In fact, H5N1 outbreaks in wild birds have so far mostly burned themselves out without culls or other human interventions.
Some of the world’s most threatened birds may be put at risk. But there is also the near-certainty of damage to ecosystem services on which people and economies depend.
Alarmingly for those who fear a human bird flu epidemic, such a distorted picture also means that the right questions are not being asked, and the most effective protection measures may not be undertaken.
BirdLife called for an independent inquiry into the spread of H5N1 which gives due weight to the role of the global poultry industry, and maps both official and unofficial poultry trade routes against the pattern of outbreaks.
It may also be time to take a long, hard look at the way the world feeds itself, and to decide whether the price paid for modern farming in terms of risks to human health and the Earth’s biodiversity is too high.

Dr Leon Bennun is Director of Science, Policy and Information for BirdLife International.