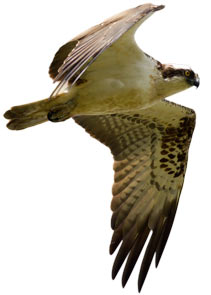 There is no doubt that Andalucía is one of the best places to watch bird migration anywhere in the world. The sight of thousands of migrant raptors and storks heading across the Strait of Gibraltar is a sheer thrill. Having reached European airspace for the first time in the spring, many thousands of Honey Buzzards, Black Kites, Short-toed Eagles and Booted Eagles continue northwards towards their breeding grounds in western Europe. And among the millions of birds passing over Tarifa and other watch points along the coast, are Ospreys.
Historically speaking Ospreys have had a difficult time in Europe. Persecution, habitat loss and DDT combined to eradicate these charismatic birds from much of their former range. Thankfully, though, things are now really starting to look up. Thanks to concerted and proactive conservation effort – erection of artificial nests in many countries, most notably in Finland and Scotland and re-introduction projects in England, Spain, Italy and now Portugal, Ospreys have been restored to areas where they have been absent for many decades. And not only that. They’re now linking people throughout the world.
Of all our migrant raptors, the migration of Ospreys is perhaps the best understood. Having spent almost six months on the west coast of Africa – anywhere from the Ivory Coast to southern Mauritania – adult Ospreys begin their long flight back to their breeding grounds in early March. The first obstacle they must overcome is the vast and unforgiving Sahara; not somewhere to linger if you only eat fish. 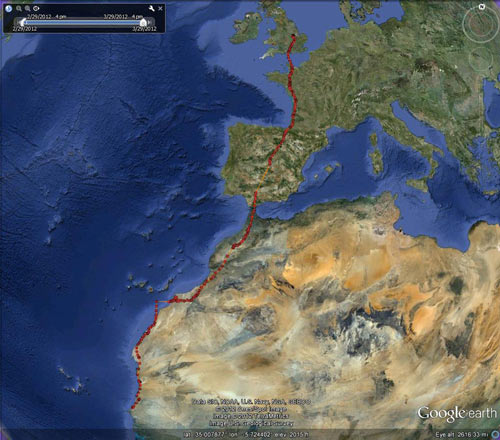 The birds know this and satellite-tracking research has shown that, on average, most Ospreys fly 100 miles per day further across the desert than they do once they reach Europe. It takes an experienced adult Osprey three or four days to cross the desert; the flight path taking most birds through Mauritania, Western Sahara and then onwards into Morocco. Although the birds sometimes continue flying after dark, most roost on the desert floor at night; making them vulnerable from surprise attacks from Jackals, Eagle Owls and other predators. Having reached Morocco, satellite tracking has shown that most birds skirt around the vast Atlas Mountains; why fly over peaks of more than 12,000 feet, when you can simply fly round them? They then head north over Marrakesh and on towards the Strait. 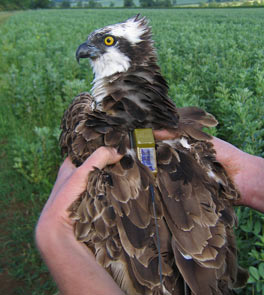 Stand on any of the migration watch points in Andalucía and one thing you’ll notice when you see passing Ospreys, is that they always fly alone. Whereas it’s not uncommon to see big flocks of Black Kites and Honey Buzzards migrating together, Ospreys are always on their own. Even juvenile birds, heading south for the first time in the autumn, don’t follow adult birds. Their 3000 mile journey is driven entirely by instinct. And that’s not the only way that Osprey migration differs from many of the other raptors who migrate through Andalucía each spring. Most birds of prey require thermals to help them on their way. As a result, they actively avoid long sea crossing; and it is this that explains why the Andalucía ‘bottleneck’ attracts so many birds. In contrast, satellite-tracking research has shown that Ospreys can make much longer flights directly across the sea. Several Scottish birds, satellite-tagged by Roy Dennis, have flown direct across the Bay of Biscay and others have crossed the Atlantic direct from Portugal to Morocco, missing Spain completely.  Such flights are not only real feats of endurance but the birds often undertake them at night.

Another example of a superb night-time migration came in March 2012 when an Osprey from Rutland Water was making his spring migration back to his English nest. The bird, known as 09(98) had already endured a tough northward journey. Vicious easterly winds had driven 09 across the Atlantic off the coast of Western Sahara and it wasn’t until he had been blown half way to the Canary Islands before he managed to reorientation himself. It took him until 5:30am the next day to reach land again. Next day 09 was clearly exhausted by his brush with death and he only managed to fly another 10 miles. He was soon back on track, but by the time he reached southern Spain he knew he still needed to make up time; if he was too late back to his nest then a rival male may have a chance to oust him. At 7pm on 21st March, 09 was resting in central Andalucía, about 35 miles south-west of Seville. Under normal circumstances 09 would have settled there for the night, but on this occasion he had other ideas. An hour later he was heading purposefully north again. He continued flying through the night, crossing the Sierra Morena mountain range before settling to rest just south of Madrid at 5am having flown another 225 miles in almost complete darkness: a waning crescent meant there wasn’t even any moonlight to guide him through the mountains. We don’t know exactly how 09 was navigating that night, but his GPS transmitter was helping us to understand what master migrators Ospreys are.
Once through Spain, most Ospreys are within striking distance of home. Birds from Rutland Water often return to their nests on the same day each year. And that’s exactly what 09’s night-time flight through Spain in 2011 helped him to do. He dropped onto his Rutland nest shortly after 2pm on 28th March – the same time, almost to the minute, as the previous spring. 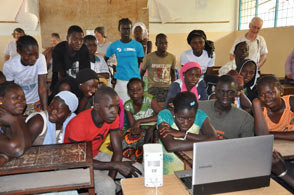 The migration journeys of Ospreys like 09 are an important reminder that conservation of migratory birds is crucial across their entire range. At Rutland Water we have successfully re-established a population of Ospreys in central England for the first time in over 150 years, but our satellite tracking research has helped us to develop a new and exciting element to the project that, potentially, has a legacy much further afield. Following a month-long field visit to West Africa in 2011, myself and the Rutland team initiated a project to link schools along the Osprey migration flyway. It is a concept that Tim Appleton first thought up more than ten years ago when we tagged Ospreys from Rutland Water for the first time, but the visit to West Africa in 2011 gave the project new impetus. After visits to several Gambia schools during our month-long trip, it was clear to us that birds like Ospreys provide a unique way to link people around the world, and to teach children about bird migration.  With this in mind we are piloting a project in five Gambian schools where a local bird guide takes the students out on fieldtrips, and teaches them about bird migration. 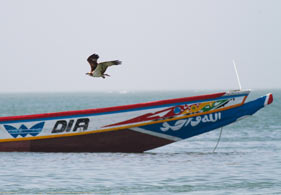 Ospreys are the flagship species, but we hope that the project will inspire the students to take more of an interest in the natural world. To help emphasize the journey that birds like Ospreys make each year, we have linked the Gambian schools with schools in the UK. This has not only helped the students to develop their knowledge of migratory birds, but also to learn about another country and culture. We are now working to extend this project to other parts of the migratory flyway – not only between the UK and West Africa, but also along the eastern flyway between Finland and Africa and also between North and South America. The global distribution of Ospreys makes them the perfect species for such a project. They are birds that can inspire people to take an interest in the natural world and we hope that the journeys of individual birds, such as 09, will do just that.

Tim Mackrill is an ABS member and manages the Rutland Osprey Project for the Leicestershire and Rutland Wildlife Trust. His first involvement with the project was as a fifteen year-old volunteer in 1997 and he was employed as a member of the project team during university holidays while he completed a degree in Ecology at the University of East Anglia. After graduating, Tim returned to Rutland and had been managing the project since 2006. He is also carrying out a PhD on Ospreys in conjunction with Leicester University.