About the Author: Ceri Levy – is a documentary film maker, writer and producer who is best known for the documentary film Bananaz about the band Gorillaz. Ceri is at present working on a film about the way birds inspire and affect people. It’s title is The Bird Effect. He recently published Extinct Boids with Ralph Steadman. Ceri is an ABS – Member

When I first started making my documentary The Bird Effect I set out to make a short amusing film about a strange pastime I had discovered called bird watching. I had gone to the Isles of Scilly with my wife for a holiday one October, and one day whilst out walking we stopped and looked at this little bird hopping in a tree in front of us. I had no idea what it was but it was a pretty enough creature. 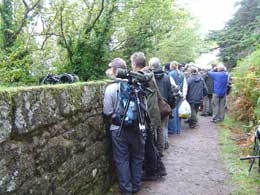 Then before we knew what had happened we were surrounded, and then removed from the scene by a group of people with tripods, cameras and binoculars. “It’s here!” Within seconds we were at the very back of the group of pushy people and we distanced ourselves even further. We had heard about these people… the locals had warned us. This army descended upon the islands every October; apparently these were twitchers! (I would discover the difference between a twitcher and a birder at a later date.) We asked one of the slightly less excitable members of the group what the bird was. A something something war ball. We walked away none the wiser and I took a photo of the group as a memory. I later discovered that it was in fact a Blackpoll Warbler.
Since that day, I started filming birdwatchers watching birds and then became more and more interested in the birds themselves.
The more I learned about them the more I became interested in conservation issues and when I heard the writer, Margaret Atwood, talking about the problems that birds face today I became converted to wanting to help in any way possible. Soon I was following many different stories and one subject kept reappearing before my eyes. Hunting.
I discovered that in the UK we are in the middle of one the worst periods for the persecution of birds of prey in over 50 years. 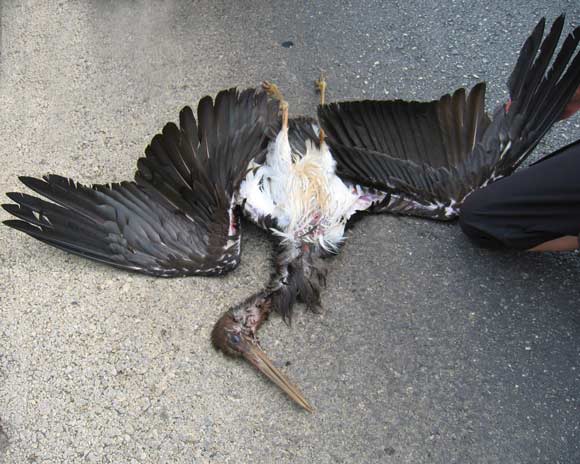 Then I discovered Malta and the illegal hunting of migratory species that happens there. I decided to go and investigate and see the situation for myself. I took part in BirdLife Malta’s autumn Raptor Camp and then went back the following spring for their Spring Watch Camp to be a part of a team that watches for illegal hunting activity on the island. What I discovered was horrifying to say the least. What we run to see, many Maltese hunters run to shoot. Amongst the birds I saw shot, or lying dead were Eleonora’s Falcons, Black Storks, White Storks, Kestrels, Marsh Harriers, Bee-Eaters, Hoopoes, Night Herons, Little Bitterns, Swallows… The list grew and grew and my distaste, horror and mistrust of hunters and their sport did likewise.
There are between 10-15,000 hunters on Malta, an island that is only 23kms long. This equates to approx. 46 hunters per square kilometre. What chance do birds have of surviving as they migrate across such hostile terrain? The worst moment came for me as I delighted in watching a Lesser Spotted Eagle flying over and around us searching for a place to roost for the night. For an hour or so the team I was part of marvelled at this beautiful creature as it circled over us. This was only my second day out, the first time I had ever seen this bird and I got lost in the birdwatching aspect of the afternoon. As the light faded so the bird got lower and lower and at the last light of day it flew into a tree disappearing into darkness. We all felt a relief come over us as the bird went to roost. 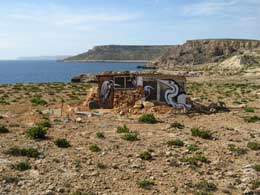 Then fourteen shots rang out in the twilight. And in that moment we knew the bird was dead. Shot emphatically. Car lights in the distance glowed as the hunters left the scene of the crime, too dark to gain any evidence of the perpetrators of the crime.
This was a shocking glimpse of the deviant reality of the situation on Malta. Since then I have vowed to help as much as I possibly can. But we need to be aware that hunters are prevalent all over the world and we can all do something wherever we live, whether in the UK or elsewhere in continental Europe. As a form of protest, the artist Lucy McLauchlan painted birds on an illegal trapping hide.
I would have loved to see the hunter’s face when he turned up the next morning. I have heard plenty of stories emanating from Spain of illegal activities, from trapping and hunting to lime sticking. As birdwatchers all we can do is be vigilant and report anything illegal or suspicious to the relevant authorities. After all what would a world without birds be like? Unthinkable?

Having written a book with the artist Ralph Steadman, entitled Extinct Boids, which is a look at the world of bird extinction, I know this is a subject that looms large in many species’ lives. But what surprises me the most is that we haven’t learned from previous mistakes and we are losing more and more creatures. There are 197 critically endangered bird species in the world today and in the last thirty years we have lost 21 species. Compare this to what is considered as the natural rate of extinction; one species per hundred years and it is obvious that we have a major problem on our hands. There are many reasons for these losses including habitat change or destruction, introduced species, which predate native birds, and of course hunting. We can all do something to help our birds and just by doing what we do as birdwatchers can make a great difference. Use your binoculars and look. It is as simple as that. See a problem and report it to the relevant authorities. If only every birder considered what a world without birds would be like and took action because of this thought then more illegal activity would be halted and with luck more birds would survive for us to wonder at. As a debt of gratitude for the enjoyment they give us, we owe it to the birds to keep an eye out for them. We must never stop watching.