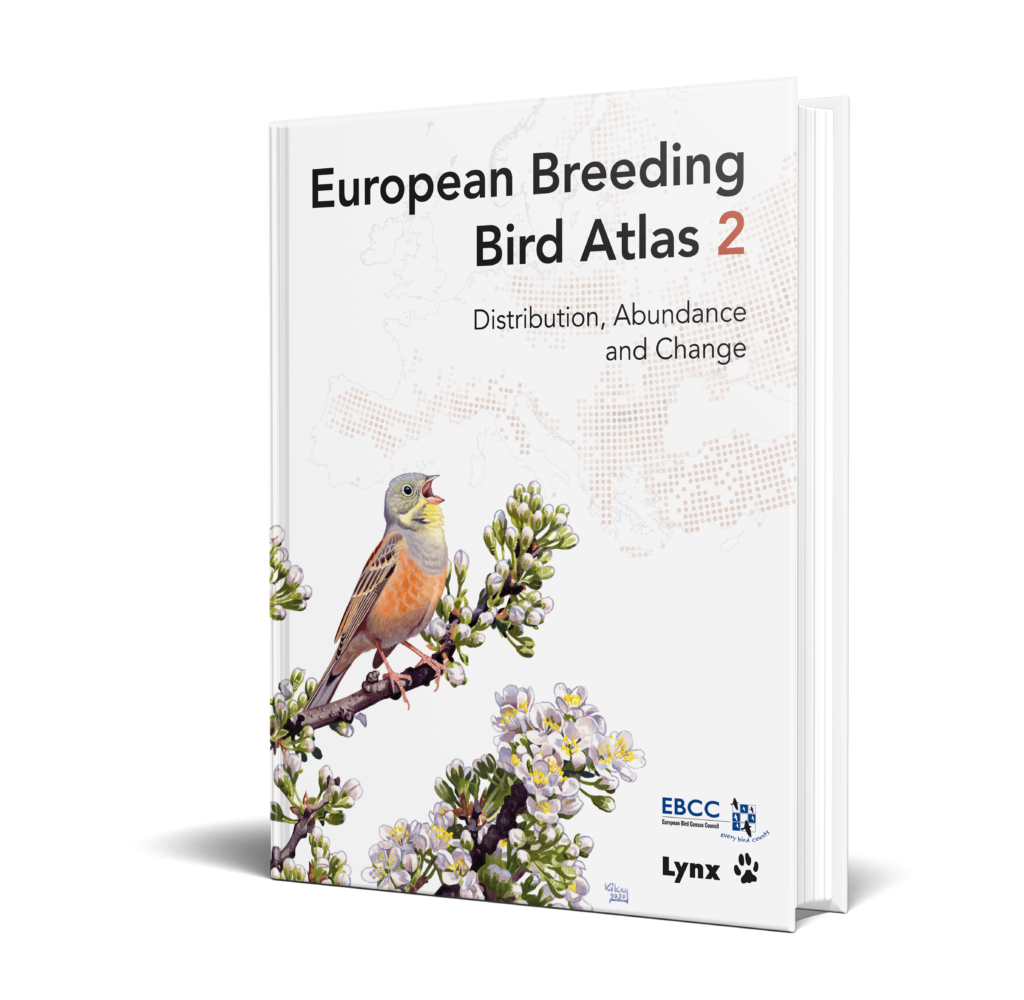 Every few years a bird book comes along that threatens to exhaust superlatives.  Despite the manifold worries that 2020 has brought, it will go down in the history of ornithological publishing as being one of the few years that gave us two such works; “All the Birds of the World” and, the subject of this review, the “European Breeding Bird Atlas 2”.  It comes as no surprise that both are products of the Spanish publisher Lynx Ediciones which is now, arguably, the world’s premier ornithological publisher.  The first atlas to European breeding birds was the pioneering “Atlas of European Birds” (1960) by Karel Voous (which covered 419 species giving a map of the world distribution for each). This was followed in 1982 by Colin Harrison’s “An Atlas of the Birds of the Western Palearctic” which, as the name suggests, covered a larger area including Turkey and North Africa (and hence the higher total, 673, of species treated).  However, both of these works depended on a network of correspondents rather than detailed survey work.  This significant weakness was remedied by the “EBCC Atlas of European Breeding Birds” (1997) which was almost entirely the result of fieldwork across Europe (including the Atlantic islands and Transcaucasia). However, in large areas of central Russia coverage was lacking and there the suggested distribution was a matter educated guesswork.  This work set a significant and important benchmark in European ornithology.

A generation later comes this new survey-based atlas which not only maps the current distribution of European birds but also reflects on the changes that have taken place since the first such atlas appeared.  However, such has been a development of ornithology since the 1990s that not only are European Russia and former Russian dependencies covered by survey-based information but so too are Turkey and Cyprus.  This has, naturally, meant a rise in the number of species fully treated from 495 to 556 (plus 69 further species in an appendix) which has meant a larger book (page size is slightly greater but the number of pages has risen from 904 to 998).

Reading the fifty-page introduction and surveying the text of the new atlas, it is clear that the task of distilling so much information even into such a large book was a daunting one. The introduction explains in detail the factors influencing distribution, a wealth of useful information on how the interpret the maps and the methodologies used (with caveats) to produce them. The latter can be a little too technical and indigestible for the lay-reader but is none-the-less important in setting the context in understanding the maps. It also contains a valuable short primer on the habitats found in Europe. 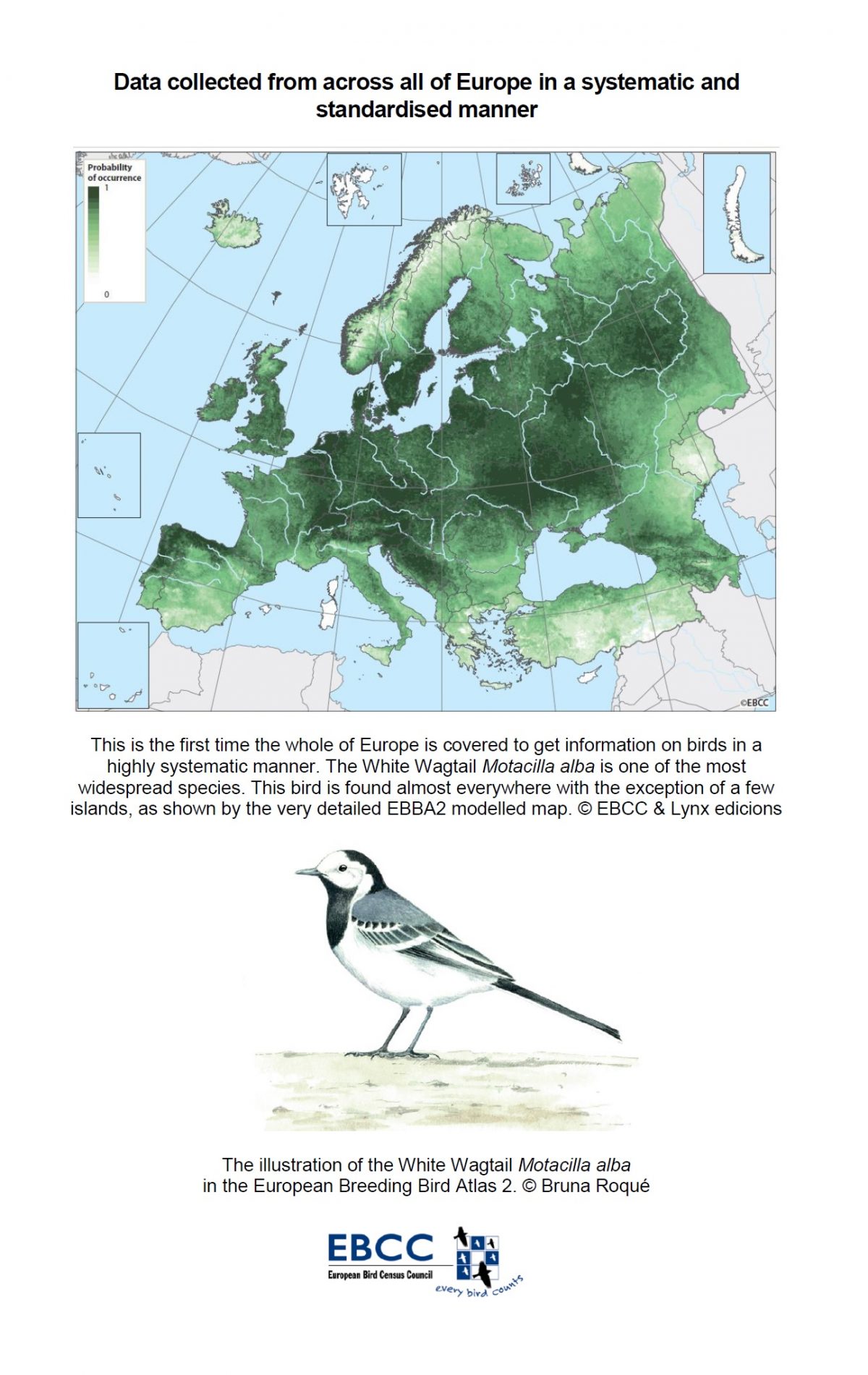 All species have a large-scale map, based on 50 km squares, showing either abundance of (based on a logarithmic scale (0-9, 10-99, etc up to 100,000+) or breeding evidence for (confirmed/probable/possible).  The latter is mostly used for more thinly spread species particularly those restricted to coastlines or wetlands. Broadly these maps work well, but are very usefully supplemented by 222 additional modelled maps particularly (but not exclusively) for the commoner and more widespread species.  These try to “show patterns of probability of breeding occurrence at a European scale” and which “can be interpreted as gradients of relative abundance”.  The “probability of occurrence” on these maps is shown in a varying shades from white (absent or very scarce) through pale pastel to dark pine green (most frequent). The technical explanation of how these maps were devised may be opaque to many but simply put these act a ‘heat maps’ showing in more readily assimilated form where species are concentrated.  In some ways these are the most interesting maps as they clearly show some species preference for (or aversion to) certain habitats (mountainous regions being a good example) and throw up fascinating details that might otherwise have been missed.  Some are fairly obvious, such as the Alpine Chough’s liking for mountains, but others are much less so. To give but one example, they show that there is a remarkable concentration of the European Jackdaw’s population in the British Isles and the Low Countries. Why? However, for thinly spread populations these maps must be used with great caution. For example, using these maps alone would give the impression on that Chough, Marsh Tit, Wood Warbler, Dartford Warbler, Spotted & Pied Flycatcher and several other species don’t or scarcely breed in Britain. Conversely, for other species like Black Redstart and Montagu’s Harrier they paint an over optimistic picture.  The other supplementary map is a smaller one showing continuity or change since the first EBCC atlas. Although some caution is needed in interpreting these maps as variations in coverage may give a false impression, they do give a good idea of shifts in bird distribution since the 1990s.  For many species, the picture is mixed with apparent gains and losses dotted across the continent which, for some, seems to reflect global climate change.  Some like Grey Partridge seem to be in retreat across the fringes of their range whilst others (notably all three egrets) have expanded their ranges enormously so it’s not all bad news!

As with the previous EBCC atlas, the maps are supplemented by an informative text which provides a useful interpretation of the data.  These are a little shorter than in the earlier atlas and lack the useful pie charts and bar graphs of the old book.  The latter gave an easily digestible estimate of the breeding populations for the main countries where a species was found, something that I miss.  Now details of national status has to be dug out of the text although for some species accounts are light on details. It was grating too at times to read about the ‘European population’ of a species which, by most definitions, doesn’t actually bred in Europe at all but only in Transcaucasia or Asia Minor (perhaps surprisingly there’s no simple catch-all name for this region). Personally, I thought that the texts did not seem quite so well ordered and organised than in the previous work but these points are nit-picking as this book undoubtedly a work of the highest order.  The texts are beautifully illustrated by charming coloured vignettes of each species too which is a bonus for art lovers.  This is a seminal work and one which can and will be a vital reference for years to come.  Interestingly, there will also be some valuable ‘spin-off’ volumes on individual countries, including Spain.