Andalucian Birders in particular will be pleased to read that some 30 kilometres west of Málaga, a new hide has been built on the Guadalhorce river, just south of Pizarra in an area called Doña Ana. Inaugurated in July 2015, the new Doña Ana hide was a joint undertaking between the Ayuntamiento (town hall) of Pizarra and the Diputación de Málaga (County or Provincial Council)

The robust wooden structure is airy, well built and relatively comfortable. Perched high on the right-hand bank* of the river, facing North-North-East the sun sets on your left hand side and rises on your right so the light is good all day long in summer. With little glare or shadow to contend with, the hide provides a good visual and photographic vantage point with plenty of shade.
There are a few negative points however; the window openings are perhaps a little on the large side for this particular location, making it easy to spook the birds on arrival or with sudden movements, the two benches are a bit too close together and there is not much room for setting up tripods or attaching scope clamps should you want to.

Bringing a new meaning to the game “hide” and seek, it’s also a devil of a place to find for the first time and it’s going to need some garden maintenance. Built on a patch of cane, the view to the right is completely obscured and needs clearing. Furthermore fresh cane is starting to sprout up right in front of the hide, as are the Tamarisk bushes lower down, however Pizarra town hall has received and acknowledged an email on this subject. “Vamos a ver” as to what will happen.

On the positive side, once you know where it is, access is quite easy, there is a slot for viewing from wheelchairs and the location appears to be well chosen, relatively flood resistant with good views and free from rubbish left by picnickers etc. The information board claims a possibility of sightings of up to 190 different bird species, although that is obviously not likely to happen in one day but it does indicate there are a lot of different birds present in the area. In short it’s quite rewarding and three-cheers are certainly in order for Málaga County Council and Pizarra town hall for their efforts, the site and providing the materials for the hide.

In August it is very hot even down by the river but it is also very picturesque. The view over the river is an impressive steep rock escarpment. The flowing water, the thick green reed beds and wiry Tamarisk bushes strike a strong contrast with the parched yellow grass, arid brown sand and the sun bleached river rocks lodged in the shallows, where the birds pause to drink and turtles sunbathe. 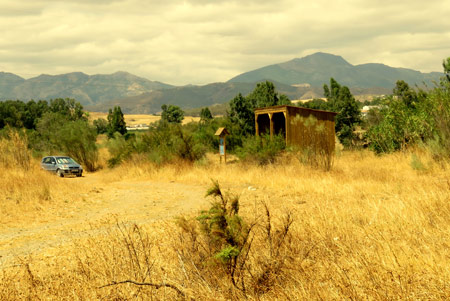 Waders were scarce to non-existent at the hide in August, not even a Sandpiper or an alarmist screechy Black-winged Stilt. However Grey Heron, Black-crowned Night Heron, Little Egret and Cattle Egret, Moorhen and Mallard were present in good numbers, as were Goldfinch and Greenfinch. Close by we had several sightings of Golden Oriole, Turtle Dove and a White Stork. Both Booted and Short-toed Eagle soared overhead fairly frequently, interspersed with Spotless Starling, Collared Dove, Bee-eater, Swift, Barn Swallow and House Martin. Several Spotted Flycatcher, a Stonechat, Wagtail and Blackbird popped in and out, as did two Kestrels having a mid-air argument about something or other. The monarch was in residence as well, a hovering colourful Kingfisher. Salvador, a local birder and keen photographer, confirmed the area to be rich in both resident and migratory bird life, with Black Stork and Little Ringed Plover being particularly partial to the Guadalhorce river around Pizarra.

Using the hide as a centre point, it is easy to spend several hours there. The reed beds, long grass and scattered Eucalyptus trees immediately behind the hide should not be overlooked as they are also full of birds. There are more birds in the citrus orchards behind that but these orchards are obviously fenced off farmland and best left alone.

The footpath along the river going upstream soon peters out and apart from the rabbits and a single Pomegranate tree, a favourite of the Sardinian Warbler, is not so interesting.

Downstream is better. Running for three or four hundred meters alongside the river the overhanging trees and pools dotted along the path make good shaded spots for watching more birds, turtles, surprisingly big river fish, numerous red and blue dragonflies and if you are very quiet and a little bit lucky, you’ll see Otter, as we did.

The banks of the Guadalhorce river are generally quiet but in addition to providing summer homes for Bee-eater and burrows for Rabbit, this is also an important farming area. Clearly visible on the other side of the river from the hide there are ploughed fields and then the old Pizarra to Málaga road with some passing traffic. There is also a railway line with a few trains, so visitors can expect some natural noise and maybe the odd tractor. A man on horseback may say hello as he passes by to check on the hobbled horses left by the river to graze, which some may find disturbing, along with the discarded empty shotgun cases but this is all part of everyday life in the Andalucian campo, where birding is a relatively new but a rapidly growing pastime. All in all – well worth the effort.

* The right-hand bank of a river is the one on your right when facing downstream.
** More photos of the hide at: www.facebook.com/andaluciathecampoandthecoast