I get to count my blessings that both companies and individuals alike choose me to guide for them whilst visiting Morocco. I love this wonderful country, the scenery, the wildlife and the people. Each visit cultivates the passion I have for Morocco. Increasingly I am involved in guiding people who are putting together their own itinerary and tailoring the holiday to suit themselves, of course with help from myself and associate companies. On this occasion I went to Morocco during the autumn and had the very real pleasure of accompanying visitors from America and showing them their wish list and more. As our next door neighbour Morocco is very accessible to us all, so I hope my recounting a recent journey into this exotic and very different country will interest you. 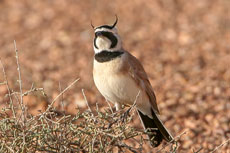 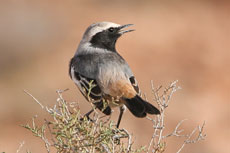 The group had designed their tour to get the most out of local culture, history and of course wildlife, so the route involved some fairly long days, but always the interest was held by the variety of subject and scenery. They were also able to add days both before and after their guided time with me, always a good idea to enjoy time on your own! The chosen route involved meeting-up in Fez, where our intrepid group of travellers enjoyed the ancient souk, before proceeding to Midelt, then into the Erg Chebbi sand dune complex of the Moroccan Sahara. After the spectacle of the dunes we struck out to the west and visited the stone deserts around Boumalne de Dades, staying in one of my favourite Kasbahs. Next up we travelled across the High Atlas Mountains to Marrakech, then on to Tiznit for a couple of days in and around the Oued Massa. Then it was back to Marrakech and a parting of the ways, although the group were to spend three more days unaccompanied, other than with our driver, in Morocco. 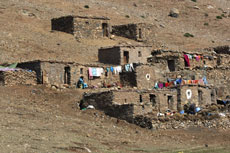 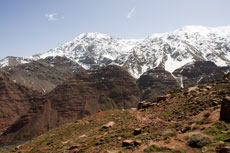 The journey from Fez incorporated a lunch stop at Ilfrane and allowed for us to visit the very picturesque area Forét de Cedres, an ancient forest and home to Barbary Macaque monkey, as well as allow us to see one or two specialist birds we were in search of. At this point it is probably best to give the reader an idea of the group’s wish list: Bald Ibis (seen), Marbled Teal (not seen), Barbary Partridge (seen), Double-spurred Francolin (not seen), Houbara Bustard (not seen), Cream-colored Courser (seen), Crowned Sandgrouse (only Black-bellied seen), Red-necked Nightjar (not seen), Egyptian Nightjar (seen), Barbary Falcon (seen), Greater Hoopoe-Lark (seen), Bar-tailed Lark (seen), Thick-billed Lark (seen), Lesser Short-toed Lark (seen), Dunn’s Lark (not seen), Thekla Lark (seen), Wood Lark (seen), Temminck’s Lark (seen), African Blue Tit (seen), Iberian Chiffchaff (seen), Fulvous Chatterer (seen), Rufous-tailed Scrub-Robin (not seen), Atlas Flycatcher (seen) and Moussier’s Redstart (seen). Various reasons, not excuses, contributed to the not seen list, mainly we visited the wrong areas or birds had already passed through on migration, of course some species are just plain difficult too!
The journey from Midelt to Merzouga took us over the Atlas Mountains and through some magnificent scenery. High in the mountains we found Black and Seebohm’s Wheatear as well as a number of Ruddy Shelduck around the high plateau’s lagoons. Moussier’s Redstart were fairly frequent in scrub areas, whilst a Barbary Falcon gave a showing in the high pass. We listed a number of prime species during the day and managed to see our bonus bird the Pharaoh’s Eagle Owl, superb. Arriving at our hotel we were greeted by a gang of Fulvous Babbler (Chatterer) and both Spotted and Pied Flycatcher. The grounds produced the odd passerine such as Sub-alpine Warbler, Tree Pipit and Yellow Wagtail, but during our two nights here we also managed to locate the highly prized Egyptian Nightjar, a great find and an extremely rare bird in Morocco. Our journeys into the surrounding desert were hard work, but we did manage one or two target larks including Desert Lark, plus the odd Brown-necked Raven, always good to see and seems to be increasing in the southern deserts. 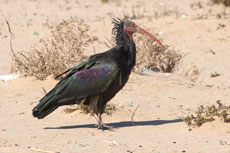 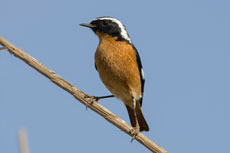 Heading westwards we made our way to Boumalne de Dades and giving ourselves time we visited the Todra Gorge, spectacular despite becoming a bit of a tourist trap. Grey Wagtail and Crag Martin showed well here as well as House Bunting and Blue Rock Thrush, used to be a time when Bonelli’s Eagle could be seen here, but I’ve not observed it at this location for the last 5 or more years! After lunching in the gorge we drove to Boumalne and allowed time for a slow recce in the area of the famous Tagdilt Track. We managed a few target birds here including Greater Hoopoe Lark, Temminck’s Lark and other regulars such as Trumpeter Finch, Black-bellied Sandgrouse and Greater Short-toed Lark. Some of the group’s ‘must see’ birds were also seen and one of the showiest was Red-rumped Wheatear, a large member of a great family of birds! Migrants were apparent with Pied Flycatcher and Common Redstart very common in the riverside (Dades) wadi. We dipped on Cream-coloured Courser here and in Merzouga, but I think they must have dispersed westwards already.
Our next destination was Marrakech, so it was important to get an early start that would allow for various excursions en route. We drove through the beautiful Valley of Roses and made good time, this allowed for an off road desert drive seeking Thick-billed Lark, here we also managed a couple of close-ups of Spectacled Warbler! Miles from water we had the bizarre experience of seeing Osprey perched on a tall pylon in the middle of sand desert, also we were treated to some absolutely beautiful male Desert Wheatears as well as a stunning male Mourning Wheatear. The odd flock of Eurasian Bee eater brightened our journey and eventually, whilst crossing the High Atlas, we found African Blue Tit for the group. Long-legged Buzzard also showed well and there seemed to be a clear demarcation between the more southerly White-crowned Black Wheatear and its higher altitude cousin Black Wheatear. Entering the city of Marrakech the birding never stopped with both Little and Pallid Swift wheeling around in the skies above the metropolis, Booted Eagle soared above the hotel to the sound of Common Bulbul as groups of these birds ransacked empty restaurant tables… 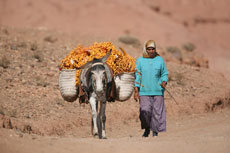 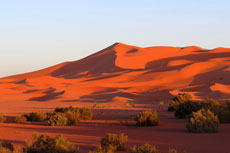 Tiznit was our next stop for a 2 night visit. It would give us time to visit the area surrounding the Oued Massa as well as a couple of visits to the Oued Sous, a superb estuary in danger of disappearing under pressure from development, but to date a worthwhile birding area. Our first day was spent at the Oued Sous, where we had great view of Barbary Falcon and Black-winged Kite as well as a plentiful supply of waders/shorebirds, but the star for the day was an adult Isabeline Wheatear, just a stunning bird. Stone Curlew was found in their normal haunt near to Oued Massa, whilst a 2 year old Bonelli’s Eagle hunted over the reeds near to the shoreline. Our first full day was dedicated to finding Northern Bald Ibis and after what seemed an age we finally found a group of c.50 birds on the cliff tops north of the Massa, looking towards Agadir we spotted another, much larger group of around 150 birds, so in total we were observing almost half of the world’s population, amazing! Our next day involved heading back to Marrakech, but not before exploring the upper reaches of the Oued Massa where we eventually caught-up with another must see bird for the group, the elusive Black-crowned Tchagra.

Again, for me, yet another fantastic excursion into the lands of Morocco, so easily reached for those of us fortunate enough to live here in Andalucia. The country holds a surprising number of bird species that are not seen in our part of Spain, so it is easy for me to highly recommend an adventure into the wild areas of this North African wonderland.