Although still shown on several road maps Laguna de los Tollos, near El Cuervo on the border between the provinces of Cadiz and Seville, has been largely ignored by birdwatchers visiting SW Spain.  It failed to get a mention in the compendious “Important Bird areas in Europe” (1989) nor in any of the half a dozen or so birding site guides published in recent years. Yet until the mid-1970s it was one of the best sites to see many of the rare wetland species for which the area is famed. Breeding birds included White-headed-Duck, Purple Swamphen and Red-knobbed Coot.  It also regularly hosted some of the largest flocks of both Marbled Duck (c50 birds) and Ferruginous Duck (c100) in the area whilst it was a regular spot for Ruddy Shelduck.  Many waders and thousands of Greater Flamingos regularly used it as a place to rest and feed.  This is hardly surprising as it was the third largest laguna in Andalucia and strategically placed on the avian commuting route between the Coto Donaña and Laguna de Fuente de Piedra.

So what happened?  Unfortunately, the impervious clay on which it rested and which allowed the shallow basin, in which it nestled, to fill with water was of a very particular kind.  This ‘attapulgus’ clay had some special characteristics which made it suited to making ‘Fuller’s Earth’ and had other uses. So it was that, in 1976, a large claypit to mine this mineral was opened next to the laguna to produce that absolutely vital material …. cat litter!  What inevitably followed has been rightly described as an ‘ecological disaster’.   The deep excavations of the pit altered the hydrology of the basin reducing the water level in the laguna and reducing the persistence of  winter flooding. Eventually, the pits and the waste they produced swallowed up about a third of the original laguna.  Unfortunately, despite its rich avifauna, the laguna lacked the sort of legal protection for environmetally important sites that we’d take for granted these days.  With its  supply of water compromised things looked set to go into a terminal decline as the basin dried out (see –  https://www.youtube.com/watch?v=17Krs9rhPTo). 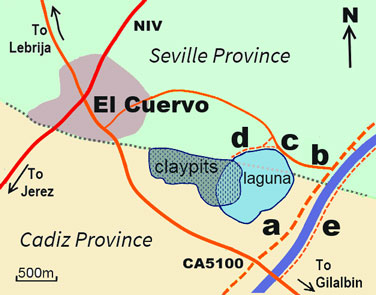 Things began to  change when, in 1986, Laguna de los Tollos was optimistically included in the “Plan Especial de Protección del Medio Físico de la Provincia de Cádiz” and designated Special Area of Conservation.  Yet, at first, nothing much changed.  The claypit continued to be worked and the state of the laguna continued to deteriorate. Further damage was done by the building of the E5 motorway which further disrupted the hydrology, human disturbance and illegal dumping.  This state of affairs, though,  did not escape the notice of the local environmental activists who organised several protest marches and petitions highlighting the damage to the laguna (see – https://www.ecologistasenaccion.org/article27104.html ).  In 1994, an internal report by the Environment Agency of the Andalusian government found that the quarry was causing serious ecological damage to the laguna. It also recommended that quarrying  should stop. However, despite the obvious damage being done to an important wildlife site the mining company stubbornly continued to work the site.

Fortunately, although commercial interests could ignore protests, they couldn’t win in the courts and in 1998 they lost a crucial legal case.  This forced the mining consortium to abandon the site although they were not compelled to restore the habitat as many had hoped.  With the area now under the control of the Junta de Andalucia,  an ambitious plan to restore the habitat was launched. That much maligned organisation, the EU stumped up over €3 million and the Andalucian junta added nearly €5 million.  Work to solve the hydrological problems began in September 2010 and work to seal the old claypits should finish this year (2014). With the active engagement of local people the laguna has been fenced off, trees have been planted and an educational programme launched.  It’s not been without difficulties and even as late as 2004, when the reserve’s boundaries were settled, there were problems of damage from agriculture and illegal dumping.
Having ‘found’ the laguna almost by accident in 2010 by discovering photos of Flamingos there on the internet, I was determined to have a look for myself. In May 2011 I managed to have a quick look at the laguna which, thanks to heavy winter rains, was still wet and hence full of birds. Not quite being sure of what to expect and with time pressing, mine was the briefest of visits.   Subsequent visits have shown that this is now a site very much worth exploring.

On my first visit in early April this year I found the place alive with birds once more, but, significantly, the high water levels were no longer simply a matter of fortuitous winter rain, but of careful planned management.  The birds included Purple Swamphen, over 30 Black-necked Grebes, half a dozen Greater Flamingos, similar numbers of Eurasian Spoonbill, a good variety of ducks (Pochard, Red-crested Pochard, Gadwall, Shoveller & Mallard), a couple of dozen Whiskered and a few Gull Billed Terns, Avocets, Black-winged Stilts, Little Ringed Plovers, Collared Pratincoles and  in excess of 300 Eurasian Coots (perhaps a hopeful sign that Red-knobbed Coot may soon return).  A subsequent visit in early May produced a similar range of species plus several passing Curlew and Common Sandpipers and, best of all,  3-4 White-headed Ducks.  Some eight birds are present this summer and hopes are high that they may soon  breed once more.  Other birds present on the reserve this spring included Purple Heron, Little Bittern, Great Reed and Melodious Warblers.   The tamarisks   should also be worth checking for Olivaceous Warblers from May to August.   Black-winged Kite are present nearby and during passage almost anything might turn up.  I certainly found  much more of interest on my two visits to Laguna de los Tollos this year than I managed to find at Laguna de Medina, a much better known and more highly regarded site.

I was also delighted to meet up with some of the volunteers (from the Asociacion Ambiental Laguna de los Tollos) whose vision, hard work and dedication is beginning to transform the site.  Volunteers run educational programmes for local children and there was a real sense of pride in the laguna.  (see – www.lagunadelostollos.com & https://www.youtube.com/watch?v=fT-eK_MLll8).  The project is well supported by the people of nearby El Cuervo with one local venta owner telling the press “It’s a very exciting and positive project . Whenever people come here to work (on the restoration) or employment is given to cuerveños it’s a good thing. We, like other bars and restaurants, can do well.”
Much remains to be done – when I was there a dog was lose on the reserve –  but there are plans to provide a hide and improve educational facilities.  So I left the place with huge optimism for the future. It is certainly a site that warrants visiting both for the birds and as a way of supporting this project.  El Cuervo may be a little out of the way, but it is en route between the famous Guadalquivir marshes near Trebujena and the less famous, but brilliant,  Lagunas de Espera. Then again in future you might not bother with Espera as you’ll get all the birds you want here!