“……And beyond Osuna´s   huge barren plains and steppes with several salt lagoons which shone with the sun”. 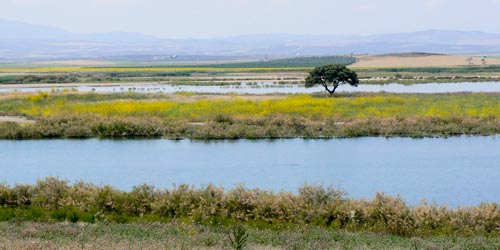 With this short description Charles Edmond Boissier portrayed the view over the Guadalquivir valley from Pilar del Tolox one day at the end of September 1837, when he climbed Sierra de las Nieves to gather pinsapo (Spanish Fir) cones, material which this renowned botanic used further on to describe the science of this remarkable Andalucía fir.

Doubtless from Sierra de las Nieves one can see the Guadalquivir Depression with Subbetic units, but from the distance it is hard to imagine the rich biodiversity of these barren plains and appreciate even more the great beauty of these hilly landscapes sprinkled with salt lagoons. Most of these lagoons are not there year round, have a round morphology, present a flat bottom, are shallow and extend like the continuation of the soft shore like banks which broaden like the surrounding grain producing steppe, which produces an original mixture of ecosystems and  turns this region into the only place in Andalucía where noticeable aquatic and lowland bird  populations coexist in nearby places. These qualifications have justified the inclusion of more than 35,000 ha of these lands in Red Natura 2000, thereby declaring them as ZEPA with the denomination “Campiñas de Sevilla” (Sevilla´s   countryside”).

In springtime, after autumn and winter rains, is when the lagoons reach their maximum flood level and their greatest splendour. It is in this season that there is a curious mixture of migrating birds coming from Africa with others that leave for central and northern Europe, including the Arctic. The reproduction of White-headed Ducks in the small Gobierno Lagoon is noticeable: 15 pairs and 56 chicks born in 2013, one of Andalucía´s best places, together with several pairs of  Black-necked Grebes, Red-crested Pochards and 1 heronry which in 2013 comprised 3 pairs of Squacco Herons, 1 pair of Glossy Ibis, 30 pairs of Night-Herons and 200 pairs of Cattle Egrets. Groups of Kentish Plovers are dispersed in this region, as well as Avocets and Black-winged Stilts. The Greater Flamingo is also a frequent species which can be observed in groups of several hundred individuals and the Gull-billed Tern which can be seen in small groups in spring and summer.

Raptors are also represented in the region, with samples of Spanish-Imperial Eagles, Golden Eagles and Bonelli´s Eagles who profit from abundant rabbits, hares and partridges, as well as concentrations of water fowl in the lagoons, which all contribute to establishing their temporary hunting grounds in these plains. At any time of the year the Griffon Vulture flies over this region, while the Red Kite is frequent in winter with sleeping places that exceed hundred birds and its relative, the Black Kite is frequent there during migration periods. During this time of the year Short-toed Snake Eagles and Booted Eagles are to be found. As nesting species, Black-winged Kite with 12 pairs in areas with scattered trees or small woods should be mentioned and the Marsh Harrier with 5 pairs in lagoons with ditch reed and tamarisk. Among the nocturnal raptors the Eagle Owl, also a successful nesting species of the area, is to be mentioned. Nevertheless, if for something this countryside is to be noticed is because of the existence of an extraordinary bird community of open spaces. Among the limicoles of steppe origin, there is the Collared Pratincole, a species with several breeding colonies established at the lagoon´s borders, fallows and dry farmlands and which amount to over 200 pairs and the Stone Curlew, a night bird with great yellow eyes which has a large reproductive population, which is added to a large number of wintering individuals. Another singular species which has a small population is the Black-bellied Sandgrouse, a bird with remarkable morphologic adaptations, colorful and reproductive, in order to successfully take advantage of the arid grounds and which is almost extinct in western Andalucía.
Among the steppe raptors, the Lesser Kestrel is the most abundant species with remarkable urban colonies in the towns of Écija, Osuna and Marchena, usually in churches and other monumental buildings and fewer numbers in rural, scattered inhabited farms and farm ruins. These play an important role as nesting grounds for various bird species common in these regions, like the European Roller, the Common Kestrel, the Barn Owl, the Jackdaw and the Spotless Starling.

Another raptor, the Montagu´s Harrier, builds its nests on farmed cereal fields, their population being between 10 and 20 reproductive pairs. This species is replaced in winter by the Hen Harrier, which has several sleeping places in this countryside and in the last years by isolated individuals of Palled Harriers. At the same time the Peregrine Falcon, the Merlin and the Short-eared Owl spend the winter there.
The Little Bustard and the Great Bustard represent the Otus family. The first one has a male reproductive population of over a thousand individuals and they are to be found in heterogeneous grounds together with small and medium dry cereal fields with fallow, olive trees, pasture and leguminous vegetables. 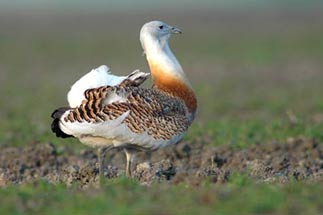 On the other hand, the Great Bustard, an emblematic species, has in this rolling countryside the biggest population in the Guadalquivir Valley, with over 160 individuals. It is there during the whole year, yet most males are migrants, leaving their exhibition places after mating season and returning at intervals after summer, between September and January. In Osuna displacements have been recorded to the north at a maximum distance of 236 km, as well as shorter movements upstream along the Guadalquivir Valley. This male migratory behaviour of the Great Bustard was already described by Abel Chapman and Walter J. Buck at the end of the XIX century in “La España Agreste”, when this species was abundant in Andalucía. But the trip described in this book is towards the south “in the midst of May, while I was hunting wild goats I was able to observe seven Bustards in the heart of Sierra de Ronda, flying over its high peaks”. Nowadays there is evidence of displacements of Bustards though mountain regions, although outside of Andalucía. In nearby Extremadura individuals have been seen in Gredos and Sierra de Gata and it is known that a bird from Toledo spent the summer in Gredos, Cáceres Province. Will the Great Bustard continue overflying the Pinsapo (Spanish Fir) forest looking for mild summer temperatures? Everything is possible: in Gilena, a town south of Osuna, a few years ago two birds were seen at the end of May slowly flying towards Sierra de las Nieves.