Although birds are my primary interest, like many birdwatchers I enjoy seeing other forms of wildlife. Given my interest in Spain, it was inevitable that seeing Iberian Lynx Lynx pardinus would come high on my wish list. However, for years I had assumed that given the animals increasing rarity this was an impossible dream. It wasn’t until bird watching friends in Kent saw them that I realised that encountering Lynx in the wild wasn’t quite the impossible challenge that I’d imagined. Two main nuclei of the animals’ population remain – about 25-35 in the Coto Doñana and 80-100+ in the Sierra Morena north of Andújar. So in spring 2013, my ambition finally crystallised into a plan of action. Knowing that I was going to be out in Cadiz province in February/March 2013, it wasn’t too hard to add a quick side trip to look for lynx. 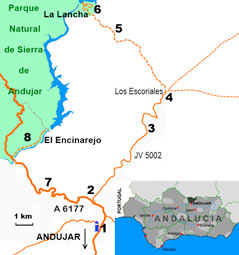 In theory the timing was good as, after they have young (in late March/April), the females are said to be more elusive. It’s also suggested that they tend to be more active during the day in winter than at other seasons. An indecently early start from Alcalá de los Gazules, it being a 4 hour drive to Andújar, meant we had most of the first day ‘on site’, the whole of the second day and a good part of the third. Unfortunately, I managed to pick a period of heavy rain, thick fog and distinctly chilly temperatures. It wasn’t a castanet ensemble following us around, but my wife’s teeth chattering! Although Lynx were seen during our stay, sightings were brief and distinctly few, so we missed out. Although lynx are more active during this period – the mating season – the short days and unpredictable weather can play havoc with your plans. Besides, given the nature of the terrain it’s quite possible for one group to see a lynx whilst others, only a few hundred metres away, miss it entirely. It was good to see several Spanish Imperial Eagle, Black Vulture, astonishing numbers of Azure-winged Magpie, Rock Sparrow and a Wild Boar, but there was no hiding our disappointment at not getting Lynx.

The more so since the day after we left the area, the weather improved and our Kent friends, out on another sortie, saw one! However, whilst we’d been thoroughly dampened in the rain of the sierra, our enthusiasm for seeing the world’s rarest large cat remained un-diminished. Having been told that May was a poor month for seeing them as the female is busy with young and rather sedentary; we planned our next visit for September. However, news from a correspondent that he had them in early May the year before we hastily re-organised ourselves to go again in early May (4th-9th), leaving September as a back-up. As we had allowed ourselves four full days to find the lynx, this time we left our base in Alcalá at a more civilized hour and had a more leisurely journey to Andújar. We even managed to have a look around Osuna and La Lebrija en route to look for Little and Great Bustards.
However, a mix-up over the exact location of our accommodation meant we spent the last couple of hours of the day looking for where we were staying rather than for lynx. However, we once again saw numerous Azure-winged Magpie and heard Hoopoes all over the place.The next morning we started our search by driving along the rough track to Embalse del Jándula.

If it wasn’t exactly warm when we set off but it was at least clear and sunny. It was good too, to actually see some of the scenery we’d driven through in March. So we were quite hopeful about our chances although, realistically, we knew that we’d be in for a long wait. With these thoughts in mind we approached the main viewpoint when, as we rounded a bend, we were totally amazed to find a lynx loping along besides the track scarcely more than 10 metres away! I called “Lynx!”, but it seemed so unconceivable that it was one that I almost instantly thought ‘Is it a dog?” as I raised my binoculars. But, no, it miraculously remained a Lynx! With immense savoir faire it casually ignored us as I gently swung the car to one side to get some photos. Trotting down and then diagonally across the track, it seemed totally unconcerned by the frenetic excitement it had caused. It then doubled back across the track and climbed the bank next to the car. It was a totally mind blowing moment (a hackneyed phrase but no other will do). OK, aesthetically it was disappointing that it was sporting a radio collar, but it was a truly wild animal. We later learnt that this was ‘Dingo’ a well known male which was, as we could see in the photos, blind in one eye. 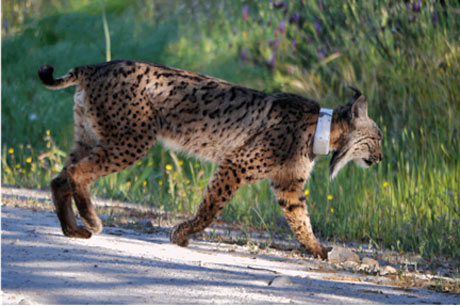 My only regret was that I totally forgot that my camera has an excellent video capacity! The rest of our stay was, understandably, something of an anti-climax. We looked for lynx several more times and even missed one by a few minutes, but the urgency had gone – we weren’t going to get a better view! It also meant I was able to indulge my other enthusiasm for history and visit nearby world heritage sites (Baeza and Úbeda). I also explored other areas of wildlife interest using the excellent ”Birding and Nature: Trails in Sierra Morena 2 – Sierra Morena de Jaén” by Rafael Romero Porrino (Pub. La Serrania). This extremely useful book gives details for sites for Black Wheatear, White-rumped Swift, Rufous Bushchat, Little Bustard and much else.

John Cantelo has been a birder since the 1960’s. Was a Field Teacher for the RSPB 2000-2010. Lives in the UK but visits Spain several times a year. Junior author of “The Nature Guide of the Andalusian Sierras.” These suggestions for seeing Iberian Lynx are a heavily edited version of the text from the forthcoming “Crossbill Guide to Andalucia” (which I am co-writing with Dirk Hilbers et al).