It is a Sunday in the month of August, 7:30 pm, when we get into our car and head by road to the steppes of Campo de Calatrava. It’s just 15 minutes drive  to start birding and we know that we have one hour, maybe a little more, to enjoy one of the last great natural spectacles in Europe. 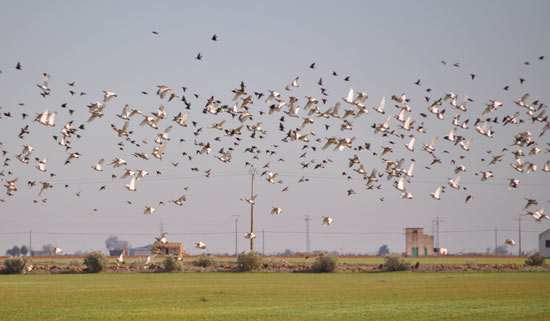 We leave the road, and after about 200m down a dusty track we start watching the target birds of our evening excursion: a flock of Little Bustard, over a dozen, scamper between barley stubble in search of the sought after cereal grains. A sudden chirping in the air makes us look up to see  ten Pin-tailed Sandgrouse moving at high speed, almost at ground level, before coming to rest in a small fallow area. We continue on our way and stop beside a well maintained olive grove. A group of Crested Lark fly out of the way to let us pass. Under the shade of an olive tree rests a panting handful (covey, in English) of Partridge. Always cautious, the Partridge move around the old olive tree to keep away from us. A quick look with our binoculars uncovers other visitors to the site; a pair of Kestrels and an Iberian Grey Shrike each watch us from their high vantage points. In the distance, standing on a pile of stones, a curious Little Owl monitors its territory. Our 4×4 continues and ascends a small hill, surprising a group of Montagu’s Harriers resting in the stubble. Some undertake a fast flight, but a couple of females still remain in the dry scrub. We decide not to stop the car to avoid disturbing them. Going down the hill we are shocked by a large flock of Great Bustards (over 50), which take off when they see us.

We’ve  always been fascinated by these fabulous birds that, weighing more than 16 kgs in males, are said to be the heaviest flying birds on Earth (with the exception of the Kori Bustard  Ardeotis Kori). They stop at a safe distance of about 600m, and we watch them with our telescope. Near to the Great Bustards we discover a small group of jittery Stone Curlew. Not far from there a shepherd directs his Manchego sheep into the fold. The sun turns red and begins its descent which gives us a magical landscape, evocative and vibrant, with the colours that draw the last dying rays and the dust raised by the flock of sheep. We decide to leave while a company of Calandra Lark fly around us and seem to be saying goodbye. We were unlucky with the Black-bellied Sandgrouse, but we didn’t mind; we’ll return another day.

With numbers dwindling in Spain, steppe birds have one of their last great refuges in the steppes of Campo de Calatrava (Ciudad Real province, region of Castilla-La Mancha, just over the northern border of Andalucía), an exceptional area that extends to a total area of ​​8,978 ha. Becoming increasingly isolated, threatened by numerous infrastructures such as highways, recreational farms and even ruinous airports, steppe birds concentrate in small areas where they still have a last chance for survival. Also the new CAP (Common Agricultural Policy), threatens them, a nonsense that the European Union is determined to keep, favouring the interests of large Europeans landowners and clearly against organic farmers and the maintenance of a rural world that respects the environment. Even the regional government of Castilla-La Mancha joins the harassment of our steppe birds by joining voices that demand authorisation for new large intensive vineyards in our insufficiently protected steppe areas. A bleak future for these last treasures of our biodiversity.

But despite this, our Great Bustards, our true winged giants, resist. At least 17 areas with significant populations of Great Bustards have been identified and studied in our province of Ciudad Real, with a total population of over 800 individuals in the breeding season which is increased by more than 50% in winter, when many birds from the north of Spain fly down to our southern winter shelters. Winter is when the plains of Campo de Calatrava are teeming with life, and large flocks of Great Bustard (sometimes above 200) may be seen with mixed flocks of Little Bustard & Pin-tailed Sandgrouse that can number, easily, 1200 birds, an unusual and little studied association which can only be admired in our La Mancha steppes, one of the most valuable natural areas in Spain.

Currently, the conservation status of our “big five steppe birds” is rather difficult to define, although all of them are considered VULNERABLE in the Red Book of Birds of Spain (2004 Edition). These are the most important and updated estimations of our main steppe birds in Spain: 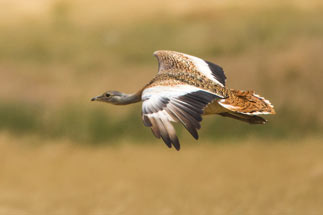 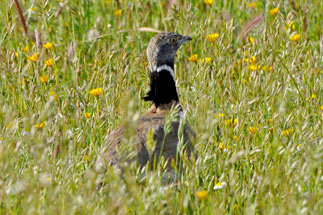 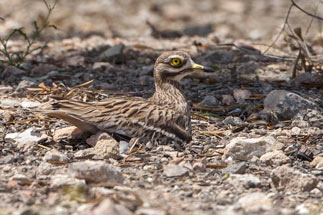 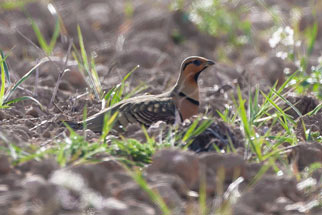 Below is a list, not exhaustive, of the main species, excluding waterfowl that can be observed within the limits of the steppes of Campo de Calatrava.