Andalucía, the southern most point of the Iberian Peninsula, is the second largest of the autonomous communities in Spain and it contains 8 provinces.  It covers nearly 9 million hectares, an area larger than Scotland and almost as large as Portugal and it is a birdwatcher’s paradise throughout the year. 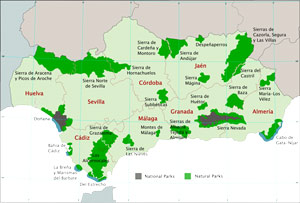 Essentially, as shown in Figure 1, Andalucía consists of a large plain, the valley of the Rio Guadalquivir, hemmed in by mountains on every side except for the south-west where it reaches the Atlantic Ocean.  The combination of mountains, a large river valley and coastal plains provide a wide range of different habitats that attracts a large number of different species of birds.
In the north, the mountainous Sierra Morena separates Andalucia from the rest of Spain.  To the south there are parallel mountain ranges, one near the Mediterranean coast and the other inland.  The Sierra Nevada, part of the coastal mountain range, in the province of Granada, has the highest peaks in Spain: El Mulhacén at 3,478 metres and El Veleta at 3,392 metres.
In a mere 50 kilometres one can travel from the subtropical coast within the province of Granada to the snowy peaks of the Sierra Nevada.  Andalucia also includes both the dry Tabernas Desert in the province of Almería and the Sierra de Grazalema Natural Park in the province of Cádiz, which experiences Spain’s greatest rainfall.  All told, there is a wide variation of habitat that attracts a wide range of  natural life.

Protected Landscape
The Guadalquivir is 657 kilometres long, originating in the mountains of the Sierra de Cazorla in the province of Jaen.  It flows west, draining 58,000 square kilometres of land to reach the sea at Doñana.  Like other rivers that have their estuary in the tidal Atlantic it does not form a delta, but the accumulation of the sediment carried down the Guadalquivir over hundreds of years has created the great marshes of Doñana, which is the foremost national park of Spain.  In addition to Doñana there are a further 23 National and Natural Parks in Andalucia and their locations are shown in Figure 2 below. 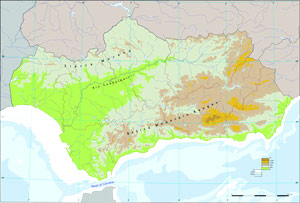 Nearly a fifth of the land mass of Andalucia is protected inside National and Natural Parks.  This is an area almost as big as Wales.
Migration
Andalucia has a large range of natural habitat that attracts a wide variation of bird species, which is a great attraction to bird watchers throughout the year.
In addition there is also migration.  A large number of species, that have spent either their summer breeding in north-west Europe or their winter in Africa, pass through Andalucia during the migration periods.
The Strait of Gibraltar is one of two major European passages for migrating birds, especially raptors and other soaring birds.  Soaring birds cross at the Strait of Gibraltar as they rely on thermals and updrafts which only occur over narrower expanses of water.  One of the most impressive sights over the Strait is when flocks of storks, sometimes numbering up to three thousand, cross en masse.  Each year tens of thousands of raptors cross the Straits, south into Africa between July and November and back north into Europe between late February and mid-June.  For about eight months in the year you can see raptors on the move.

Different Bird Species
So how many different bird species can you see in Andalucia?  Well, the Society’s systematic list contains 523 different species of which, at the simplest level, there are 132 resident breeding, 73 migrant breeding, 81 passage migrant, 48 winter visiting and 3 summer visiting species.  In addition there have been 139 different vagrant species recorded and we have 47 introduced species of which 9 have been recorded breeding.  Also during the winter the numbers of resident birds are increased with birds from the north over-wintering.