While the Red-footed Falcon (Falco vespertinus) is a not uncommon spring migrant to eastern Spain, particularly to the Balearic islands and Catalunya with occasional records elsewhere, it was obvious from early May that a fairly large movement took place in the last few days of April 2008 and first week of May, with unprecedented numbers turning up in all sorts of places. First reports were from the south of France (per Georges Olioso) which reflected the large numbers which had been blown west off the more normal easterly migration track after a prolonged period of easterly winds and birds had been recorded in large numbers along the whole of the southern departements in the last few days of April. In Spain this westerly movement of wind-blown birds was first noted with early records around 26-29 April in Catalunya, the Balearic Islands and as far south as Tarifa (Cádiz). 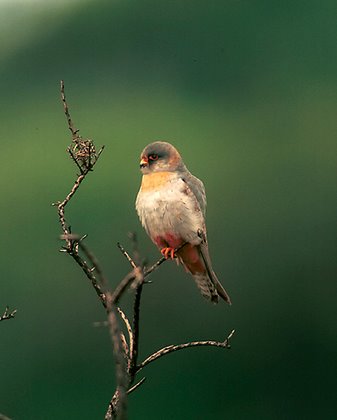 Balearic Islands apart, in mainland Spain as was perhaps to be expected, Catalunya and particularly the province of Girona received the largest concentrations of immigrants from 1 May onwards, especially so in the general area of the P.N. Aiguamolls de l’Empordà which held at least 30 birds on 3 May with a provincial total of 40+ on the same date. This provincial total was exceeded with 56+ on 6 May. Numbers at the best sites diminished throughout the month as birds dispersed but there was still a provincial total of 41 on 18 May and 40 on 22 May. The more southerly Catalan provinces of Barcelona and Tarragona received relatively few birds with records of single birds at a few sites only.

The main thrust of the movement showed a westerly trend and in Lleida there were significant numbers with maxima of 20 birds on 9 May, with notable concentrations throughout the month at Alfés, Almenar and Bellmunt. However, perhaps because of dispersing birds wandering and then concentrating in suitable feeding areas, there was a notable c.40 at Planas de Sió alone and a provincial total of 35 birds from two sites at Alfés and Torre de Sagre only.

This westerly trend for records continued as birds were recorded with frequency across the regions of Navarra, La Rioja and Aragón, decreasing generally in numbers from east to west and concentrating at specific sites, and with fewer numbwrs the further south one goes on the eastern side of Spain.

In Aragón, the majority of records were from Huesca province where there were at least 10 birds on 30 April and 15+ in Quito (Zaragoza), on 30 April, with birds staying in lesser numbers at sites like Ainsa (Huesca) to the end of May.

To the west, in Navarra, there were fewer records, with a maximum of 6 on 28 April at Corella. Moving even further west, there was one record in Euskadi in mid May and a single bird on two dates in Asturias, ending with a late bird which actually got as  far west as Lugo province, Galicia, at the end of May.

In La Rioja there was an ample coverage of birds in the region of Rigüelo de Alfaro from the first record of 3 on 29 April and 8 on 1-2 May, then throughout May with good evidence of birds moving through the area (seen by age and sex composition) in the middle of May.

South of Catalunya, there were fewer records in the Comunidad Valenciana. In Castellón province there were at least 21 birds reported in the period 11-15 May. Good numbers were reported from Valencia province, the maximum number occurring at the Albufera de Valencia was 12 birds on 28 April before they dispersed around the area in the following days. The largest single daily number for the community was of ca.27 birds in mid May. To the south, in Alicante province, there were only two records for a maximum of 6 birds on 20 May at Villena.

Murcia, to the south of the Valencian region, had a small concentration of birds in the Torre Pacheco and Yecla areas with a maximum of 6 birds on two dates.

To the west in northern Spain, in the region of Castilla y León, there were a few records of from the provinces of  Burgos, 1 record, and Valladolid where there were 3 birds in the north of the province. The province of Soria rather greater numbers with 8 at Ribarroya on 13 May and some 14-15 in the same area on 24 May, this increase possibly because of the arrival of wandering birds settling for a while in a suitable feeding area.

In central Spain, the Madrid Comunidad, recorded the maximum of 4 birds on 5 May, while further south and east still, in the huge region of Castilla La Mancha, there were 2 records from Toledo province in mid May and 4 birds in Ciudad Real province, one staying into June. To the east of the region, there was an interesting little concentration of a minimum of 11 birds at El Cubillo de Uceda in Guadalajara province on 23 May, numbers there diminishing to 5 birds at the end of the first week of June. Further south in the same region, in Albacete province, after the first report of one on 29 April, there were 4 birds recorded on 9 May and on 29 May this had risen to a maximum for the province of 7 birds at three sites, two of these birds being caught and ringed.

Andalucía recorded very few birds, a maximum of 6, 5 of which were in the Tarifa-La Janda area, Cádiz province, from 29 April onwards, one male staying until 12 June when it sadly met its demise on the road by La Janda. There is a single record from the Sevilla area but I have been unable to get a reply from the observer and the observation is very much second hand, which is a pity. There were no records reported from eastern Andalucía.

Mallorca had much more birds than normal, and the records are not full there is good reason to believe that there may have been as many as 170 on the island, although given the nature of the island there could well have been many more, as one observer suggested. This total includes a possible 100+ reported by a farmer at María de la Salut, and even discounting this, 70 is not an inconsiderable number and considerably more than the 10 or so seen in a more normal spring.

Menorca too had its fair share of birds and although there is lack of observations in my possession, the majority coming from one observer, there were at least 52 on the island, this being the number seen at Tirant on 7 May, this including a flock of 38! Numbers fell to only 42 birds the following day.

It is surprising that some ventured out into the Atlantic, with 4 birds reaching Madeira in early May and being present still on 20 May, and another 4 birds, possibly 6, to the Canary Islands in the first week of May.

Discussion
It must be pointed out that these irruptions are not caused by lack of food (as is the case of autumnal irruptions of raptors after a good breeding year or species such as Nutcracker and some finches), but by meteorological conditions which have drifted the birds far off their normal migration track. It is not unknown for Red-footed Falcons to irrupt in this way during the spring migration. It was notable that many of the records referred to birds being seen in the company of Lesser Kestrels or Common Kestrels and hunting over and sitting in freshly ploughed or sown land where suitable wires and cables were not available. The main area of records was the north-east, decreasing further south and west, some birds apparently dispersing westwards and south.

Also, many records, where note was taken, referred to immature (2cy) birds although and this appears particularly to be so with regard to the later records, most of the adults presumably undertaking a displaced northerly migration and immature birds remaining around where food was available, often dispersing in search of better areas. A full data analysis will be carried out later by a Spanish ornithologist / biologist from Madrid.

This is the first time that there has been an effort to monitor all records of an irruption of this sort in Spain. Thanks must be given here to all who responded to an appeal for records and to them I am most grateful. 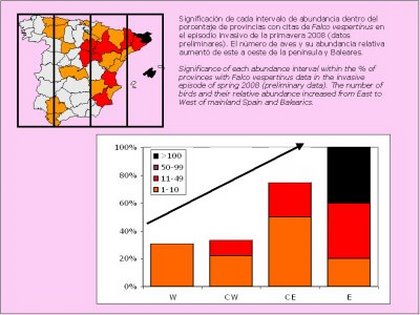 The map showing the distribution of records of Red-footed Falcon in Spain this Spring 2008 has been updated and a minor analysis has been undertaken on the basis of a four longitudinal grid established in mainland Spain and Balearics. Both number of provinces with positive results and the number of birds involved increase West to East as expected.

This article was first published on 21 June 2008, Torremolinos (Málaga).If anyone wishes a full copy of all the peninsular records, the incomplete Balearic ones will be added in the next week or so, they are welcome to write to me at: andy.birds(at)gmail.com