In fact, a successful year in all respects for birds using the lagoon during 2009. Fuente de Piedra, a wetland area in the Málaga province of Andalucía, holds the biggest concentration of breeding Greater Flamingo Pheonicopterus roseus on the Iberian Peninsula. After a disaster during 2008, due in no small way to the illegal extraction of water by local agricultural interests, this year saw a remarkable recovery for this beautiful and elegant bird. Another year and, after the disappointment of 2008, a report of a successful breeding season at Fuente de Piedra for Greater Flamingo Pheonicopterus roseus. 2009 saw the 25th anniversary for ringing of the Greater Flamingo chicks at Fuente de Piedra and a total of 600 chicks (only a small representative sample of the total raised) were fitted with specially coded plastic colour rings. These colour rings can be easily read through telescopes and sometimes through binoculars, allowing observers to report on the movements of these birds as soon as they gain their independence and are able to fly to feeding grounds throughout the region and North Africa. 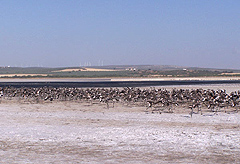 The ringing of Greater Flamingo chicks is a highly organised affair and run with military precision. The group of volunteers, numbering somewhere over 300, embark during cover of darkness slowly and silently encircling the nursery of young. As dawn arrives the nursery is slowly and safely encouraged towards a fence line and bell mouth shaped entrance to a holding corral. For the protection of the young, the entrance and corral are lined and padded with soft fabric and the corral is circular to avoid any sharp edges. This year, from the moment the required number where successfully corralled to the moment when all had been ringed and released took a grand total of 2 hours. If you consider the operation and further that each bird is processed for weight, measurements, blood sampling and inspected by attending veterinaries, then the minimum of time taken is a huge tribute to the thorough organisation of the operation. 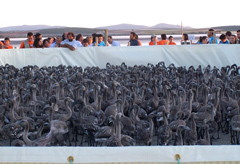 It’s been quite a year for the species at Fuente de Piedra with in excess of 30,000 adults being reported on occasions. As the water levels drop, many adults make the daytime journey to Huelva and the Doñana to feed and return during the night to provide necessary sustenance for their young. An undisputed burden and act of dedication with a round journey every day of at least 160km to feed their offspring! Talking with the wardens Lesser Flamingo Pheonicopterus minor apparently attempted to breed, but they believed the eggs were accidentally broken by the brooding adult and no further evidence for any further breeding was recorded.

Photographs used illustrate the corral and also show a fraction of the nursery. Photographs courtesy of José A. Cortés