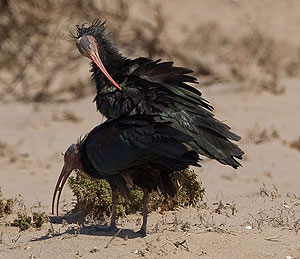 A pair of Northern Bald Ibis (Geronticus eremita), of which less than 250 individuals survive in the whole world, have managed to breed in the wild in Spain for what is probably the first time in 500 years. The pair have laid two eggs in the Spanish Ministry of Defence training ground in the Sierra de El Retín, in Barbate (Cádiz).

The breeding represents an important landmark for the ‘Proyecto Ibis Eremita’, which with the help of the Zoo Botánico de Jerez and the Estación Biológica de Doñana, is seeking to reintroduce the bird to areas where it has become extinct and to strengthen existing wild populations in North Africa.

The last ‘definite’ reference to the bald ibis breeding in Spain is from a 15th century falcony book.