Much has been discovered about birds by watching and counting them, but such methods rarely allow birds to be identified as individuals. This is essential if we are to learn about how long they live and when and where they move, questions that are vital for bird conservation. Placing a lightweight, uniquely numbered, metal ring around a birds leg provides a reliable and harmless method of identifying birds as individuals. Each ring also has an address so that anyone finding a ringed bird can help by reporting where and when it was found and what happened to it. Some ringing projects also use colour rings to allow individual birds to be identified without being caught. 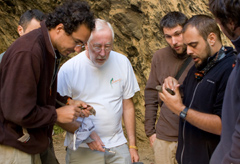 Although we have been ringing birds for nearly 100 years, we are still discovering new facts about migration routes and wintering areas. However, the main focus of ringing schemes today is monitoring bird populations. Ringing allows us to study how many young birds leave the nest and survive to become adults, as well as how many adults survive the stresses of breeding, migration and severe weather. Changes in survival rates and other aspects of bird biology help us to understand the causes of population declines. Such information is so important for conservation. Two special projects to collect it, the Constant Effort Sites (CES) scheme provide information on population size, breeding success and survival of bird species living in scrub and wetland habitats. The Retrapping Adults for Survival (RAS) project gathers survival data for a wide range of species, particularly those of current conservation concern. 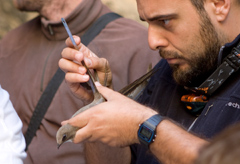 Recently I have been involved in a study which is seeking to learn more about Alpine Swifts Tachymarptis melba. The study is in its fourth year and is co-ordinated by the University of Salamca. It is a wide-ranging research focusing on all aspects of social behaviour and biology. It is surprising how little is known about this species and part of the research involves such simple things as biometric studies. For example, up until now, there seemed to be no clear criteria available on how best to sex and age Alpine Swifts, pretty basic stuff, but one which needed careful and organised studies to achieve the answers. 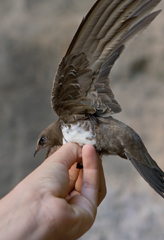 The study has involved the catching of adults at breeding areas and allowing for the processing of several birds in a short a space of time as possible, so important so as to cause least impact on individuals and colonies. By collecting biometric data for several individuals, the more the better, then calculations can be done to examine mean averages on such things as primary and tail feathers. After a time it became clear, though still subject to some individual exceptions, that wing length can help determine sex and the measurement of the fork in the tail can also help with sexing individuals. A further clue can be found by measuring the (relaxed) depth of the breast band, with males appearing to show a much larger and deeper band than the females. The varying degree of white to cream colour of the throat patch can also help distinguish sex, the female nearly always cream as opposed to the bright white of the male. The shape of the outermost tail feather can determine the age of the bird, the juvenile having the inner web convex and rounded in shape compared to the emarginated concave shape of an adult. A second year bird (first summer) still shows a convex shape to the inner web, but much less so than the juveniles.

Note: Notable examples of the importance of ringing was to show that declines in the number of Sedge Warblers breeding in Britain and Ireland was linked to lower levels of rainfall in their African wintering quarters. The BTO have also found that the recent dramatic decline in the numbers of Song Thrushes has been caused by a reduction in the survival rate of young birds. This information will help us to identify the environmental factors responsible for the decline.