Bringing the wonder of Osprey migration into the classroom. 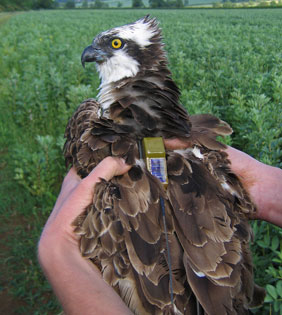 The annual migration of Ospreys between Europe and Africa is a journey that captures the imagination like few others. In recent years advances in satellite tracking technology have enabled us to follow individual Ospreys on their 3000 mile migration in incredible detail; from remarkable night-time flights across the Bay of Biscay, to the long arduous crossing of the Sahara, we have been able to follow them on every leg of their journey. The latest GSM transmitters – which provide data every minute – can even show how Ospreys are able to use thermals to aid their flight.
Satellite tracking provides valuable scientific data, but it can also link people along migratory flyways. In September 2012 thousands of people were following the autumn migration of a satellite tagged Osprey from Rutland Water. The bird, known as 09(98), had reached the northern reaches of the Sahara in a matter of days, but then sadly things went wrong.  The satellite data indicated that he hadn’t moved off a ridge on the northern edge of desert for three days. In other words, either the bird had died or the transmitter had fallen off.
Despite the fact that 09’s transmitter provided highly accurate data, the one thing it couldn’t tell us was what had happened to the bird. What we needed was someone to go and look. With that in mind I emailed a few contacts in Morocco.

Amazingly Farid Lacroix immediately offered to help. Farid turned out to be an ex search and rescue helicopter pilot, originally from France but now living in Agadir.  His career had taken him all over the world, and most significantly of all from our point of view, into the desert. When he saw our appeal for help he immediately got in touch and offered to drive the 250km from Agadir to the spot where we had been receiving transmissions from 09’s satellite tag since 3pm on September 11th. The Sahara is not the sort of place you can take lightly – conditions can suddenly deteriorate in a matter of minutes – but Farid’s experience meant he was well-qualified to deal with the worst the desert could throw at him. 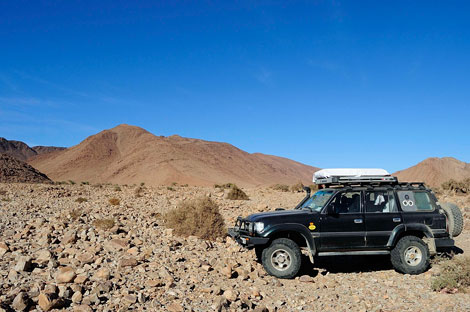 Using his GPS as a guide he eventually reached the foot of the mountain where the satellite data showed 09’s tag was lying. In Farid’s own words, “climbing this mountain was very hard and maybe dangerous.” That was an understatement, but unperturbed he set off up the mountain with a 15kg rucksack containing 3 litres of water, some food, a survival blanket, a satellite phone in case of an emergency and his camera equipment. His route up the mountain, which involved more than 1000 feet of climbing on loose shale, would be difficult enough on its own, but the searing desert temperatures made the climb even more demanding.

The accuracy of 09’s GPS transmitter and the fact all the fixes were from exactly the same position, meant that once Farid had scaled the steep scree slope, it did not take him long to find the transmitter. We had been hoping that the transmitter had fallen off and that 09 had continued his journey towards his wintering grounds, but sadly Farid immediately found evidence that proved otherwise – a pile of feathers and bones and 09’s two leg rings, along with the transmitter.
So what was it that killed him? A look at data from his transmitter’s activity meter suggests he was alive until the early hours of 12th September, suggesting that he was predated by either an Eagle Owl or a mammal – perhaps a Jackal – during the night or very early next morning. This theory is given more credence by the fact that Farid found 09’s remains a few feet from the branch where he would have been roosting; tell-tale white excrement suggesting he had been perched there for some time. Perhaps conditions in the desert were poor for migrating on the afternoon of 11th September, forcing 09 to cut-short his day’s flight?
Although 09’ story is a sad one, Farid’s amazing dedication and determination to solve the mystery demonstrates the unique ability of migratory birds – and particularly Ospreys – to link people and communities across the world. This kind of international collaboration and friendship is vital if we are to protect migratory birds, and it is this concept that underpins World Osprey Week.

In 2011 myself and colleagues from the Leicestershire and Rutland Wildlife Trust set-up the Osprey Flyways Project. The key aims of the project are to link schools along Osprey migration flyways and to provide wildlife education opportunities for schools in the key over-wintering areas. Over the past four years the project has slowly grown both in scale and scope, and this year we organised the inaugural World Osprey Week. World Osprey Week – or WOW for short – which was held during the last week in March, was timed to coincide with the northward migration of Ospreys from Africa to Europe and also from South to North America. Schools could register for WOW on the Rutland Osprey Project’s website and then log-on to an interactive map to follow the journey of nine satellite-tagged Ospreys as they flew north to nests in North America, Corsica, Finland and the UK. They also had the opportunity to create their own page on the website, and to get in touch with other schools elsewhere on the migratory flyway. In addition, registered schools – both primary and secondary – had free access to a range of teaching resources based around Ospreys and Osprey migration that covered just about every subject on the national curriculum. There is even a series of Geography lessons devised by Alex Kilford from St Mark’s Academy in London that could occupy a full term’s worth of geography teaching. 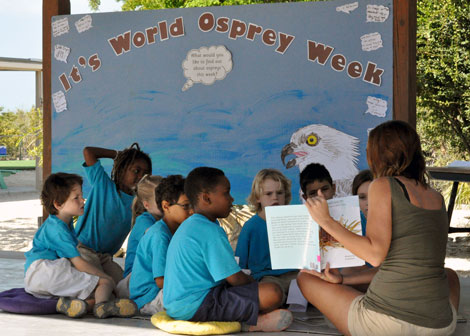 In all a total of 104 schools from nine different countries registered for the first World Osprey Week. The schools – including one from the Turks and Caicos Islands in the Caribbean – incorporated Ospreys into their teaching in different ways, but all agreed that it was an innovative and exciting way for the students to learn. Year 5 class teacher Ben Vincer, from Tenterden Junior School in Kent said, “As a teacher, it was great to explore a different area which created so many different links across the curriculum.” And from Sian Jones, Principal of Provo Primary School in the Turks and Caicos Islands, “Thank you to everyone at the Leicestershire & Rutland Wildlife Trust for organising this wonderful WOW celebration and encouraging us to learn more about the Ospreys that live here in our islands. It has been a great success and the interest of the children and the support community has been amazing. A true example of learning at its best! ”

The culmination of WOW at Rutland Water was a four-way Skype call between students in the UK, Italy, Spain and the United States.  If technology hadn’t failed at the last minute then a fifth school from The Gambia in West Africa would also have been included. It was exciting to see children from different backgrounds and separated by thousands of miles, getting together with Ospreys as the common link; certainly a fitting finale for the inaugural WOW. You can watch a video of the Skype call here http://youtu.be/r6J-0HUM6L4.
With the first WOW an undoubted success, it is hoped that 2015 will be even bigger and better. Schools can register on the Rutland Osprey Project’s website for WOW 2015, which will have an improved interactive map and additional teaching resources developed by ex-teachers and Rutland Osprey Project volunteers Jackie and Pete Murray. Registration is very simple and can be done by visiting http://www.ospreys.org.uk/wp-login.php?action=register . Once registered, teachers can download the teaching resources for free – there are now 14 primary and 24 secondary lesson plans – and also set-up a page for their school. Once they have set-up their page – which is very easily done by completing an online form – they will be added to the interactive map, allowing teachers from other schools to get in touch.
WOW 2015 takes place from 23rd-29th March 2015. If you are a teacher, or know a teacher or other educational organisation who may be interested, why not get involved and find out how these amazing birds can provide a unique and exciting learning experience for all. With a bit of luck it will help to encourage the next generation of conservationists. Some of them may even have the same levels of dedication as Farid Lacroix!

For more information check out:
www.ospreys.org.uk/world-osprey-week.