Thinking back to my childhood, in my case that almost translates to the dark ages, one of the most impressionable birds I observed was the Avocet. I am at a loss to think of a more elegant or striking bird than this most beautiful of waders. Obviously the national charity in the United Kingdom thought so too, the Royal Society for the Protection of Birds made the Avocet their emblem and soon it was internationally recognised as an icon for bird conservation. In Britain it became extinct as a breeding species during the 19th century, but through concerted efforts and habitat management it repopulated the marshes of Norfolk and Suffolk in the 20th century, returning to Norfolk in 1941 and Essex in 1944, later they were soon re-established in Suffolk (1947). 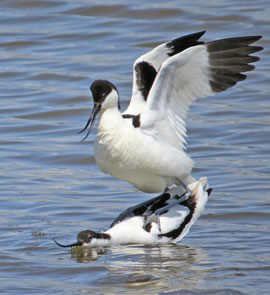 It was easy to believe Avocets were critically endangered as a species during my formative years, but then again I was young and had such an insular view on nature in general, influenced as I was by my interests in British fauna and flora. Actually, nothing could have been further from the truth as this species thrived across suitable habitats throughout Europe! Here in Andalucia they not only share typical habitat requirements with other specialists such as Greater Flamingo, but alongside Black-winged Stilt they are also surprisingly opportunistic. We can often find isolated pairs on very small marshes and lagoons, as some seemingly prefer to nest and feed in smaller and less saline pools, lagoons, muddy arms of deltas, and estuaries, and sheltered muddy tidal flats where ample loose sediment is rich in food organisms suitable for working with its peculiar bill, mostly in under less than 15 cm of water. During the breeding season they differ from Black-winged Stilts, insofar as they are confined to almost bare surfaces to very sparse low vegetation for nesting.
Our local breeding birds tend to leave their breeding grounds during the second half of July, normally dispersing to areas similar to breeding habitats, although their choices are widened by a freedom to occupy mudflats and shallow water farther from suitable nesting sites. Some of the largest concentrations of wintering Avocets can be found in Iberia, though substantial wintering flocks, numbering several thousands, spend a good part of the winter across the Strait of Gibraltar in Morocco on the tidal marshes, especially Merga Zerga (Moulay Bousselhame). During late October local birds can be joined by populations arriving from Northern Europe, after they have completed their autumn moult, these birds arrive after they had gathered in their thousands on special moulting grounds in Heligoland Bight (from Römö, Denmark, to Dutch Waddenzee) and in the Dutch delta region. 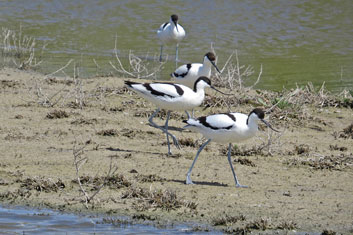 Avocets are highly social and gregarious for much of the year. Outside of the breeding season it is not uncommon to see flocks numbering in excess of 20 birds, even feeding cooperatively where advantageous i.e. on Neomysis shrimps. Flocks can be hundreds strong as winter progresses, but gradually these flocks disperse throughout late February and early March as small groups start to wander back to their breeding grounds. Normally our local birds tend to be on their chosen breeding territory by late February or early March, whilst others drift through northwards. Breeding birds appear to arrive as established pairs, bonds probably being formed during late winter, there is no evidence they remain paired during winter. Throughout our region there are several small sporadic lagoons (not annually filled with water), and although colonies are often located at traditional sites or areas where water conditions are relatively stable, especially in temperate parts of their range, these typically impermanent waters are more ephemeral and the birds nomadic, settling to breed where temporarily possible.

Once our birds have arrived at their chosen breeding territory the nest is built by excavating a scrape, then lined and built-up mostly with short stems, grasses and leaves found locally, either slightly raised in water (using a small mound) or very near to the water’s edge, it can sometimes be in short vegetation, but again still very near to water. Both adult birds build the nest and a single brood of between 2 to 5 eggs are laid. Although single brooded, a replacement brood may be laid in the event of loss i.e. raising water levels or predation. Incubation lasts for between 20 to 28 days and the young hatch asynchronously depending how staggered the eggs were laid. The young are very soon able to walk and feed, but are still tended and brooded by both parents. After around 35 to 42 days the young are fully fledged, although they can still be very much dependent on both parents. To summarise the eggs are normally laid towards the end of April, hatched during late May and young usually fully fledged by July. The young will mature to become breeding adults after 2 years, though a few will delay breeding until they are 3 years of age.