The small river—more like a big stream, flowed noisily down the mountain. I could probably jump it if I got a running start, but with all my birding and camera gear that was looking like a bad idea. The old man whose barn we’d slept in the night before had told us to be careful when we came back down—that we should stay between the rivers. “Don’t cross the water! If you do, two things will happen: your feet will get wet and you will get lost!”
Well I was lost. And my feet were already wet from the steady rain I’d been walking in for the past hour. Getting lost on this mountain was a bad idea. Bad things could happen and getting lost was the least of my worries. There were other dangers far more serious. I turned around and began walking back up the very muddy track the way I’d come.
The path I was slogging up was on Mount Kitanglad on the island of Mindanao in The Philippines—home to the world’s largest raptor, the Philippine eagle. I, along with eight other birders, had come to The Philippines as guests of the tourism authority, to experience the birds of this nation of islands. The main part of our 12-day trip had ended two days before and a handful of us signed on for the extension trip to Mindanao. This was the only chance we’d have to see the massive Philippine eagle, one of the most endangered raptors of the world.
There are more than 7,100 islands comprising The Philippines and on our familiarisation trip, we’d visited just a fraction. As most bird watchers know, islands are often home to endemic species—birds found there and nowhere else. We’d encountered endemic birds at Subic Bay, in Candaba Swamp, on Palawan, Cebu, Olango, Rasa Island, and even around the metropolis of Manila. We’d also, sadly, witnessed vast areas of these same places that were being timbered, mined, turned into agricultural use, or simply encroached upon by an ever-expanding human population. Our Filipino birding guides and the members of the Bird Club of The Philippines indicated that saving the endemic birds of their country is a race against time and a fight against the power of the multinational corporations hungry for the rich natural resources of this emerging country. 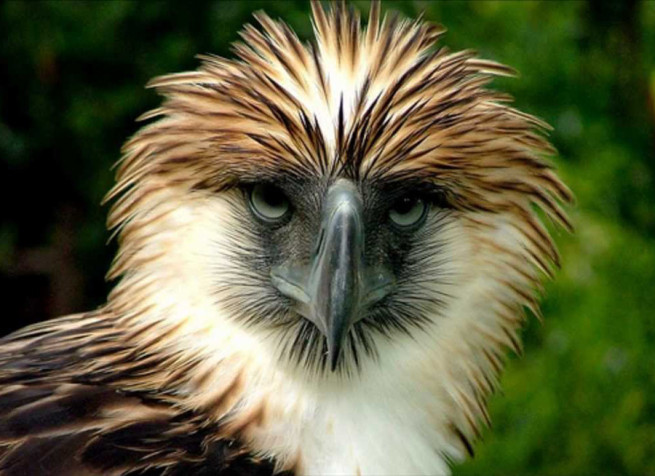 The avian highlight of the trip was the extension tour at the end, the trek up Mt. Kitanglad to view a distant (but reportedly still active) nest of the Philippine eagle. We were given fair warning that this trip would be physically challenging with segments we would hike and one stretch we’d traverse via horseback. The island of Mindanao, where the Mt. Kitanglad eagle nest is, is one of the largest and wildest of the islands in the Philippine archipelago. It is also home to a number of rebel and terrorist groups and the accompanying concerns about attacks and kidnappings, according to the U.S. State Department Travel Warnings website. However, I was reassured that the regions of greatest danger were in the southern parts of Mindanao, far from where we’d be travelling. 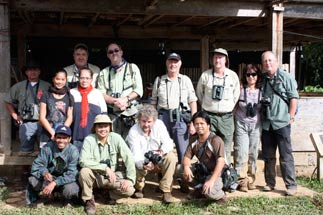 Our group consisted of seven visiting bird watchers (BT3, Mari from the U.S. Tim, Chris, David, Ray, and Duncan from the U.K.), three Filipino birding guides (Nicky, Adrian, and Ivan) and one Filipino ground agent, Cesar. We left our hotel at 3 am for the 5 am flight to Mindanao. From there we drove about an hour to a small village at the foot of Mt. Kitanglad, arriving around mid-day, along with a soft drizzle. Here our luggage and gear was wrapped in plastic tarps and tied onto the saddles and backs of small horses. We got somewhat conflicting information on how long we’d be hiking up the mountain to The Philippine Eagle Ecolodge. Three things were certain: it was going to be muddy, it was going to be a rugged trail, and we were going to get wet. We were each offered a horse to ride and a few intrepid souls took to the saddle. I was one of these, though the size of my mount and the length of my legs were not a good match. It was nice to be riding and my horse was sure-footed crossing streams and traversing muddy patches, but the wooden pommel of the saddle struck me in a particularly unpleasant spot, and so I gave up my mud-spattered pony for the shoe-leather express.
We hiked up the mountain all afternoon, the sporadic showers keeping the outside of our rain jackets as wet as our uphill exertions were keeping the inside of our jackets. Late in the day we arrived at a clearing, in the middle of which was an open-sided, two-story barn with a cement floor and tin roof: the eco-lodge.
Muddy, tired, and thirsty, we unloaded the gear from our backs, necks, and hips as our local horsemen stripped our bags from their animals. Refreshed with a cold drink and a late lunch we secured our sleeping spots in the upstairs loft. We birded around the lodge grounds until dark, when we went out seeking an ultra-rarity, the Bukidnon woodcock. We heard the bird calling just after dusk and tried to locate it. All we could manage were glimpses of the bird as it flew in low, courtship display around the clearing. One of our group bird photographer David Tipling, was much luckier. David managed to get a shot of a flying woodcock, using his camera’s flash to illuminate the night. The resulting image was astonishingly good considering the circumstances.
Facing a big day the next morning, we soon retired to the upstairs loft and our bedrolls. It was cool at night at this altitude and with the mixed sounds of rain on the tin roof, and the night sounds from the forest, I was soon deeply asleep. During the night at least eight sawmills began operating in other parts of the lodge’s loft. It was such an amazing chorus of snores that I actually recorded it with my digital recorder. Rather than giant stacks of milled lumber, I awoke to my bleary-eyed fellow travellers already getting up for the day’s big adventure. We pulled on our wet and muddy clothes and ambled downstairs for brekky.
On the ground floor, fog and rain greeted us, but the hot food and coffee lifted our spirits sufficiently and soon we were on our way, hiking up the rough and sloppy path toward the eagle-viewing site.
The critically endangered Philippine eagle was first discovered in 1897 by a European ornithologist. Endemic to the Philippines, it was originally called the Philippine monkey-eating Eagle due to early (and inaccurate) observations on its prey preferences. It’s one of the largest and most powerful eagles in the world—rivalling the harpy eagle of Central and South America in its ability to capture, kill, and carry large prey items. Its powerful flesh-tearing bill, long legs and piercing talons are ideally suited to plucking prey items out of the branches of giant rainforest trees. Main prey items of the Philippine eagle are flying lemurs and civets (an arboreal mammal), plus large snakes, lizards, and birds (including hornbills!). These huge raptors require large tracts of rainforest (as large as 50 square miles) for nesting and hunting. Sadly, habitat loss, timbering and mining, and subsistence hunting have had a heavy impact on the species’ population. Current population estimates have fewer than 500 pairs of Philippines eagles on the islands of Mindanao, Luzon, Leyte, and Samar. Philippine eagles do not breed until after they reach full adulthood after five years of age, and then they only produce a single egg. If the egg hatches and the eaglet survives, its parents will care for it for two years—not a high rate of replacement for a critically endangered species.
Mt. Kitanglad, up which we were now trekking, is one part of The Philippines where land has been set aside for the Philippine eagle, which became the national bird of this country in 1995.
From my field journal:
We left before dawn. It was a wet, slippery hike up to the plateau from where we were to look for the eagles’ nest. En route we passed through deep forest broken up by clearings where subsistence farmers and their families were living. We would have to get above the deforestation if we were to get into prime eagle habitat. Wood smoke smell filled our heaving lungs as we climbed higher and higher, the day’s humidity already soaring, turning air into water. We got some good birds along the trail: Tawny Grassbird, Pygmy Woodpecker, Mountain white-eye, and a tiny hanging parrot known as the Colasisi. After an hour-plus hike we arrived at the overlook opposite the eagle’s nest. Our guides knew just where to look. Far across a mist-shrouded valley we could just barely make out a mostly grown eaglet on the nest. As we watched through spotting scopes it alternately jumped and flapped its wings, and absent-mindedly preened while waiting for a returning parent. 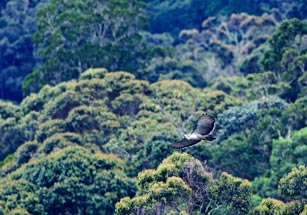 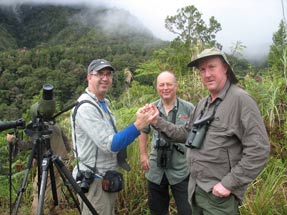 We walked at an angle through his fields, up the mountain, across two small streams, and about a third of a mile farther along we came to a wide trail between two huge trees. “Eagle lodge” he said again and pointed to the trail. To my great joy, I could see the distinct footprints of large-size European boots, headed down the trail and down the mountain. I thanked my friend with a handshake and a smile, and turned to go, then bade him stay a moment longer. I took my blue, long-sleeved Ohio Ornithological Society T-shirt off and handed it to him, with a bow of thanks. He smiled and held it up—it would be huge on him. Still, I think he appreciated the gesture, and I surely appreciated his help. Once again, I’d relied upon the kindness of strangers to set me on the right path home.
I humped it down the mountain, through another big rain shower, noting with great relief the familiar landmarks from earlier in the day. I strolled into the clearing where the lodge was just as my fellow travellers were beginning to wonder where I could be. I saw Ivan and told him his advice had been good—don’t cross the river. He smiled and said “Glad you didn’t get lost, Bill.”
“Me too!” I said with a sheepish grin.
There’s nothing quite like having a bit of adventure along with your bird watching. Seeing the eagle had been a thrill—an once-in-a-lifetime opportunity. Sometimes the getting there and back is just as exciting.