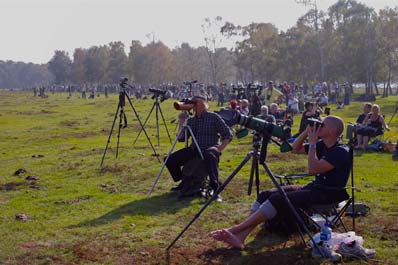 Every autumn about 500 million birds migrate across southern Sweden, mainly towards the southwest. The migration goes on night and day from the beginning of August until late October.

Trying to escape winter as far as possible, many of them are passing over Falsterbo peninsula, where they leave Sweden for Denmark.Falsterbo is at its best in the autumn, when the migration is concentrated and massive. Perhaps Falsterbo is best known for the migration of Honey Buzzards. The migration of mainly adult birds is concentrated in a few good days in late August and beginning of September.
One of the best days ever took place 42 years ago. It was a nice morning in late August 1971. It was sunny, with a warm breeze from the southwest, which meant perfect conditions for raptor migration. Lars Svensson, author of Collins Bird Guide, was just 30 years old at that time. His intention was to play golf at Falsterbo golf course that day, considered one of the best golf courses in Sweden. But at first tee about 250 Honey Buzzards appeared, soaring, and it got worse. He realized that something odd and fantastic was about to happen; he put the club back into the bag, and gripped his binoculars. That day more than 10,000 Honey Buzzards were counted.
The following years have seen decreasing numbers of Honey Buzzards, but gladly enough, this year seems to be a comeback for the enigmatic bird, which are wintering in the rain forests in Central Africa. Two days after Falsterbo Bird Show, where we saw just a few dozen Honey Buzzard, a massive migration took place. Over 4,000 Honey Buzzards, mostly adults went south. Even if Falsterbo has been best known for the migration of Honey Buzzards, there are several other species that come in great numbers. Last autumn was in fact a record season and more than four million birds were counted. One of the more spectacular events occurred on October 1st when 87,400 migrating Blue Tits were counted. The total number of migrating Blue Tits was 285,450, which is more than twice as many as the second best year. Blue Tits had a remarkably good breeding season last year. When they notice the shortage of beechnuts in the woods in southern Sweden they have to migrate to find food. For the same reason huge numbers of Bramblings and Chaffinches were leaving Sweden, a season total of no less than 2,442,950 Bramblings/Chaffinches. October 3rd was the best day with an incredible 380,200 birds. Just imagine the sounds of thousands of birds, where you can hear their steady wings beat and the constant contact calls of the Chaffinches “pink, pink”, accompanied by the Bramblings “dzhweee”.

The best weather to see big birds migrate is warm, sunny days with gentle winds from the southwest or west. The most common raptor is the Sparrowhawk. Last season 45,296 Sparrowhawks were counted. They have a much elongated migrating period, which begins in August and ends in late October. Second most common is the Common Buzzard. In 2010 more than 23,000 Common Buzzards moved south over Falsterbo. Pallid Harrier is one of the raptors that have increased the most. The last two years have seen 43 and 29 Pallid Harriers migrate south, which is very interesting. The species is spreading its frontiers more and more to the west.
Under the right conditions Falsterbo is undoubtedly one of the best places to witness massive migration of all sorts of birds in Europe. Every year Falsterbo Bird Show is held in the last days of August, during the Honey Buzzard migration, with a big number of exhibitors, lectures and a big and prestigious bird quiz competition between birders in Denmark and Sweden. Don’t miss it!