When it comes to birds, Israel and Spain have a lot in common.
Despite the significant difference in size, the fact that both countries are situated on parallel latitudes and boast a wide range of habitats contributes to their impressive natural wealth. It is not easy to compare the avifauna of both countries, after all Spain is about 17 times larger than Israel, but apart from their difference in size, Israel and Spain are very much alike.
Besides the good food, nice beaches and beautiful women Israel and Spain are probably the 2 most attractive countries for birdwatchers in Europe. The fact that Israel and Spain are situated between continents makes them important zoo-topical meeting zones. It is here that species of African origin have a foothold in Europe, and European species are at their southernmost points of distribution. This unique geographical trait shared by both countries makes them great places to observe fascinating families of birds of semi desert and Steppe terrain. Nowhere else in Europe can birders enjoy such a variety of hard to come by groups like Wheatear, Larks, Sandgrouse, Bustard and more.  Both countries offer visitors a chance to enjoy these birds of African and Asian origin alongside more familiar European species which are represented in the lusher habitats. 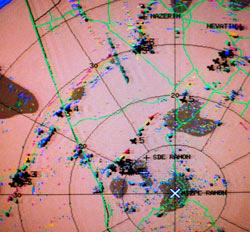 But the most important similarity between Israel and Spain is the fact that both countries lie under one of the biggest migration flyways in the world.  Neatly positioned on both sides of the Mediterranean Sea both countries are world famous for their awesome soaring bird migration spectacles. Every spring and autumn hundreds of thousands of soaring birds from European and Asian populations funnel through the airspace of both countries, on their way to and from the breeding grounds. These soaring birds that include White and Black Stork, Pelican, Crane and over 20 species of Birds of Prey rely on Israel and Spain as land bridges. Soaring birds prefer not to cross large bodies of water due to lack of developing thermals and the Mediterranean Sea is quite a serious obstacle to overcome. In order to avoid crossing the Med, soaring birds follow either the Eastern flyway, over Israel and along the Great Rift Valley to Africa or follow the western route through Spain southwards, and cross at the shortest water crossing available, 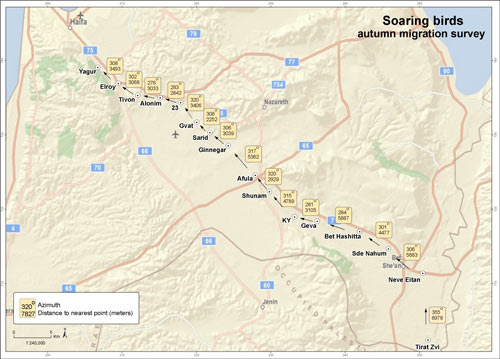 The Straits of Gibraltar.
When it comes to numbers both migration funnels hold impressive checklists. Around 250 species of migrant birds migrate through the Straits of Gibraltar every season, with soaring birds numbering well over half a million individuals. Israel boasts an incredible 280 species of migrants and over a million individuals are counted during the autumn migration season.  One of the iconic species that most symbolise migration is the White Stork Ciconia ciconia and Israel and Spain are the best places in the world to see the impressive large flocks that the species is famous for. Every summer following the breeding season, the whole Eurasian population of White Storks splits into two main “streams” for their southbound journey. Storks from central and eastern Europe migrate south and funnel through Israel, and the entire west European population of White Storks migrates south west eventually congregating at the Gibraltar Straits, and cross into North Africa.

During late August and early September a quarter of a million White Storks pass over Israel on their way south to their African wintering grounds. During the same period over 100,000 Storks gather at the Gibraltar Straits. Another important species that is best seen here is the Black Stork Ciconia nigra. Around 8000 Black Storks are counted over Israel every autumn and over 3000 pass at Gibraltar.
Both Israel and Spain operate long term counts and research projects on soaring bird migration. The Israel Ornithological Center has been actively monitoring soaring bird migration for 30 years! The project involves several weather radars now programmed to detect birds in the sky and a ground team of birders that is deployed throughout the width of Israel and “intercept” every soaring bird flock that enters the airspace. The Israeli project has two major causes, the first is scientific, to collect data and assess population trends in soaring birds. The second cause of the survey is to monitor the Israeli air space in an attempt to protect aircraft and pilots. In the past Israel suffered greatly from collisions with soaring birds, including the loss of 3 great fighter pilots and over a dozen aircraft. The Israel Air force now sponsors the counts and we are happy to    say that the survey method is fine-tuned and the transfer of information on soaring bird flocks in the skies is registered very quickly. The correct collaboration between birders and radars and with our gained experience we have now been able to lower our collision rates to below 2%! Thus we are protecting both the birds and the pilots that share the airspace.