I don’t know about you, but for me at least it seems just a short while ago that I sat near to Tarifa watching the large exit of raptors from Europe headed towards the near shores of North Africa. Every year, around the start of September, I am either leading groups or making my own pilgrimages to the Atlantic seaboard of Andalusia in search of the spectacle that is migration.

The sheer volume of birds involved in the autumn rush to leave for warmer climes is staggering. For the grand spectacle,  the larger migrants perhaps offer the audience the star attraction, but to see thousands of our smaller passerines, such as Bee-eater Merops apiaster, forming colourful clouds as they leave our shores is, I think, a sight that all should witness at least once in their lifetime.

Of course migration, whether in spring or autumn, can bring along the unexpected or very rare migrant. Apart from the now regular autumn visitor Rüppell’s Vulture Gyps rueppellii, a few autumns ago saw African White Backed Vulture Gyps africanus taking a bow! It all adds to the occasion and acts as a magnet for birdwatchers the world over.

So we can count our blessings, that we are very fortunate to live so close to areas where we can bear witness to one of the natural wonders of our world. It is almost impossible to absorb the spectacle of this number of birds, either leaving for or arriving from Africa, without being curious about why and how it is all made possible? 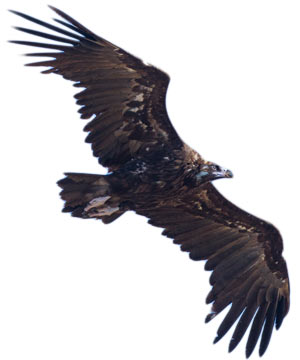 We are so very privileged to live in the southern reaches of the Iberian Peninsular. Here we are able to witness firsthand the incredible spectacle that is bird migration. Enormous populations of birds from the northern reaches of Europe become concentrated during the late summer and autumn as they approach the short sea crossing over the Strait of Gibraltar.

Larger birds, such as Eagles, migrate during the daytime when they are able to take advantage of rising thermals and up-draughts, whilst many small birds migrate at night and take their direction from the position of the setting sun. As well as seeing the sun go down, small birds also seem to see the plane of polarized light caused by it, which calibrates their compass. Travelling at night also provides other benefits. Predators are avoided and the danger of dehydration, due to flying for long periods in warm, sunlit skies, is also reduced. An added benefit to night migration is also apparent when the air structure is cool and smooth and conducive to sustained, stable flight.

Flight gives birds the power to fly in any direction for as long as they have the energy to keep going. They have lightweight, hollow bones, navigation systems that simply defy belief, and an ingenious heat-conserving design that concentrates all blood circulation beneath layers of warm, waterproof plumage leaving them fit to face life in extreme climates.

Bird migration occurs in each natural region of the world, each country, each county and even each parish, where birds will come and go with the seasons. Many make vast journeys to reach their wintering grounds. Swallows, for example, may breed and spend the summer in one place, but spend most of the rest of the year travelling back and forth to their wintering grounds in southern Africa..

Bird migration evolved as a way for birds to exploit resources that are seasonally abundant and, equally important, to go elsewhere when the resources become scarce or harsh weather arrives. Many species can tolerate cold temperatures if food is plentiful, but if food is not available they must migrate. I suspect the secrets of bird migration will remain as curious as any of life’s other unsolved mysteries. Sadly, some never complete their journeys, but I always look forward to the spring and the return of those who have survived.

For all the complexities of migration I consider myself lucky to live in ‘The Magic Corridor’ that is for many European birds the main flyway for autumn and spring passage.
Some viewing areas to watch both spring (March/May) and autumn (August/October) migration:

Tarifa area: Strategic observatories can be found both east and west of Tarifa and these are Algarrobo, Cabrito, Cazalla, Santuario, La Peña, Puerto de Bolonia and Puerto de Facinas.