The Cinereous Vulture, Aegypius monachus, formerly known as the Black Vulture, is classified as near-threatened at world level (Collar et al. 1994). A. monachus is widely distributed, with a continuous range extending from Europe and North Africa through the Middle East to Mongolia and China (Appak, 1992). It has since been extirpated in most of its European range. Its only remaining stronghold in Europe is in Spain. Populations exist in Greece (20 pairs), Bulgaria (1-2 pairs), Turkey (100-500 pairs), Mallorca (70 birds; 4-5 pairs), and France (4 pairs). The entire European population is estimated at between 1,100 and 1,500 pairs (Edward, 1998). There is little data regarding its status in the East but it is the largest of the Old World raptors. The Cinereous Vulture is popularly known in Tibet as “XiaGuo” or “Dog-headed Vulture” and in Northern China as “Mountain Eagle”, “Gucha” in Qinghai. Records of it being kept in parks date back over a long time, but give no data on breeding. It is also called “Hairless Vulture”, due to the naked appearance of the head and neck, covered with brown plumules. In the Tibet region the names “God Bird”, and in Mongolia “Grand Eagle” show that it is an object of religious veneration (Ye Xiao-Ti, 1991). 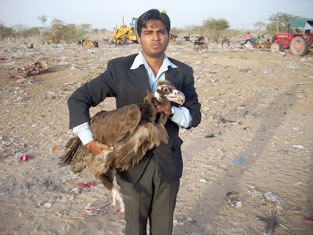 On characteristics, the species has a massive bill, short neck, extremely long and broad wings, and short tail. The wing span ranges from around 8 feet (2.44m) to 9 1/2 feet (2.90m) and weight varies from around 15lbs (6.80kg) to as high as 27lbs (12.25kg). Females are generally the larger sex. Sexes are almost similar in appearance, with no seasonal variations. Adult plumage is a uniform sooty-brown (Edward, 1998). Head skin and neck are rather dark and the head is covered with a thick downy feather which tends to give the rear of the crown a tufted appearance (Hiraldo, 1983). The Cinereous Vulture forages over many types of habitat including semi-desert and steppe to upland grasslands and bare mountains. It tends to breed below 3,500 feet (1,066m) in Europe and below 7,000 feet (2,133m) in the Asian portion of its range. The species prefers arboreal nest sites, but occasionally uses rock ledges or crags and feeds on carrion, mainly from medium to large carcasses. It will rarely take live prey, but will take injured animals sometimes. It is dominant over all other Vulture species at a carcass. Conservation Status listed in Appendix II “Threatened”, a species likely to move into the “Endangered” category in the near future.  In the Indian sub-continental, for the first time, discussions were held about the conservation and population aspect for this species.  Rajasthan is most important area of Vulture concern. This state is attached with Pakistan in the North and North south area with Gujarat (Ran of Kach). In India the largest dead animal dumping site is situated in the Bikaner District of Rajasthan. We are monitoring all Vultures’ species population at this feeding site. Over 3 years (2009-2012) in winter (November to February) population counting was undertaken to assess the importance of this particular site.

Methods
For Vulture counting we use standard methods; Bibby et al., (2000); Nichols et al., (2000) and Ralph & Scott (1981)) utilising standard report forms which are completed for all visits, recording the date of the visit, transit line name and locations. We are using this methodology for the counting of Vultures in the morning (07h30–09h30) and afternoon (13hr30-15hr30) with line transit. In our survey period we also record the total number of dead animals arriving daily on the dumping site and their utilisation stage.

Result
Total number of  population of  A.monachus in Jorbeer dumping site means values of different line transit in mid months (Table below). Highest population of Cinereous Vulture reported was 65 in December, 2012.  Veterinary use of Diclofenac, a non-steroidal anti-inflammatory drug (NSAID), is the main factor responsible for the declines of species of Gyps Vultures in South Asia. Studies have established that Diclofenac is toxic to Vultures (Oaks et al., 2004; Swan et al., 2006) and is widespread in cattle carcasses across India (Taggart et al., 2007) at sufficient concentrations to be the principal cause of the declines (Green et al., 2006, 2007).

* Extreem population in this month

During 2000-2002 showed 28 cases of Avian Gout, while 17 samples did not exhibit Avian Gout in Pakistan (Oaks et al., 2004). The major concern arising from this availability of dead specimens of A. monachus was not only the fact of discovery after the ban of Diclofenac, but the widespread availability of Diclofenac for sale for veterinary use after the June 2006 ban. In recent years the use of NSAID’s (veterinary painkiller- Diclofenac) for animal treatment has led to the poisoning of a number of Vultures and their breeding rate has declined.
In context, the effect of veterinary painkiller (Diclofenac) was apparent in 3 dead specimens of A. monachus collected in February 2012 and again 2 dead specimens of A. monachus was reported in March 2012 during the vulture survey in the municipality of the dead animal dumping site (Jorbeer) (71054 and 74022  East longitude and 270 11’ and 290 03’  North latitudes). In the year 2012, we found about 90 similar cases in 4 vulture species Egyptian Vulture, Neophron percnopterus, Indian Griffon Vulture, Gyps fulvus, Himalayan Griffon, Gyps himalayensis, and Cinereous Vulture Aegypius monachus, and one raptor, Steppe Eagle, Aquila nipalensis, affected by the dumping of dead animals contaminated by Diclofenac. For the protection of important Vulture’s species we need more open and safer food zones.

Acknowledgments
We would like to thank my co-worker Mr. Deeraj and Mr. Hanesh for their help during the fieldwork and for various rescues of afflicted birds. I also thank the Forest Department for their wonderful support and providing zoo facilities after rescue operations.