Recorded at a site near Casares, Andalucía – Southern Spain. 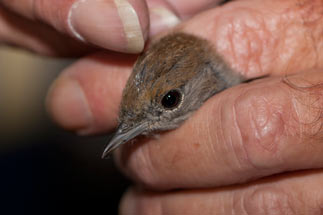 During the summer birds of the smaller sub-species S.a. heineken breed throughout Andalucía and their song is a common feature on early morning walks. After the young have fledged some S.a.heineken head south to the African continent but others stay during the winter and are joined by the larger nominent S. atricapilla from northern Europe. It is the latter that are the subject of this study.
It is well documented that migrant species return to their natal area to breed in subsequent summers, but little has been written of similar behaviour exhibited by wintering passerines. Since bird ringing began on the study area in 2002, detailed records have been kept of all birds caught. These provide the basis for this winter site fidelity analysis.

The study area
The 2.6 hectare site is situated on the south-eastern facing slope of Sierra Molina, 2km southwest from the “white village” of Casares. At an altitude of 300 metres it still enjoys the ameliorating effect of the Mediterranean Sea. The dominant trees are Olive Olea europea, Carob Ceratonia siliquae, Fig Fiscus carica, Oak Quercus canariensis and the smaller Holly Oak Quercus coccifera. Beneath most of these is an under story of dense scrub, mainly Pistachia lentiscus and P. terabinthus. Intertwined with them in large areas is an almost impenetrable growth of Smilax aspera.

The whole area provides abundant shelter, food and protection. The grassland is cut each summer to provide some open feeding areas and to reduce fire risk. Over 200 different species of wild flowers have been recorded with new ones discovered annually. Invertebrates of many families abound. More than 900 species of moths and 20 species of butterflies have been photographed. The multitude of beetles, flies, crickets, grasshoppers and a host of other insects await investigation. Such a plethora of wild life indicates a healthy dynamic environment and an abundant source of food for the birds. In addition to the invertebrate food available, berries on Pistachia lentiscus ripen progressively during the winter as do the wild olives, both popular with the wintering birds. Towards the end of winter, fruits on the Dwarf Fan Palms Chamaerops humilis ripen. They are similar to small dates, rich in sugar and a favourite food for fattening Blackcaps preparing for the long flight northwards. No insecticides or herbicides have been used on the site during the last twenty years. Rainfall is normally heavy during the winter months, but sparse between May and October, so the only water available then is that which we provide.

Winter site fidelity.
Depending on the prevailing winds, the first “long winged” Blackcaps arrive from the north during the last few days of September, but more commonly in early October. These birds comprise two different groups. Some are still carrying large amounts of fat and weighing over 20 grams and are presumably on their way further south. (Records show recoveries as far south as Gambia)
The majority are leaner with weights within the usual range of 16-18 grams. Many of these are retrapped during the winter months as they feed on the abundance of available food.

By the end of December 2012, 1,952 Blackcaps had been ringed in the study area, of which 1726 have been during October – March. (Fig. 1)
In this analysis, Blackcaps caught during the months April – mid September have been excluded as have birds with a wing length (carpal to wing-tip) of less than 73mm. This is the point at which the nominent species and sub-species overlap.
Of the 1,726 Blackcaps ringed during the winter months, 75 individuals have been retrapped in one or more subsequent winter, some only once, but L875800, a juvenile female, wing length 77mm, ringed on 11 January 2004 returned for 6 more winters. Not all our birds are caught every winter. Some are missed but reappear in subsequent years.
Some of the birds arrived with rings on already. These were from Gibraltar (2), France (1), Belgium (6) and Holland (2).
One bird of particular interest, 11060918, ringed in Belgium (ringing details still awaited),  was controlled on site 5th & 12th December 2009, (a juvenile male, and 74mm wing length).
It was caught again 13th December 2010 (adult male, 75mm wing length).
There must be something about the study area that the birds like!

“The day-to-day mechanics of research are routine, and the essence of scientific enquiry is measurement. To describe is one thing, but to quantify is far better”.
Prof. T. Norton 2002
Prof. Trevor Norton. Reflections on a Summer Sea.  p128. Published by Arrow Books 2002

Collection of the above data was only possible with the help and co-operation of numerous members of Milvus GOES Bird Group: www.goes@grupoornitologicodelestrecho.org

My thanks to you all, you know who you are.