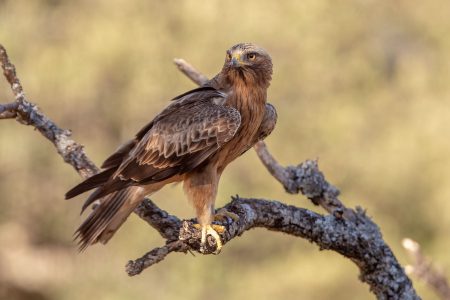 Here in Andalucia we are blessed with having no less than 5 species of eagle, which live and breed here. To give that fact some perspective, remember that poor old Britain has only 1 species. Another example of just how rich the birdlife is, here in Southern Spain. One of our most familiar raptors, the Booted Eagle is the smallest of those 5 species, with a length of 42-53 cm and wingspan of 110-135 cm. The next eagle up in size is the Bonelli’s, which was featured in our first issue.

Descriptive and behaviour notes.
Identification of Booted Eagles should be simple; from underneath it’s a pale, almost white bird, with dark flight feathers. The head, neck and tail are darker than the body by virtue of grey/brown streaking. Easy! However, about a third of individuals are dark phase, which can be mid or dark brown underneath, and rather confusingly like a young Bonelli’s to the beginner. All three have similar backs, which are shades of brown, but look for pale patches on the upper wings, and sharp corners to the short tail. Also, about 75% of all Booted Eagles show the small white patches on the front of the wings where they meet the body, irreverently called ‘landing lights’. The birds themselves seem not to mind the difference; I saw a mixed pair recently hunting together near Ronda. Booted Eagles are about the size of Buzzards but the flight is more ‘stately’, with deep wing beats, longer glides, often on a straight course. If you’re counting, the hand has more fingers and is wider. Also when soaring, the hand often tends backward in a characteristic gentle curve giving the impression that the wing is not fully extended.

Habitat and Food
In Andalucia these raptors are relatively common around mountains/hilly country with scattered woods and open ground, though they are often seen over populated areas. Booted Eagles dive with folded wings on their prey, which is mainly smaller birds up to Dove size, caught out on the open ground. They will also take rabbits, rodents, lizards and insects. When hunting, I often see them being mobbed by Kestrels, which always seems ‘below the belt’ to me, as if finding food isn’t hard enough! 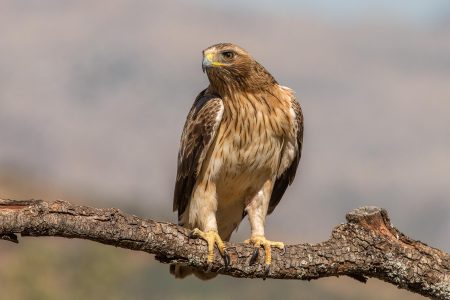 The eagles are mainly tree nesting, often on warm, sunny slopes. Rarely they will use cliffs. Pair bonds normally last for life and a pair will often reuse the same nest site each year. The nest is built by both the male and the female, with the eggs being laid between April and end-May, peaking around the last week of April. The females do the bulk of the incubating, and most often there are 2 eggs, leading to only 1 fully-grown nestling. Incubation is about 5 weeks, with the young staying in the nest for another 7 weeks. The survival percentage of the single chick to fledgling stage is quite high at around 80%, and interestingly one of the main causes of mortality is predation, often by the Eagle Owl (Bubo bubo).
The nestling becomes independent very soon after leaving the nest, at about 2 weeks, reaching adult plumage in the 3rd year. During the winter the birds are more solitary.

Status and Location
Most Booted Eagles are migratory; in Europe they breed across a region comprising of Southern and central France, most of Spain and coastal Morocco. A second European grouping is in Greece, Turkey and The Balkans. The full range extends eastwards to China. Also there is another population of birds breeding in South Africa. However, the largest population is right here in Spain, estimated between 3 – 4000 pairs. Our western eagles winter in sub-Saharan Africa, though a percentage will remain in Andalucia all year. The migrants arrive March/ April and return across the Straits in September or October.
They are common across the whole of Andalucia where the terrain is suitable, and they usually feature at some stage in our ABS Field day trip lists.