On the coast of Almería province, 18 kms east of Almería city and two kms north-west of the village of San Miguel de Cabo de Gata, the Junta de Andalucía’s 1:45,000 scale map of the Cabo de Gata-Níjar Parque Natural shows a narrow blue line running along the Rambla Morales and then widening out into a funnel-shaped lake labelled El Charco (The Pool). This substantial and unexpected body of water is blocked at the seaward end by the beach.
We first came across this site by chance, strolling to it one evening when we had our campervan at Camping Cabo de Gata a few years ago, before we moved to the area permanently. We found a gem of a wetland with tall reeds, fringing shrubs, open water, muddy edges; a rich mosaic of linked bird habitats. 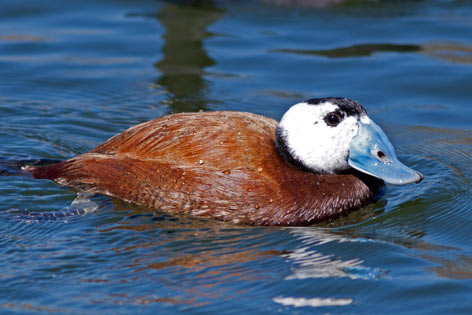 Photo: White-headed Duck are now found all over Andalucía.

That evening the open water, edged with thick vegetation, held a good number of White-headed Duck (Oxyura leucocephala) among much else. We’ve been back many times since and almost always see this quirky species. A Spanish ornithologist familiar with the site has told me that White- headed Duck like eutrophic conditions and that these occur at Rambla Morales when there is a lot of treated waste water being pumped there from the nearby village. This occurs in summer, for example, when there are more people staying on the coast and therefore more waste water. In contrast, after heavy rain, the water in The Pool is ‘cleaner’ and there is less chance of seeing the species.
It was not always as easy to see White-headed Duck at Rambla Morales as it is now. Between 23rd and 30th December 1984 a tragic episode in the story of nature conservation in Almería unfolded. A shooting festival was being held on the lagoons of the province. This was in the days when there was little protective legislation. Nevertheless, a group of ornithologists and conservationists, aware of the presence of a rare species of duck, were keeping watch as far as possible to monitor what happened. The conservationists’ efforts centred on the principle that the hunters could correctly identify this species, a distinctive diving duck with a noticeably bulging sky-blue bill, a white head patterned with black, a brown body and a prominently angled tail.
Despite its distinctive appearance, at least four of these ducks were verified to have been killed during the shoot. This was a species that, seven years earlier, in 1977, was considered to be down to 22 individuals in Spain, most of which were on a remote lake in Córdoba. (This site is so secret that I have not been able to find out exactly where it was!) As a result of the events of December 1984 the shooting of aquatic birds was prohibited in the province and five years later a number of ‘Reservas Naturales’ were designated, further boosting the chance of the species’ recovery.

The number of White-headed Duck began to rise but its troubles were far from over. By the late 1980s, Ruddy Duck (Oxyura jamaicensis), close relatives of the White-headed Duck, began to appear in Spain and consort with the White-headed Duck. The source of these Ruddy Duck was the rapidly expanding and forceful population in the UK. By 1991 the aggressive Ruddy Duck males in Spain were breeding with female White-headed Duck and producing hybrid young, raising concerns that the pure White-headed Duck would be genetically swamped and bred out of existence. In an attempt to stem this trend, by the turn of the century Spanish environmentalists had shot 98 Ruddy Duck and 58 hybrids. The thuggish image of Ruddy Duck was probably not helped by the fact that their penis is half as long as their body and that they abandon their partner after mating.
The focus of the issue meanwhile was moving to the UK, the source of the invasive Ruddy Duck. (Actually, the full story is even more convoluted, as the Ruddy Duck had only been introduced to England in 1948 by Sir Peter Scott, when three pairs were taken from North America to the Wildfowl and Wetlands Trust at Slimbridge, from where escapees soon occurred and a feral population established itself. By the year 2000 the UK population was about 5,000 birds.)
Initially, £800,000 was spent in the UK on assessing the feasibility of eliminating the entire British Ruddy Duck population. Under a pilot scheme a total of 2,500 Ruddy Duck had been shot by 2002. The issue was a source of intense controversy, with discussion of the ethics of introducing alien species and of ‘ethnic cleansing’, despite which the go-ahead was given in July 2002 for the culling of all UK Ruddy Duck. By early 2011, 6,200 Ruddy Duck had been killed in the UK at a cost of £4.6million, some £740 per bird. Only 120 remained and the policy was to pursue them until they had all been killed. Opponents of the scheme, such as Lee Evans, founder of the British Birding Association, continue to suggest that this expensive scheme is pointless, given that other European countries, including France, are not culling their Ruddy Duck populations.
Meanwhile, Almería province played a significant role in the reproductive success of White-headed Duck in the 1990s. Now, although its global status remains a matter of concern, the Spanish population of the species exceeds 4,500; a ‘good news’ story, unless you happen to be a British Ruddy Duck. White-headed Duck, and many other species – can these days almost always easily be seen floating in and out of the reeds that fringe the charco at the Rambla Morales, as well as at locations to the west of Almería city such as the Salinas de Cerrillos and the Cañada de las Norias.