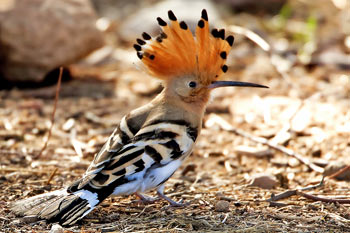 I guess the first impressions you get from seeing a Hoopoe for the first time is a mixture of the comical as well as the beautiful! With its striking colours and very distinct black and white wing pattern the Hoopoe is a favourite among even the most casual observer. The Hoopoe is a one-off polytypic species and is distributed widely throughout the Western Palearctic, but is only a resident in southern Spain, northern Africa, Egypt and the Lebanon. It is one of those birds whose presence during the winter months can more than make-up for the cooler temperatures.
In Andalucía we are fortunate to see these beautiful birds all year round and of course during times of bird migration the local birds are joined by those passing through on their way to northern and central Europe. Although a bird essentially of level or gently undulating terrain that has good areas of bare surface i.e. silt, rock and sandy soils, they have taken to the grassed golf courses of the Costas and are a common sight in coastal areas. They can be seen at varying altitudes within the province ranging from sea level to well over 1400m above. Here Mole-crickets and beetle larvae form the bulk of their diet, although they show a great liking for both larvae and pupae of butterflies and moths. So mostly their diet is insects and almost entirely animal, they are also known to take lizards, frogs, toads and very rarely bird eggs! It has a long and thin bill which suits probing soft ground and under leaf litter where I have seen it take millipedes and centipedes, but once I saw it grapple with a small scorpion and this makes the bird a friend of mine!! 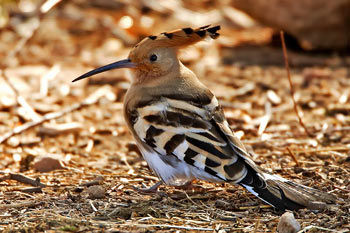 Hoopoes nest most commonly in the holes of trees, but are also known to use buildings and ground holes. Normally between 5 and 7 eggs are laid and incubation can range from 14 to 20 days. The young, which take anywhere from 26 to 29 days to fledge, are at first brooded almost continuously by the female and are fed by the female until almost ready to fledge when the male, although always the provider in the earlier stages, will also directly help feed the chicks. It is when the young are over 6 days old that they are able to largely prevent unwanted attentions from predators and of course yours truly. When disturbed they can exude an evil and intolerable smelling fluid from enlarged and modified oil glands and if this wasn’t enough they acquire the dubious ability to forcibly squirt a hatful of liquid faeces and gut contents accurately over a distance of 25 to 30cm. It is a good reason for telling people to pronounce the name Hoopoe as ‘Hoopoo’!!