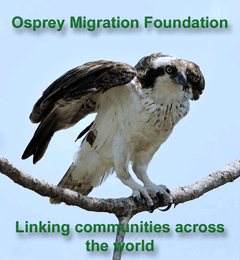 Ospreys are one of the most charismatic and cosmopolitan of all bird species. The species’ global distribution and migratory habits lend it to collaborative projects. As Yossi Leshem has demonstrated through his work in the Middle East, migrating birds like Ospreys cross national, cultural and religious boundaries and have great potential to link communities separated by hundreds if not thousands of miles. We believe Ospreys provide us with a truly unique opportunity to engage and link communities across the world. 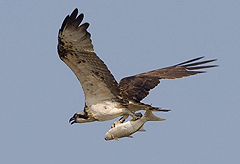 Most northern European Ospreys winter in sub-Saharan Africa. Recent advances in satellite tracking have enhanced our understanding of their migration greatly. GPS transmitters give hourly fixes for tracked birds, providing data on location, altitude, speed and orientation. This has allowed researchers to follow the journey of migratory Ospreys in unprecedented detail.
The work has shown that Ospreys from Western Europe – UK, Germany, France and Sweden – follow a westerly migration route taking them into Spain and across the Mediterranean into Morocco. They then skirt around the Atlas Mountains before crossing the western part of the Sahara. Satellite tracked birds have then wintered at various points along the West Africa coast – from Mauritania south to Guinea. The map below shows a typical migration from England to Senegal.

Birds nesting further east – in Finland and Estonia for example – use a more easterly route. They fly south through Eastern Europe and into the Middle East. From there they head into North Africa across the eastern part of the Sahara before wintering in countries such as Sudan and Cameroon. Others continue further south, with one Finnish-tracked bird wintering on the southern coast of South Africa – a record-breaking migration of 12,500 kilometres. 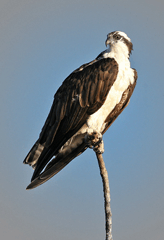 The Osprey Migration Foundation (OMF) has been set-up in order to link schools along Osprey migration flyways. Using satellite-tracked birds as a guide, the OMF has already initiated links between primary schools in England and The Gambia. Children at the schools have exchanged letters and videos diaries. With Ospreys as the common link, this provides them with a unique way to learn about other cultures, religions and languages. It will also greatly enhance their knowledge of bird migration.
The OMF now plan to expand the project to include schools along other major flyways. In Europe this will include both the western and eastern flyways as follows:

Along each flyway we plan to link each school with two others, thereby creating groups of three. The three schools will be from different cultural backgrounds. A link on the western flyway could include various combinations, for example: 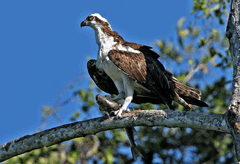 The link lends itself to children of all ages. The initial links between English and Gambian schools involve seven/eight year olds and thirteen/fourteen year olds.

Schools close to key Osprey breeding/migration sites will be approached by associate partners of OMF who will then visit the school in order to talk about the project and initiate the links.

The OMF will develop educational packs for each school involved in the link. This will provide teachers with sufficient background information on Osprey migration to introduce the concept to the children. It will also include lesson plans and suggested web links to further each school’s migration studies. 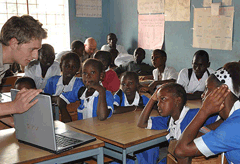 Although education packs will be provided for all schools participating in the project, the OMF will provide additional support for education in developing countries where facilities are limited. The Foundation is already providing educational opportunities for children in several Gambian schools through the provision of optics, books and computer equipment. This work is being co-ordinated in The Gambia by Junkung Jadama a local bird guide who is visiting schools to give talks and lead fieldtrips. This model could be repeated in other areas where education facilities are poor. Schools from more affluent areas may wish to hold fund raising events to assist with this education work.

As more schools join the project we hope to organise an international meeting for all of the children involved. The meeting would be held at a well-known migration watch point in the spring or autumn when large numbers of migrant birds, including Ospreys, will be passing through in spectacular numbers. The meeting would enable the children to experience migration at first hand, and at the same time, provide a unique opportunity to bring children and their teachers from many cultural backgrounds together. 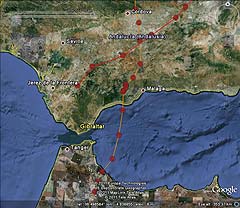 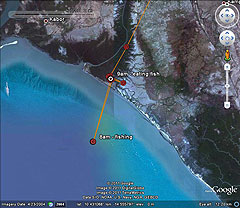 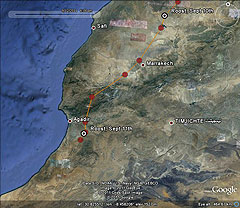 Our bird heads inland to roost and then makes its way south near Agadir to roost again 11.09.2011