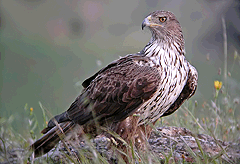 If you were to search for an emblematic species which would define the importance of the Serranía de Ronda for wildlife, then the Bonelli’s Eagle Hieraaetus fasciatus would be the definitive and unequivocal choice. Among the rarest species of raptor in Europe, the Bonelli’s Eagle has perhaps, for the moment, its highest breeding density in Europe right here in the Serranía! 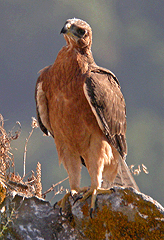 With a wingspan of up to 1.8 meters the Bonelli is a medium sized eagle and although it is known to very occasionally nest in trees, in the Serranía its preference is for rocky crags and faces. The pairs form lifelong and all year round partnerships staying in or close to their breeding territories throughout the year. Usually nests are re-furbished during late December and early January. During this period pairs can be witnessed indulging in flight-play with one, normally the male, dropping a stick and the other retrieving it before it reaches the ground! Copulation is indulged in by the late autumn and this maintains and strengthens bonds between the pair. The first egg can be laid as early as February and although a clutch of 3 is possible the most usual is for 1 to 2 eggs. Incubation normally takes around 40 days and usually a single young is fledged after a further 60/65 days, exceptions where 2 young are fledged normally relate to older and more experienced adults, these older birds seemed to have learnt to supply more food for the successful rearing of all their offspring. In the area of and surrounding the Serranía de Ronda, it is rare to see the juvenile birds remaining with their parents beyond September, in fact it is rare to observe juvenile or immature birds in the high mountains from late autumn. Many juvenile birds disperse and normally occupy low lying areas throughout the winter. 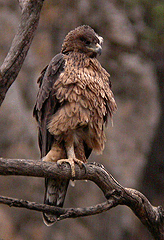 These eagles are extremely agile flyers and one of the most aggressive. Protection of the nest site during the breeding season is a spectacle that can provide the fortunate observer with a life time experience. The male will often pursue and sometimes inflict fatal injuries on much larger birds such as Griffon Vulture Gyps fulvus who venture too close to the nest. I have often seen unfortunate Griffon Vulture retreat from these areas minus a few feathers! Unlike many other eagle species, the Bonelli’s are capable of flying-down their prey and over long distances. Most large raptors avoid long distance pursuit in order to save energy, but these eagles, once giving chase, will continue to fly-down prey over considerable distances. Hare, Rabbit, Partridge and other large birds form the largest part of their diet, although some reptiles are also taken. Currently, and despite their aggressive protection of nesting sites, there is concern over loss of these sites due to pressures from increasing numbers of Golden Eagle Aquila chrysaetos and Griffon Vulture. 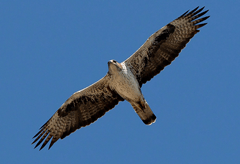 The current status of this magnificent and spectacular eagle is officially listed as being under danger of extinction. So it is essential we afford them the highest possible protection. Although some of their nesting sites are close to populated areas, they remain intolerant of human disturbance, so close observation should be avoided at all times. Also they tend to have defined hunting routes and are sometimes seen daily on these routes, so not only do their nest sites need urgent protection, but also their feeding areas. Their continued presence in the area depends on us and our willingness to afford them the special protection they need and deserve. Surely our skies would be the poorer without them. 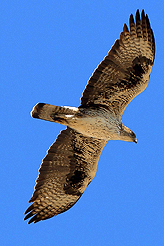 It has been estimated that an annual total exceeding 15,000 birdwatchers visit the Serranía and the surrounding areas, without doubt this eagle is a star attraction. So the Bonelli’s Eagle is most definitely important to the local economy! At the time of writing this article, many local people have become aware of the economical benefits of the birdlife in the Serranía, and in particular that associated with this fine eagle. Indeed, many locals now report illegal climbing and approaches to nesting sites here, a really positive and encouraging development. Any unwanted or unsustainable local developments that adversely impact on the numbers of this threatened species of eagle i.e. Los Merinos Golf, will by definition have a very real and negative affect on the area’s tourism, economy and people. The last point is well worth consideration given the present economic climate!

It’s that time of year for me to get around to various territories of Bonelli’s Eagle. I am fortunate to live in an area which has the highest density of breeding pairs in Europe, so now is a good time to check on the occupancy of the ‘known’ sites here.
These wonderfully entertaining and aggressive raptors are now very active in renewing pair bonds, displaying, copulating and jointly defending their chosen nest site against virtually any other large bird crazy enough to venture into their territory. Watching them attack the much larger species such as Griffon Vulture is truly a spectacle and bizarre given the bonelli is half their size!

Its pleasing to report all my sites are occupied again and I am looking forward to another season monitoring the success rate of breeding here. I’ll try to keep you posted.

Author: Peter Jones (Peter is a wildlife guide and is based in Andalucia)
www.spanishnature.com